Africans are increasingly exposed to climate risks, because draughts, floods and storms get ever more forceful. The African Risk Capacity takes a promising innovative approach to managing these risks. The idea is to use insurance to prevent natural disasters from becoming humanitarian disasters.

contributed to D+C/E+Z in summer 2018 as Head of Corporate Communication at the Nigerian Export-Import Bank. 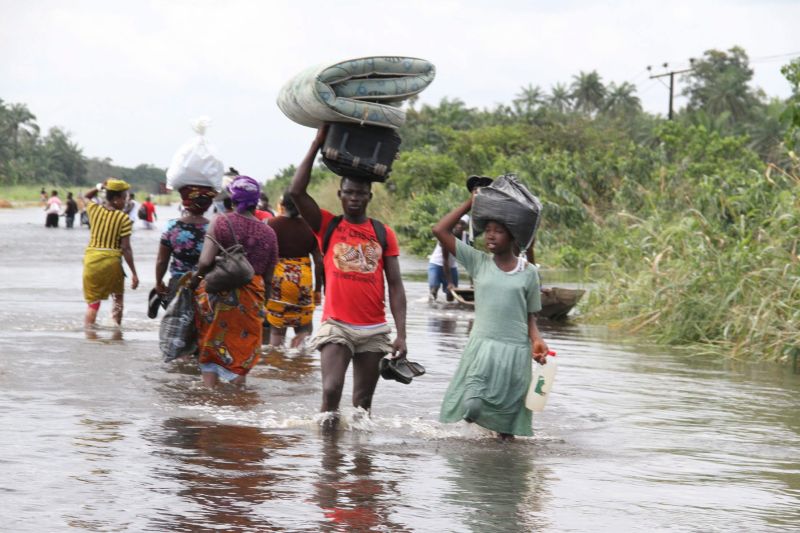 Esiril/picture-alliance/dpa Nigerians displaced by flooding in 2012.

According to Nigeria’s National Emergency Management Agency, the financial cost of the 2012 flooding amounted to 2.6 trillion naira (the equivalent of more than $ 5.8 billion) across the country. Housing and agriculture were the worst affected sectors. The crisis made people and communities suffer, and the huge financial loss highlights the scale of the natural disaster. The burden is so great that the affected communities will feel it for many years. They were unable to repair the damage fast because they simply did not have the money they needed.

In Africa, droughts, floods and cyclones have been wreaking havoc in communities across the continent. For example, a severe drought affected the whole of east Africa in 2011 and 2012. As a result, over 9.5 million people experienced harsh food shortages. The event triggered a refugee crisis. In February last year, storm Dino destroyed 20,000 homes in Mozambique.

Climate change means that extreme weather is occurring more frequently, so African nations are exposed to ever growing risks. The grim reality is that disasters are recurrent, so some people are likely to be traumatised again and again.

No doubt, Africa must prepare for climate change. The challenge is to build the resilience of vulnerable communities and deliver timely assistance when they need support. These issues are not trivial. Many people dismiss the capability of Africa to rise to this and other daunting challenges. They say leaders lack the political will and the competence for the kind of effective policymaking that might unlock the required resources.

That perception is overblown. Some progress is being made. In 2012, for example, policymakers came together under the aegis of the African Union (AU), and founded the Africa Risk Capacity (ARC). It is a specialised agency for financing climate resilience and crisis response. It consists of two arms, the AU Specialised Agency and the ARC Insurance Company. The ARC Agency focuses on building capacity within African member states for risk management and provides the necessary tools to support such work. This includes the provision of an early warning tool called Africa RiskView, which is linked to predefined contingency plans. The second arm of ARC, the Insurance Company, issues contracts to governments which serve to finance predefined contingency plans in the event of a disaster.

The ARC Insurance Company started out with a 20 year returnable no-interest loan of $ 200 million in risk capital from the governments of Germany and the United Kingdom. The ARC objective is to provide African countries with funds immediately when disasters strike. This kind of first-response assistance should reduce Africa’s dependency on humanitarian aid. It is an important component of disaster preparedness.

Africa RiskView does not only provide early warning. Its risk-modelling platform can be used to define parameters for disbursing insurance benefits. When satellite data indicates that a drought has occurred, the ARC thus pays at short notice. The process is automated, so the disaster response is timely.

The ARC has been operational for some time. No less than 33 countries have signed up to it. Nigeria is one. Not all, however, have joined the insurance scheme as paying clients.

The initial risk pool consisted of Kenya, Mauretania, Niger and Senegal. The scheme started in the rainfall seasons of 2014/15. The client countries paid insurance premiums worth $ 19 million, and the first set of insurance payouts was made in January 2015, totalling $ 26 million. The beneficiaries were Mauritania, Niger and Senegal because these countries were affected by drought.

However, the ARC can and will do more. The target is to insure 30 countries against drought, flood and cyclone disasters by 2020. This translates to up to $ 1.5 billion in coverage for some 150 million people. For this to happen, African governments must actively participate in the pool and pay premiums. The role of donors is also critical, not only in providing capital but in supporting premium financing for the fiscally most constrained countries.

It is important to understand that the ARC is actually a cost-reducing instrument. By making money available immediately, it reduces the costs of disasters. If a crisis is not responded to fast, the damages and costs keep growing. According to estimates, every dollar spent by the insurance right away saves nearly $ 4.5 dollars that would otherwise have to be spent later.

The ARC is an innovative and promising institution. The question arises whether it will perform well in the long term. Africa has a reputation of being a graveyard of good initiatives – and the reasons are lack of awareness, cynicism and governments’ inability to put their money where their mouth is. If they do not pay the premiums, their nations will not enjoy insurance coverage.

The continent least protected by insurances

Part of the challenge is that Africans are generally somewhat insurance-averse. This form of risk management actually requires a certain level of prosperity. It means to spend money on something one hopes one will not need. The point of an insurance policy is to be able to cope with an unlikely disaster that would be utterly devastating should it occur. Because more customers buy insurance than ultimately need it, the insurance company can cover the damages and make a profit nonetheless. Basically, an insurance scheme spreads the costs of damages over many households. Individual risks are thus managed in a collective way.

In African countries, only the upper and middle classes are prosperous enough to even consider investing in insurances they hope they will not need. This is the world’s least insurance-protected region. People’s prevailing attitude, therefore, does not support the ARC.

This challenge can be surmounted. Policymakers are able to understand the cost-benefit analysis. Such understanding could – and should – be reinforced by peer reviews in the context of NEPAD (New Partnership for Africa’s Development) with regard to protecting citizens from natural disasters. The process would also leverage local-level advocacy. It is important to raise awareness. Civil-society organisations should endorse the ARC because it serves to protect vulnerable communities. The point is to ensure that a natural disaster does not become a humanitarian one.

It must be acknowledged, nonetheless, that some governments will find it hard to pay the insurance premiums. Commodity prices are currently depressed, so the budgets of many commodity-exporting countries are strained. Governments are struggling to meet existing commitments. However, they must consider the sheer impact of natural disasters. Including insurance as part of their risk management strategy makes sense because it allows countries to cope with otherwise devastating events that would strain the public purse much more than comparatively small premiums do. The financial and humanitarian costs of natural disasters far outweigh the insurance expenditure. The smart priority is to set aside small sums to pay premiums in order to be able to deliver quick and effective assistance to people when needed.

African philanthropists should consider the ARC too. Donations to the ARC are welcome and can have huge impacts. In response to Nigeria’s 2012 flood crisis, the country’s billionaires were mobilised to contribute to meeting the humanitarian needs. Such an ad-hoc approach cannot deliver assistance fast enough however.

Strong private-sector businesses use insurance schemes to manage their risks. Accordingly, private-sector leaders should endorse the ARC mechanism as well. In the long term, an obligatory, legally coded system is stronger than mere charity.

There is ample scope for private-public partnerships in the ARC context. Every member government should set up a central office to coordinate resource mobilisation for ARC premiums. They should involve the private sector in this effort. This way, Africa can leverage the recent successes in private-sector development and reduce the dependence on foreign donors.

The ARC has a governance structure that represents its stakeholders. Signatories to the initiative make up the Conference of Parties, the agency’s main governance body. Ngozi Okonjo-Iweala chairs the governing board. She is Nigeria’s former finance minister and former top manager of the World Bank. Her international reputation is good.

The ARC is set to prove that a little external assistance combined with the resources of African governments and increased private-sector prosperity can deliver disaster relief and support recovery. Africa can become more resilient – and it must do so, given the outlook of growing climate risks.