Always returning to square one

Despite being a country with great potential, educated citizens and many natural resources, Argentina has a tendency to regularly slides into economic crisis.

contributed to D+C/E+Z in summer 2018 as a consulting professor of history at the University of Buenos Aires. 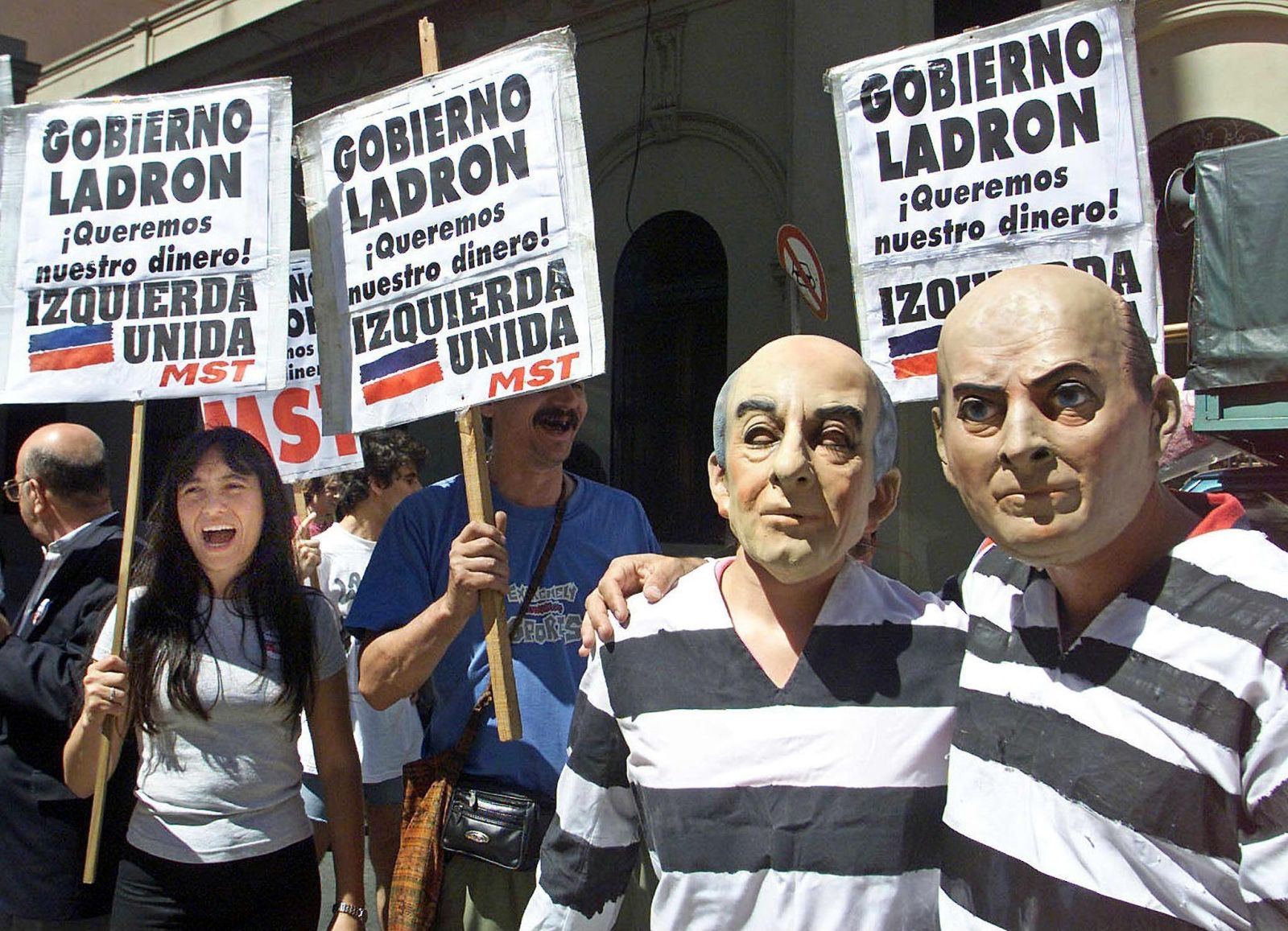 Garcia/picture-alliance/dpa In Buenos Aires in December 2001, protestors declared the government to be a thief and demanded their money – some of them were wearing masks with the face of then President Fernando de la Rúa.

For the past seven decades, Argentina has not developed in a continuous and healthy manner. The country has never tapped its potential, and is in a worse situation than it should. Political instability is a reason, even though Argentina has had a democratic system ever since 1983. This development failure is irritating and needs to be explained:

In this unbalanced scenario, foreign debt has been a fundamental component of Argentine economic structure. As is the case in other emerging countries, the roots of current problems can be found in the crisis of the 1970s, when the oil prices rose and Argentina was ruled by a brutal right-wing military junta. The dictatorship’s finances were opaque, and it borrowed heavily abroad. People’s standard of life declined, and the return to civilian rule in 1983 did not change that trend.

The decade of the 1990s marks a “before and after” in Argentina’s economic history. Those were the years when President Carlos Menem was in office. He was the leader of the “Peronistas”, a party that considers economic nationalism one of its main principles. Menem was first elected in 1989, at a time of hyperinflation. This extreme situation was the backdrop for radical cutting back of the public sector. Later, the Menem government opted for a fixed exchange rate, with one peso equalling one dollar. The measure was supposed to stop inflation, but the implication was that the peso had to be backed up by market-generated for-ex reserves.

Historically, Peronism had stood for government control of the economy and the nationalisation of major industries. Menem opted for the very opposite however. He opened the economy, got rid of regulations which had restricted foreign trade and dismantled state institutions, selling government-owned companies to private investors from Argentina and abroad. Menem and Domingo Cavallo, his minister for economic affairs, accepted the dogmas preached by international financial institutions at the time, drafting unprecedented strategies for their country. The IMF basically endorsed the policy, and funded it with several loans.

The market-radical approach seemed to work initially. Foreign capital flowed into the country because investors wanted to benefit from the privatisation drive. The economy recovered to some extent. However, some industries collapsed without state protection. Unemployment became a persistent problem.

Other problems soon became evident as well. Mexico’s financial crisis (the so-called “tequila” crisis) in 1994 had a contagious effect on other emerging markets which were believed to be running similar risks. Capital was fast withdrawn from Argentina too, so the country’s economy shrank by three percent in 1995. It recovered somewhat in the following years, but the situation was obviously instable. Inflation set in again. Due to the fixed exchange rate, the peso was soon overvalued, which further reduced the scope for exporting goods with high added value.

Problems escalated shortly after President Fernando de la Rúa was elected in 1999. His liberal alliance “Alianza para la Justicia, el Trabajo y la Educación” had defended the currency peg in the election campaign. Facing a decline of economic activity, a deep fiscal crisis and the growing flight of capital, the Alianza proved its incompetence by trying to maintain the convertibility at any cost. At one point, a government decree limited how much money people were allowed to withdraw from their bank accounts as the government tried to stem the outflow of capital. If people no longer have access to their money, a fixed exchange-rate becomes meaningless.

At that point, the International Monetary Fund (IMF) decided to withdraw its support. It had never been particularly keen on the currency peg, but it had appreciated economic policymaking in general. Lacking fresh money, the government had to declare default. Accordingly, the fixed exchange rate had to be abandoned, and people’s savings lost their value over night. The economy collapsed. Ever since, the IMF’s reputation in Argentina has been very bad. People remember that it had endorsed the market-radical approaches and that its withdrawal led to an economic melt down.

In the chaos of late 2001/early 2002, riots and looting rocked the country. The police killed at least 36 people. The established political forces were totally discredited an “Que se vayan todos” (may they all just go away) became the popular slogan. De la Rúa resigned, and three of his successors only lasted in office for a few days. The economy was in free fall. Soon it was almost a quarter smaller than in 1998. The share of urban people living below the poverty line went up to 57.5 %.

Eventually, the political situation stabilised under an interim president, Eduardo Duhalde. The economic situation improved slowly, from a very low bottom. It helped that the decline had been so steep that a total restart was needed. Having defaulted, moreover, the country was no longer bound by IMF conditionalities. The global economic environment suddenly became more favourable as agricultural commodities – especially soybeans – were in strong demand. For some years, Argentina actually had a positive trade balance.

President Nestor Kirchner, who was elected in 2003, took advantage of these trends. He was a Peronist of the statist tradition. He managed to negotiate a restructuring of most of Argentina’s foreign debt, according to which two thirds would be forgiven. However, the debt problem was not be solved conclusively because some private-sector investors made claims and a US court ruled in their favour. Nonetheless, Argentina no longer owed money to international financial institutions and foreign governments, so it could become a more or less normal member of the international community again.

Kirchner was succeeded in 2007 by his wife Cristina Fernández, who stayed in power until 2014 (Kirchner died in 2010). Manufacturing did not take off, and private-sector companies’ connections to government agencies became ever more important again. While the government increasingly became known for corruption, the lasting problems of Argentina’s commodity-driven economy remained unsolved.

Since 2015, President Mauricio Macri is in office. In the election campaign, he promised to liberalise and normalise the economy. International investors initially appreciated him, however, they lost patience with him earlier this year. The reason was that he did not want to proceed as fast as initially pledged. In view of a fast depreciating peso, Macri had to turn to the IMF for help, and the economy is now in recession. The underlying problem, however, is a change in the global macroeconomic setting. For years, the dollar had been cheep as interest rates in the USA were low. Accordingly, speculative money poured into emerging markets. The appreciation of the dollar and higher interest rates mean that private investors are now more likely to shy away from countries like Argentina.

The economy is in recession now, but things are not as terrible as they were in the winter of 2001/2002. The long shadow of that crisis is on people’s mind, of course. The mood is tense. Most do not expect the crisis to escalate as severely this time – but they did not expect that to happen back then either.


Jorge Saborido is a consulting professor of history at the University of Buenos Aires.
Photo: Garcia/picture-alliance/dpa

Correction, 6 September: the essay now states that, up to 2001, the IMF was not specifically interested in the fixed exchange rate, but endorsed the general thrust of Argentina's macroeconomic policy.