After the Fukushima disaster revealed how dangerous nuclear power is in an advanced economy, Germany’s Federal Government decided to phase out reactors. Governments of emerging markets still consider the technology an option for carbon-free energy security. However, India’s Coalition for Nuclear Disarmament and Peace, a civil-society network, does not see its government driven by environmental concerns, as Kumar Sundaram told the German environmentalists Anna Cavazzini and Jana Schönfeld.

last shared his views to D+C/E+Z in spring 2014 as a research consultant with the Coalition for Nuclear Disarmament and Peace (CNDP) in India. 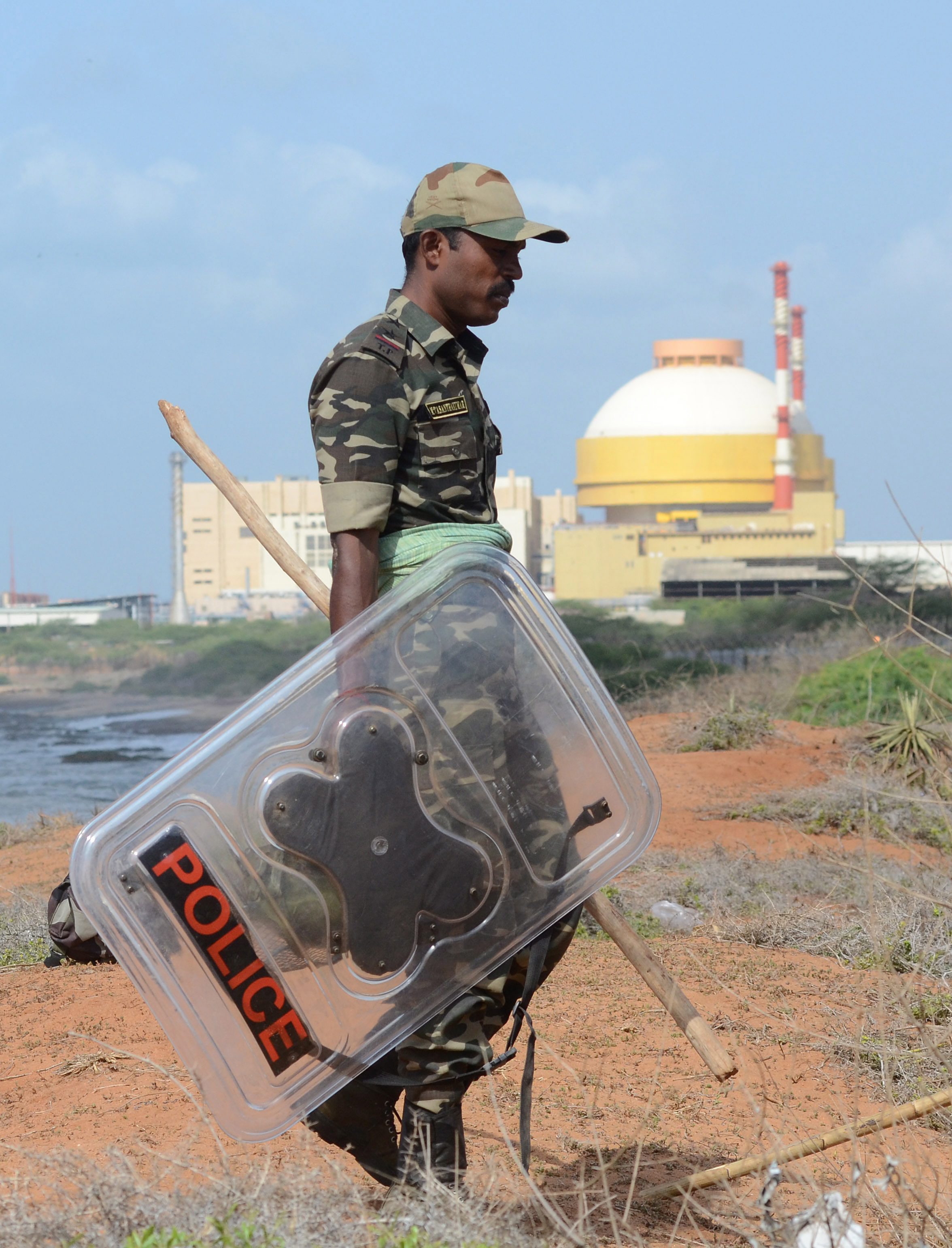 Nathan G./picture-alliance/dpa A policeman patrols the seashore near the Koodankulam nuclear plant in the south Indian State of Tamil Nadu.

What role does nuclear power play in Indian politics?

Nuclear power plays a very insignificant role in the energy mix of India, but it has acquired a disproportionate influence on public policy. It only accounts for about two percent of India’s installed power-generating capacity, but gets the lion’s share of the research and development budget. Nonetheless, it has a record of producing only 10 % of what was projected per decade. The poor track record of the Department of Atomic Energy (DAE) is evident in regard to contractual workers, suffering of inhabitants around its reactors, uranium mines and fuel-fabrication facility. After more than 40 years of operation, the DAE is yet to come up with an independent safety regulator.

Why is the nuclear establishment powerful?

Well, it is under government control. It enjoys a lavish budget, support of the mainstream press and political patronage at the highest level. Advancement in science, and particularly in supposed frontier technologies such as nuclear and space, have been embedded in the dream of the Indian nation since independence from Britain. The ruling elite always saw nuclear technology as a status symbol, so the nuclear establishment is hardly questioned in spite of its many problems concerning productivity, safety, transparency and accountability.

Are the reactors safe? Have there been any accidents?

India has seen a number of serious accidents and leaks. Perhaps the most serious one occurred in 1993 when the Narora plant faced a loss-of-coolant accident. In Kaiga, the reactor dome collapsed at an advanced stage of construction. Last year, there were major leaks of Tritium in Rawatbhata. But there is a shroud of secrecy, so one doesn’t get information about most accidents.

What is done with the radioactive waste which needs to be stored safely for millennia?

In India, there is complete silence on this question. The last we heard from the minister of environment and forests was that India doesn’t need to worry as the waste issue will become important only after 30 years! The media have reported about plans for building waste-storage facilities in the states of Rajasthan and Karnataka, but these announcements led to strong opposition from local people, and the government stated there were no plans. We assume that most nuclear waste is stored in the reactor compounds.

How do you assess plans to expand nuclear power generation 100fold until 2050?

That plan is anachronistic and ill-conceived. If you look at it, the entire plan is a post-facto concoction to justify the Indo–US nuclear deal that was struck in 2005. Before, the DAE had modest plans, but for diplomatic reasons, the Indian government changed policy. It promised to buy a large number of reactors from USA, France and Russia, and in exchange those countries would accept India’s nuclear weapons status as legitimate. Suddenly, nuclear power was said to be an issue of energy security. And because the expansion is conceived post-facto, you can see a pattern of dismantling and undermining of all democratic norms that stood in the way of implementation. Nuclear projects have been given farcical green clearances. There were attempts to exclude international players from liabilities. Government norms regarding reactor sites and safety measures were tampered with. People’s right to information is curtailed in regard to the nuclear sector. The government, again and again, has crushed down peaceful protests at the grassroots.

How are the civil and the military nuclear programmes related in India?

The Indian nuclear programme has always been opaque, and the civil and military programmes have always been inextricably linked. India used the material, technology and expertise it acquired under the "atoms for peace" rubric from the USA, Canada, UK and other countries in the 50s and 60s, and then conducted a "peaceful nuclear explosion" in 1974. This detonation proved that supposedly civil technology had military relevance. In response, the Nuclear Suppliers Group (NSG) evolved at the international level. Its goal is to prevent the proliferation of nuclear weapons. India’s production of nuclear energy is very small, and the entire programme was more geared towards producing nuclear weapons. Even reactor types were chosen with a view to producing plutonium for military purposes. The India–US agreement did call for the separation of civil and military facilities. But that hardly matters since India already has nuclear-weapons status. Today, the country gets uranium for civil reactors from the international market, which frees up domestic reserves for military purposes.

No, not at all. Nuclear facilities produce a mere two percent of our electricity. India is at an important threshold. The government should understand the realities of the post-Fukushima world, take into account the recent advances in green technologies and transcend the destructive models of centralised power generation and distribution through mega-grids. For India’s rural population and the poor, nuclear energy is of no use. Most of it will be used by big corporations and cities. For rural consumption, we need more decentralised power generation. The current model has never worked for the poor. India’s total power generation has more than doubled in the past 15 years, but the number of unelectrified villages is almost the same. A staggering 40 % of our villages must still do without electricity. We obviously need alter­native forms of production and distribution.

How strong is India’s anti-nuclear movement?

Well, it is heterogeneous and diverse. It includes people at the grassroots - farmers, fisherfolk and tribals who want to defend their livelihoods and land. Then there are experts who highlight the inherently unsafe nature of nuclear technology and its incompatibility with India’s real requirements. Then there are civil-society activists who may not oppose nuclear energy per se, but insist on transparency and accountability. They want to see democratic norms upheld, and yet others are concerned with human-rights violations and oppose the kind of repression anti-nuclear grassroots activists are exposed to. These different layers have been cooperating ever more consistently over time, but overall, in terms of organisations, resources and people active full-time, the movement is still quite small.

So its influence is not very strong?

We have had mixed experiences in terms of influence. The cause has attracted the attention and support of very prominent members of civil society and the intelligentsia. It was possible to bring the anti-nu­clear struggles of Koodankulam and Jaitapur to the notice of the mainstream media and the urban people. In terms of influencing policy, however, we have not achieved much. The Supreme Court allowed the commissioning of the Koodankulam-I reactor. That was a major setback. The government has shown no room for dialogue or reconsideration. In its eyes, the nuclear programme is a matter of international prestige and high diplomatic relevance.

Kumar Sundaram is a research consultant with the Coalition for Nuclear Disarmament and Peace (CNDP) in India.
pksundaram@gmail.com
http://cndpindia.org/