“Egyptians are entering an Orwellian world in which only the government is allowed to say what is happening.” This was the comment of Christophe Deloire, the secretary general of Reporters Without Borders, on Egypt’s new anti-terrorism law. 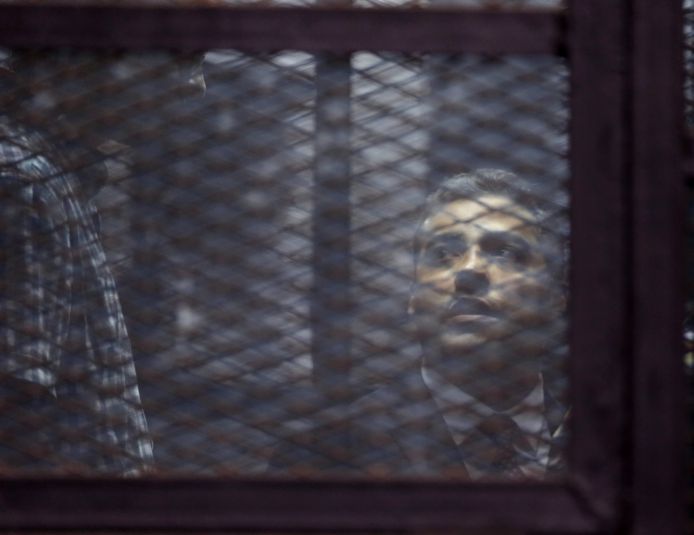 Nabil/AP Photo/picture-alliance Mohammed Fahmy is one of three Al Jazeera journalists who were sentence to three years in prison in late August.

According to the new law, journalists will have to pay 200,000 to 500,000 Egyptian pounds (€ 23,000 to 57,000) for disseminating “false” information that contradicts the official version of events. The law also punishes anyone who promotes “ideas” advocating terrorism with five years in prison. It was introduced after the assassination of Hisham Barakat, Egypt’s public prosecutor in June. At his funeral, President Abdel Fattah al-Sisi complained that “the prompt hand of justice” was unacceptably restricted by laws.

Soon after, there were violent attacks by militants on security forces in the Sinai Peninsula. According to the military, 17 soldiers were killed. However, international and local media outlets quoted medical staff who said more than 60 soldiers had died. A series of attacks in Sinai have shocked the public, raising doubts about al-Sisi’s capability  to fight terrorism. The regime resents such coverage.

The government has a history of putting pressure on Egyptian and international media, and it is increasing that pressure. The Foreign Ministry has issued instructions to foreign reporters, listing terms they should and should not use. It objects to expressions like “jihadists” or “fundamentalists” and wants journalists to write “slaughterers” and “assassins” instead. With support from iMediaEthics, a New York-based non-profit organisation, the governmental State Information Service (SIS) instructed foreign journalists to make their reports match those of the Defence Ministry.

Reporters Without Borders compile an annual World Press Freedom Index. In 2015, Egypt ranked 158 out of 180 countries, and that was before the new law was passed. Since the beginning of 2014, at least 30 journalists have been arbitrarily arrested on charges of supporting a “terrorist organisation”, which is how the government calls the Muslim Brotherhood.

According to the Committee to Protect Journalists (CPJ), an international organisation, 18 journalists were behind bars at the beginning of June 2015, and the charges against them were based on their reporting. Since the CPJ began reporting in 1990, the number of imprisoned media workers has never been this high in Egypt. The CPJ adds that the arrest of local journalists is usually violent and entails beating, abuse, raids of their homes and confiscation of property. It is certainly no coincidence that the law absolves members of the security forces from prosecution if they use force the government considers to be “necessary and proportionate”.

Foreign correspondents are also subject to repression. A case in point is the detention and questioning of Alain Gresh, the editor-in-chief of Le Monde Diplomatique, in downtown Cairo after a woman reportedly overheard him discussing politics in a café. Ricard Gonzalez, the Cairo correspondent of the Spanish newspaper El Pais fled the country after Spanish authorities warned him that he would be arrested. Most recently, three Al-Jazeera journalists were sentenced to three years in prison on charges of aiding the banned Muslim Brotherhood.

After passing the anti-terrorism law, the government suspended the circulation of three privately owned Egyptian newspapers. The reason was that they published content that was critical of President al-Sisi.

The new anti-terrorism law has been widely criticised by several international and local human-rights organisations. Human Rights Watch, for instance, argues that it erodes “basic rights”. The government denies that the new law is meant to curtail press freedom, but its impact is precisely that.

Ingy Salama is an Egyptian journalist and media specialist. She is based in Germany.
ingysalama@hotmail.com