Kiran Klaus Patel is a historian who does an excellent job of deconstructing EU mythology. He shows that, while there is a grain of truth to the ideas of the EU being a peace builder, a driver of prosperity and a potential world power, there never was a master plan to make that happen. Instead, its history often evolved in incremental steps in response to various crises. 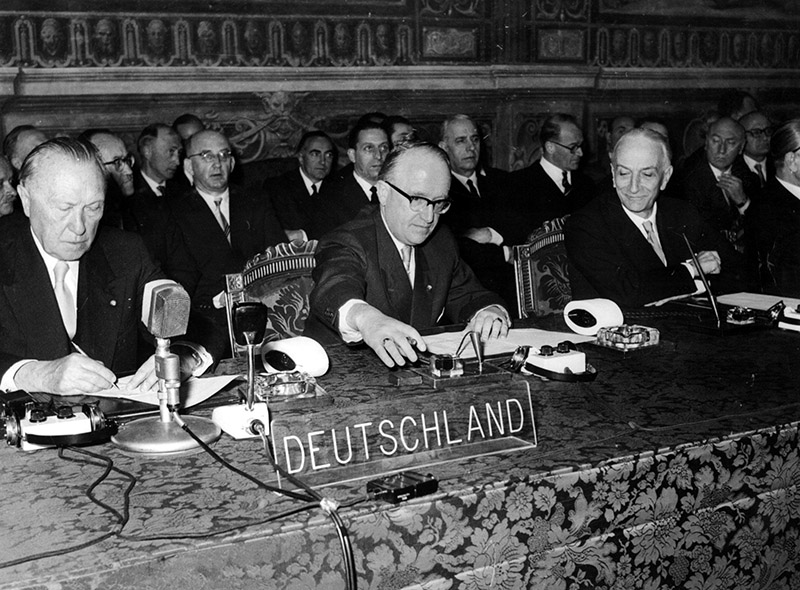 picture-alliance/dpa The German delegation, led by Chancellor Konrad Adenauer (left), attending the conference in Rome in 1957 that concluded several agreements, including on the common market and Euratom.

Patel is a professor at the University of Maastricht. His book “Projekt Europa” was published in German by C.H. Beck last year. Cambridge University Press is preparing an English translation that is scheduled to appear in April 2020.

Let’s take a brief look at the three myths Patel deconstructs. As he shows, the EU did serve a peace-building function, but it did not play an important role in reconciling the war-torn continent immediately after 1945. At the time, many different international organisations were established to promote peace. The first precursor of what is now the EU, the European Community for Coal and Steel, was only started a decade later, and it had a mere six members: West Germany, France, Italy, Belgium, the Netherlands and Luxembourg. The same countries started two other communities in 1957, pooling their policymaking on nuclear technology (Euratom) and establishing a common market (European Economic Community). Only by the end of the 1950s, were the three communities merged, and Euratom was long believed to be the most important component. In the 1990, the European Community become the EU.

In regard to peacebuilding, the community was actually somewhat ambivalent in its early years, according to Patel. On the upside, it reinforced trust and cooperation among its members, tying them closer together and turning Germany and France, the former enemies, into close allies. On the downside, the Soviet Union and its allies considered it a reinforcement of the western block. In the early 1980s, by contrast, the EU insisted on maintaining trade relations with the Soviet block and thus mitigated to some extent Washington’s re-escalation of the Cold War.

In Patel’s eyes, the EU only really became a major peacemaker in the 1990s after the collapse of the Soviet Union by offering perspectives to Eastern European countries. EU enlargement proved very important in ensuring peaceful transitions.

In regard to economic affairs, Patel does not deny that the European Community was always useful, but he argues convincingly that it was not a driver of growth in the early years. In his assessment, economies were expanding fast due to opportunities provided by post-war reconstruction and the introduction of new technologies. National governments, however, used the European Community to manage difficult transitions. For example, joint agricultural subsidies cushioned off rural change, slowing down the pace at which smallholder farming was becoming unviable. In a similar sense, inner-community migration, especially from southern Italy to industrialised cities in northern member countries, reduced social tensions and helped employers cope with labour-market bottlenecks.

As for making the EU a world power, Patel not only elaborates how this aspiration was always tampered by pragmatism, but also shows that the USA was generally supportive of its allies’ regional integration for geostrategic reasons. Washington may sometimes have found “Brussels” to be a difficult partner during the Cold War, but its stabilising impact on Western Europe was most valuable. Donald Trump is the first US president to speak of the EU with open resentment.

Over time, the EU became a powerful player in trade affairs with an increasing influence in other policy fields. In regard to official development assistance (ODA), for example, it has long been making a difference. A large share of member countries’ funding is channelled through the EU. While they still pursue international-development policies of their own, their joint funding makes the EU an additional force to be reckoned with. As Patel notes, moreover, the EU contributed a lot to changing the rhetoric from one of colonial dominance in the 1950s to eye-level partnership by the turn of the millennium. Rhetoric has a bearing on policymaking even if the latter typically does not fulfil every promise.

In some policy fields, however, the EU is still basically a non-entity. The most striking example is military affairs. NATO is quite obviously much more important. What Patel fails to point out, however, is that EU members’ position within NATO is certainly strengthened because their leaders are familiar with one another, are used to coordinating action among one another and are more likely to consider joint interests rather than narrowly focused national interests as in the past.

What made the EU strong

It is important to understand, of course, why a six-member community of West European countries evolved into the dominant supranational organisation in Europe, becoming a global model for regional integration. According to Patel, the EU and its precursors differed from other international organisations in several important ways:

For these reasons, the late-comer among international organisations increasingly overshadowed competitors. The European Free Trade Organisation, in particular, proved a less coherent and weaker initiative, so Britain, Ireland and Denmark switched sides in the early 1970s. Since then, ever more countries have joined the EU. In spite of many crises and the British referendum decision to leave, it has proven surprisingly resilient.

Patel’s book explains why. It elaborates how the EC started in the 1950s and grew into the EU by the mid-1990s. It does not discuss more recent crises. Brexit, refugees and sovereign debt do not figure. Nonetheless, the author’s insights help to understand what the EU is today, and why it has proven so resilient. The most important point is that it serves members’ interests. Another is that its institutional setup and decisionmaking processes are flexible enough to rise to challenges. Indeed, Patel shows, that the EU’s history is best understood as a series of successful responses to crises rather than as the implementation of a rigid master plan.

The EU is a complex and multi-layered supranational organisation in which national governments still play decisive roles. It makes many things easier for them. Patel expresses the evidence-based hope that the EU is not about to disintegrate, but more likely to evolve into an even more important supranational organisation. As in the past, he expects such a development to be marked by fuzzy compromises and sudden innovations rather than to be guided by strict principles.