last contributed to D+C/E+Z in autumn 2015 working for the non-governmental IBON International Foundation in the Philippines. 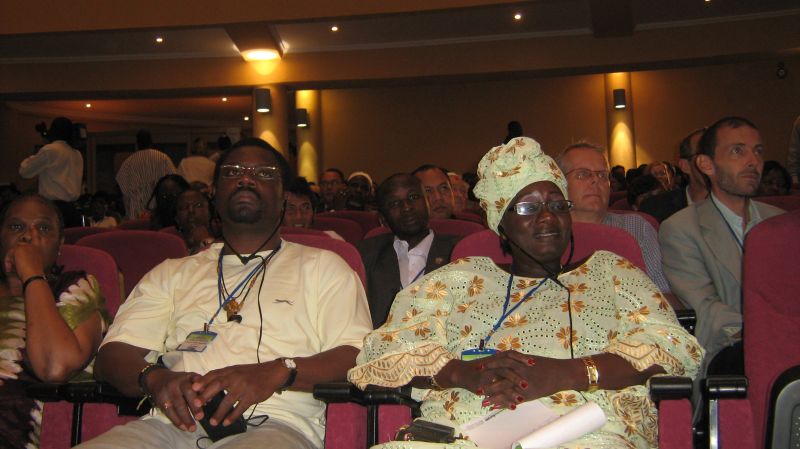 dem Participants in NGO meeting ahead of the High-Level Forum on Aid Effectiveness in Accra in 2008.

The UN recognises the critical role that civil-society organisations (CSOs) play in international decision-making. However, it still faces the big challenge of giving appropriate space to voices from the developing world. An even more challenging issue is to give that space to the poor and marginalised who make up the majority of people in the countries concerned.

Striving for more equality, the UN wanted to involve more people than previously in the post-2015 process to define an agenda to follow up on the Millennium Development Goals. Relying on online technologies, it did make some progress. In developing countries, however, fewer people have access to the internet.

It matters even more that online engagement cannot replace immediate involvement in decision-making. Digitised communication is no substitute for strategically planned and sustained eye-level interaction at consecutive international meetings. CSOs have been able to engage in UN processes such as the General Assembly, ECOSOC or the UNEP in this way. CSOs have also been made members in international multi-stakeholder forums such as the UN Development Cooperation Forum or even the Committee for Food Security of the FAO (UN Food and Agriculture Organization).

The snag, however, is that voices from the global south remain marginalised nonetheless. The reason is that northern-based international non-governmental organisations (INGOs) have a hegemonic stranglehold on CSO involvement in international affairs. Well-known, truly global INGOs like OXFAM, CARE or Save the Children are only the tips of the iceberg. Many other, less prominent INGOs are relevant too.

Typically, they are based in the various countries that belong to the OECD (Organisation for Economic Cooperation and Development), in which the donor countries are united. They normally have close links to their national governments. They get framework funding, for instance, or serve as subcontractors for development programmes and humanitarian aid in the global south. At the same time, they finance some of their international activities with fund-raising campaigns and philanthropy.

Advocacy is an important component of their work. INGOs are heard by their respective national governments, and they have access to the UN, the European Commission and other international bodies. These ties make them influential, but they also help to acquire additional funding. To a considerable extent, INGOs depend on the governments and organisations they liaise with.

CSOs from the global south can only dream of having such immediate access to the most powerful players in the international arena. Moreover, there are only very few truly Southern INGOs. They did not emerge thanks to donor support, but managed to create an independent niche in international affairs. The Third World Network, IBON, CUTS, and Focus on the global south which operate at the global level, are examples. Specialised organisations such as BRAC and Grameen, both of which focus on micro finance, also operate globally. Regional CSO networks are more common.

It is important to bear in mind, however, that INGOs have interests of their own. To keep their operations going, the mobilisation of funds is crucial. INGOs typically have strong management know-how to motivate individual donors and volunteers, are capable of running development projects and humanitarian relief and are well versed in advocacy.

To some extent, international federations of mass-membership organisations such as trade unions, farmers’ unions or women’s associations provide a counter-balance to INGO dominance. However, these international federations again tend to be dominated by their rich-world constituents. Moreover, there is a tendency of strong secretariats taking over and pursuing their own agendas.

The post-2015 process was very illustrative. Government-funded INGOs from OECD nations banded together and promoted their agenda with hardly any concern for critical NGOs or mass-membership organisations from the global south. The choice of slogan was indicative in this context. Activists from the global south demanded “social justice” and the reduction of inequality, whereas INGOs from the OECD emphasised “poverty eradication”. CSOs from developing countries had an alternative vision and expressed different concerns. Unfortunately, but unsurprisingly in view of their donor support, the INGOs prevailed.

INGO dominance does not mean, of course, that CSOs in the global south are merely INGO puppets. What it means is that they do not get the attention and respect they deserve.

A particularly irritating episode occurred a few years ago. Asian CSOs and rural associations were suddenly criticised for being beholden to “INGO imperialism” because they campaigned against genetically-modified organisms. This accusation was nonsense. The Asian civil-society activists’ autonomous position was based on bitter experience with pesticides and fertilisers. Nonetheless, a consultancy in Australia managed to use the common knowledge of INGO influence to discredit them – with considerable impact.

In any case, the systemic predominance of INGOs perpetuates the status quo in the global arena. It actually strengthens it. By and large, the OECD countries dominate international discourse and decision making. INGOs supplant the voices and role of the poor in international affairs in various ways. At the root of this power is their funding for southern CSO partners. Ultimately, INGOs thrive on OECD governments aid policies.

The point is that, however well meaning INGO managers may be, their influence is a systemic element of the multilateral system. A few INGOs, especially the particularly prominent ones like Action Aid, try to buck the system and act provocatively. However, even if Action Aid has nationalised its branches, they are still not genuine voices of the marginalised speaking from the global south, and they too are defending their own specific positions of influence.

Many INGO leaders are uncomfortable with this setting, and they even express criticism. They increasingly understand that they must give account not only to the public of their home countries, but to other constituencies as well, especially the poor in the developing countries and the CSO they partner with. Spelling out this challenge, however, is easier than rising to it. INGOs can operate without doing so, but they will collapse if they lose the faith of the people in their home countries. The attempts to reform CSO engagement in international affairs made so far have been worthy, but much more needs to happen.