Advocating for the private sector

Liberia has a great, but largely untapped potential for economic development. The long civil war of the 1980s and 1990s severely disrupted the once thriving economy. Recovery after the 2003 peace agreement was again halted by the Ebola outbreak in 2014. A recent business survey shows what problems the government should tackle to improve the investment climate and help the private sector to create more jobs.

contributed to D+C/E+Z in winter of 2019/2020 as secretary general of the Liberia Chamber of Commerce.

last contributed to D+C/E+Z in winter of 2019/2020 as head of the Department for International Projects and Partnerships at the Hamburg Chamber of Commerce. 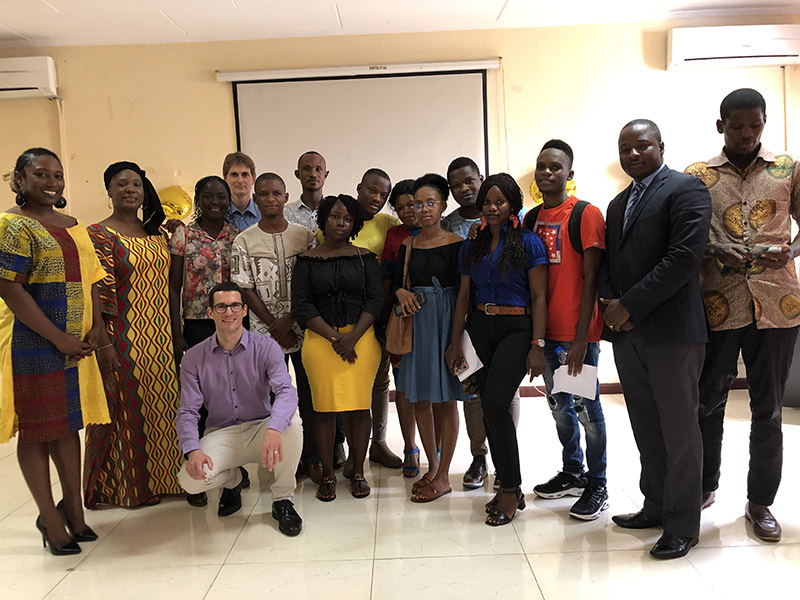 LCC The survey team in Monrovia with our co-authors (SalaMartu Stephanie Duncan left and Michael Konow kneeling in front) plus another supporter from Hamburg, Torsten König.

The survey was carried out among 126 companies in Monrovia in December 2019. They belonged to different sectors. Half of them rated the current economic situation as bad. Only nine percent considered it good. Negative factors included:
the high cost of – and unreliable access to – electric power, safe drinking water and fuel,

For businesses to grow and hire more people, these things must improve. Many companies currently rely on diesel generators, and piped-water services are yet to be fully restored.

There were also complaints about government agencies. They related to taxes, lack of coordination among different agencies as well as difficulties in obtaining or renewing licenses, permits and registrations.

Liberia was once called the “Pepper Coast” because of the wide availability of malagueta pepper. The country exports rubber, timber, iron ore, gold, diamonds and oil. But even though the economy is based on commodity exports, foreign-trade regulations are not clear in this sector. Business leaders complain that they:

There is good news too. For this year, 43 % of respondents expected things to improve for their business, though 31 % expected the situation to worsen. A sense of hope was evident. Many interviewees said that their companies needed the government to set an appropriate framework. The list of complaints indicated defines priorities for Liberia’s government.

The result of the survey was presented to the business community at a meeting at the Liberia Chamber of Commerce. Business leaders welcomed the publication of the business condition report. Media coverage was good. However, one manager was disappointed because the government did not send anyone to the report launch.

Torsten König, head of statistics at Hamburg Chamber of Commerce, supported LCC in setting up the new investment-climate assessment. He says it is essential to “ask the right questions, collect and collate data accurately and draw relevant conclusions” (see article by Michael Konow in Tribune section of D+C/E+Z e-Paper 2018/05). In his eyes, business-condition surveys are the most powerful tool a chamber has at its disposal. König emphasises that the ultimate purpose is to advise the government.

Business membership organisations (BMO) such as LCC play a key role in monitoring government action. They speak out for the business community. A majority of three-quarters of respondents said they wanted a BMO to advocate on their behalf. The LLC thus has a very strong mandate. It was established in 1951 and today represents over 350 companies and business associations, including multinational companies such as Firestone. The LCC also represents Liberia’s employers in tripartite arrangements with the government and trade unions.

SalaMartu Stephanie Duncan is secretary general of the Liberia Chamber of Commerce.
salamartu@gmail.com

Michael Konow heads the Department for International Projects and Partnerships at the Hamburg Chamber of Commerce.
michael.konow@hk24.de