Local people help manage nature reserves in Brazil. This contribution was produced in cooperation with KfW. 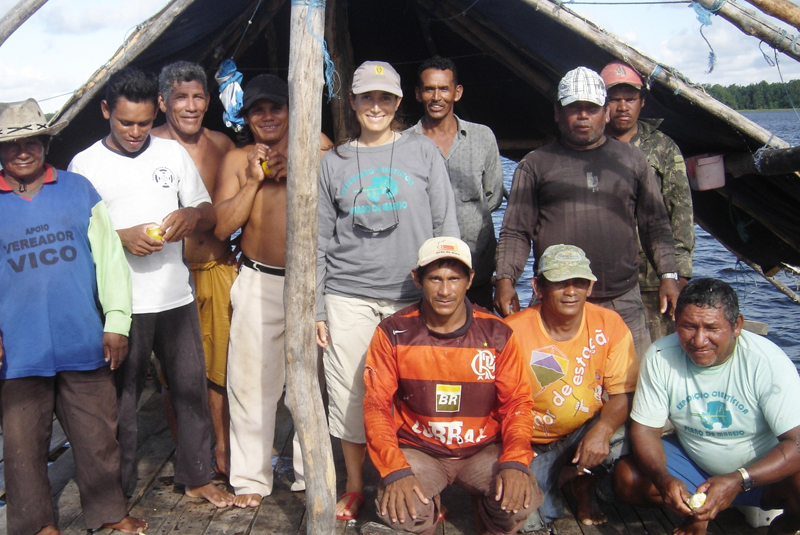 Patricia Pinha steers a small motor boat on a wide river past thick mangrove forests. The 36-year-old woman is the park director of Lake Piratuba Biological Reserve, located just a few kilometres north of the mouth of the Amazon River. She is travelling to attend the Reserve’s Council, which is meeting today. These gatherings allow her to discuss the proper use of land and water with the representatives of local people. The council also debates when the seasons for hunting or fishing should close. The committed conservationist is convinced that the rainforest will only be effectively protected if the local people are involved.

That stance could not be taken for granted in the region. When the Bra­zilian government declared the Piratuba area a nature reserve more than 30 years ago, no one took into account residents’ interests. However, there are 12 small settlements in and around the Reserve. Fish in Lake Piratuba is their livelihood. The lake is home to the pirarucu, the largest freshwater fish in the world.

"The creation of the reserve put the local people in a difficult position," Pinha says. The new regulations curtailed their way of life, Pinha argues, but the military government at that time was not interested in dialogue. "For over 20 years, the villagers’ relations with the park authorities were marked by repression," the conservationist adds. Neither side understood the other’s point of view. At the same time, more and more people tried to make a living from fishing.

Increased, unregulated fishing led to lower yields and reduced biodiversity. In the early 1990s, fishing families sold around 80,000 crabs a year. By the time Pinha assumed her post eight years ago, that number had fallen to just 10,000 a year. The environment was at risk, and so was the local people’s livelihood. "We had the same concerns," Pinha recalls. "But it took us a long time to approach each other."

With financial support from Germany, Patricia Pinha ultimately established the Reserve Council. The idea was to replace repression with local participation, and it was well received. Over 170 people took part in the first meeting at the Piratuba Reserve. Today, the Council has 32 members and meets regularly.

Pinha managed to negotiate an agreement with one fishing village regarding the reserve’s fishing grounds. It was the first agreement of its kind in Brazil. People used to fish more or less illegally, but now there are clear rules for fishing and a new relationship of trust with the authorities. "Not only do we have fewer conflicts now," Pinha reports proudly, "but the local people are even actively contributing to environmental protection."

Many nature reserves across Amazonia have copied this successful model. Fifteen other reserve councils now meet regularly. ARPA (Áreas Protegidas da Amazônia – Protected Areas of Amazonia) is a programme that provides aid to Amazonian reserves. Its goal is to permanently protect 60 million hectares of tropical forest, also with the aid of local people. The programmes’ international donors, on the other hand, include the World Bank, the World Wide Fund for Nature (WWF) and the German government. So far, Germany has invested € 61.3 million in ARPA through KfW.

A million species at risk