Moscow tries to counter western interests wherever it can

French efforts to stabilise Mali have failed dramatically. An assertive military regime has taken power there, and coups are shaking other West African countries. Vladimir Anti-Danso of the Ghana Armed Forces Command & Staff College told D+C/E+Z in an interview what global trends are driving the crisis.

last contributed to D+C/E+Z in spring of 2022 as dean and director of academic affairs at the Ghana Armed Forces Command & Staff College (GAFCSC) in Accra. 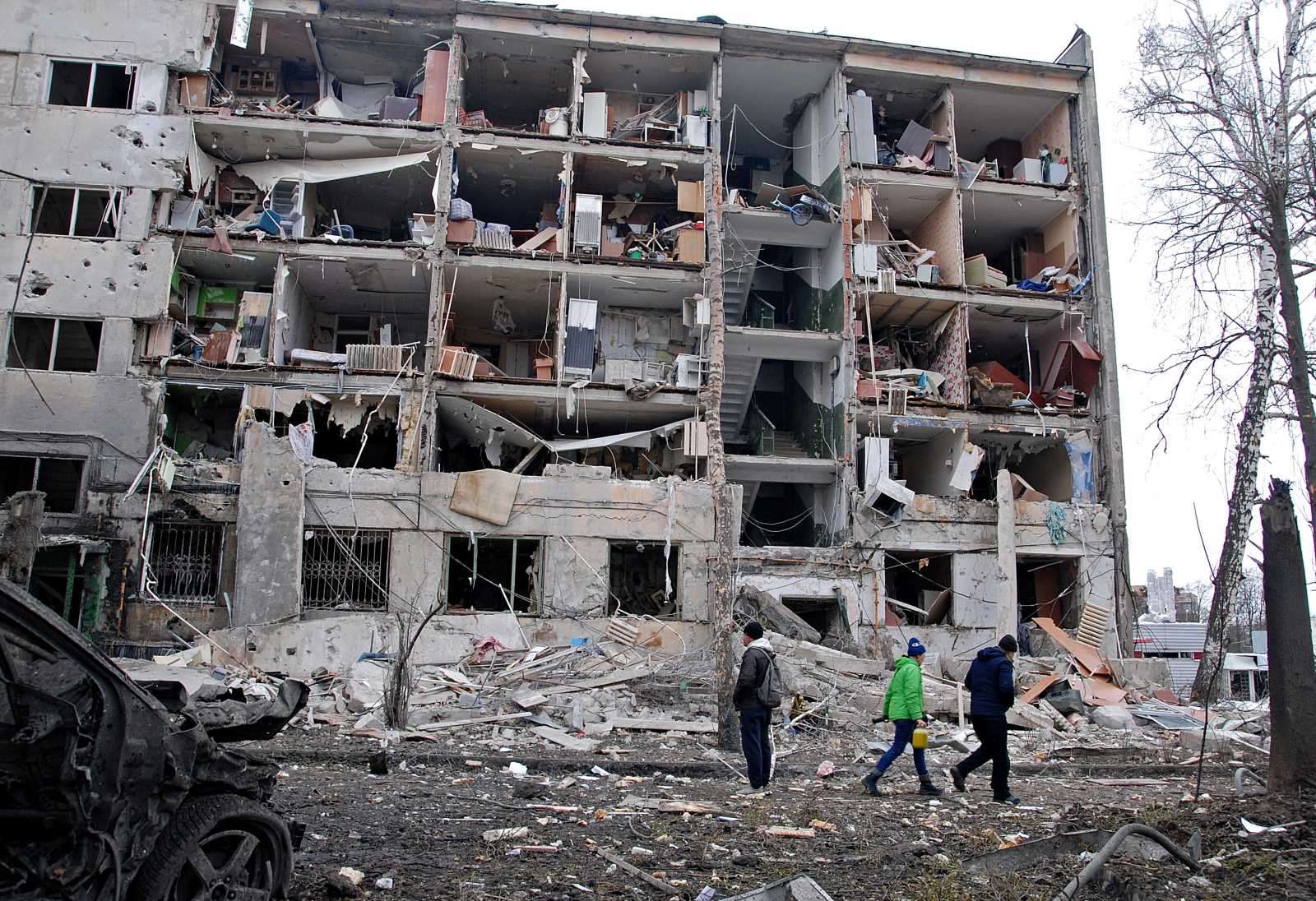 We made this telephone appointment to discuss the security situation in West Africa, but in view of Russia’s invasion of Ukraine, I’d like to start with something else. A nuclear-armed former superpower is attacking a sovereign neighbour without any pretence of acting in pursuit of the public good or respecting the multilateral order. I am surprised that some are now criticising global media of being Eurocentric because they pay so much attention to this war. Do you, as an African intellectual, not think that this attention is merited?
Yes, I certainly think that this war deserves global attention. However, it is striking that international media never expressed this kind of anger and outrage when western-led military interventions attacked sovereign nations. Coverage of the wars in Kosovo, Afghanistan, Iraq and Libya was far more understanding of what western governments were doing. It is noteworthy, moreover, that some western reporters have indeed made racist comments, for example when they emphasised that Ukrainian refugees look European and are Christians.

Yes, I agree, those statements are unacceptable. As for the wars you just mentioned, I would however argue that the context was quite different. The wars were controversial, but in each and every case, a broad international coalition opted to fight. There was also some kind of mandate from the UN Security Council, though it was sometimes given retroactively, and US President George W. Bush’s claim to be enforcing a UN mandate with his invasion of Iraq was dubious from the start. This time, however, the aggressor is acting in a sense of nationalistic self-empowerment and there is no chance at all of Russia ever getting a UN mandate.
I’m not going to defend Russia’s attack on Ukraine in any way. It is atrocious. Full stop. But let me insist that there were two serious problems with the UN mandates you just mentioned. First of all, going to war before getting the mandate considerably undermined the authority of the UN Security Council each and every time. According to international law, it has the monopoly on deciding about  legitimate warfare. Second, mission creep meant that military operations fast served goals that were not spelled out in the UN mandate. In Iraq, the search for weapons of mass destruction was fast replaced by regime change. In Libya, the imposition of the no-fly zone was managed in a way that equally led to regime change. The interventions in both Iraq and Libya had detrimental impacts on our world region, which Western observers tend to neglect. In particular, jihadism became much stronger. On the one hand, frustrated young men began to identify with Muslim victims. On the other, arms from Libya suddenly became abundantly available.

Jihadism is one of the main issues in the multidimensional crisis the Sahel region is facing. As far as I know, the others are global heating which is destroying rural livelihoods, fast population growth and drugs trafficking (see Mabingué Ngom on www.dandc.eu), and coronavirus has compounded problems. Is that correct?
Well, arms trafficking matters too, and I think it must be emphasised that all the multiple problems are reinforcing jihadism. People are desperate and, to some, violent extremism looks attractive. In a vicious cycle, they then further destabilise our countries.

How do the military coups in Guinea, Mali and Burkina Faso fit into the picture?
The important thing to understand is that they differ from the kind of military coups we saw in the past. West Africa is now witnessing systemic coups. The leaders notice that statehood is failing and step in to prevent the worst. In the past, we had conspirative coups, with some officers grabbing power and then exploiting their country as they pleased. The coup leaders today may actually be quite serious about wanting to return to democracy in the not so distant future, but they feel they need to get a grip on things first. It is promising that the regime in Burkina recently appointed a civilian prime minister.

What went wrong with the French mission in Mali? It went on for many years and was meant to stabilise the country.
The French leadership made three fundamental mistakes:

This scenario sounds a lot like what happened in Afghanistan (see Paul D. Miller on www.dandc.eu).
Yes, it does – and for an obvious reason. The fundamental mistakes are similar. Compounding the problems, people in all Francophone countries in our region see their former colonial master pretty much in the same light. Paris is arrogant, has all too often sided with corrupt leaders and does not enjoy people’s trust. At the same time, France was clearly the leader in all international military support efforts, so its bad reputation affects UN and EU engagement as well.

Does that mean that democracy is at risk across West Africa?
I think you need a more nuanced perspective. Ballots don’t stop bullets. To a large extent, what western countries have been supporting, was democracy as an event. Elections are held, a  government takes office, but the problems go on. What we need is procedural democracy that actually solves problems. As long as our political systems basically remain event oriented, they will always be weak. Western governments have been paying more attention to the ceremonies of democracy than to the substance of good governance. Elections can be bought – and they often are. Solving a nation’s problems is a much greater challenge.

ECOWAS – the Economic Community of West African States – supports democracy in principle and has imposed sanctions on the military regime in Mali (see Karim Okanla on www.dandc.eu). Will that make a difference?
No, not really, and the reason is that the ECOWAS protocols are not up to purpose. For example, they do not take into concern that Mali belongs to the West African Monetary Union of Francophone countries. They all use the CFA Franc. The sanctions cut across different sectors and affect many countries, but they do not help to tackle the dramatic and multidimensional crisis which is giving rise to systemic coups. We have signs that Niger is probably at risk too. The ECOWAS protocols are only designed to tackle kleptocratic autocrats of the kind that caused the civil wars in Liberia and Sierra Leone at the end of the 20th century.

How do you assess Russian interests and involvement in Africa?
Well, Moscow basically wants to counter western interests wherever it can. Where Russia’s government sees weakness, it tries to step in. They don’t care about rules and don’t have high expectations regarding what African governments can – or should – do. Copying the US example of Blackwater, the company now called Academi, the Kremlin created the Wagner Group, a private-sector entity that provides military services. Its mercenaries are prepared to do dirty work, and their operations are more deadly than those of French soldiers. On the other hand, the Russians want to be paid and have shown keen interest in African goldmines.

What kind of multilateral support does West Africa need?
We are feeling the impact of global trends – jihadist violence, the climate crisis, drugs and arms smuggling. We have not caused them and cannot be expected to get a grip on them on our own. Conventional ODA (official development assistance) will not do so either. To a large extent, our low  and lower-middle-income countries are being left to ourselves as we are struggling with global challenges.

Vladimir Antwi-Danso is the dean and director of academic affairs at the Ghana Armed Forces Command & Staff College (GAFCSC) in Accra.
vladanso@yahoo.com