Peace must be top priority

In elections in June, the AK Party lost its absolute majority in the Turkish parliament – and President Erdogan lost his grip on unrestrained power. His critics consider him one of the fomenters of the violent chaos now plaguing the country. 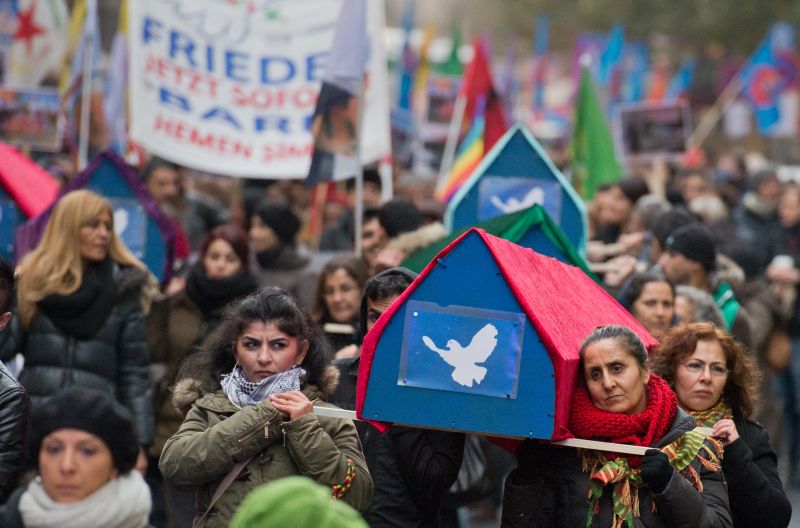 Rössler/picture-alliance/dpa Kurds rallying in favour of the peace process in Frankfurt earlier this year.

“This would not have happened, had one single party won 400 seats in parliament.” This is what President Recep Tayyip Erdogan revealingly said in a TV interview a few weeks ago. What he meant was that an absolute AKP majority would have enabled him to transform Turkey’s political system into a presidential system with a powerful head of state at the top. His statement indicated that he wants absolute power for himself, and he seems to be willing to do anything to get it.

For three months now, Turkey has been suffering an new wave of violence. In July, a suicide bomber who was close to the terrorist ISIS militia, wreaked havoc in Suruç. Terrorists of the illegal Kurdish militia PKK have once more begun to attack soldiers and police officers, and the military is retaliating in kind. Almost 200 people have been killed in recent weeks.

The saddest event, so far, was the atrocious attack on a peace rally in Ankara on 10 October. Almost 100 people died. Who is to blame? In the eyes of Erdogan and his faith-based, conservative AK Party, the culprits are terrorists of the PKK, Islamist extremists of the ISIS kind or the clandestine leftist organisation DHKP-C – plus, of course, the pro-Kurdish Party of the Peoples (HDP), which has close links to the PKK, but opposes violent means.

Even before the June election, Erdogan, the AKP and supportive media tried to equate the HDP with the PKK in the hope of preventing it from getting enough votes to win seats in parliament. They didn’t convince the voters, however, and several legislators now belong to the HDP. As a result, the AKP no longer commands an absolute majority and thus cannot change the constitution the way Erdogan wants. Coalition talks between the AKP and the Kemalist CHP ensued, but they were farcical. As was to be feared, Erdogan did not give Prime Minister Ahmet Davutoglu the go ahead for such an alliance. Another election is now scheduled for 1 November.

Soon after the AKP’s election defeat, a Fuat Avni, a mysterious whistle-blower, warned via Twitter that Erdogan was preparing a strategy of chaos to achieve his ultimate goal of establishing a presidential system. According to Avni, Erdogan told Hakan Fidan, a close ally who heads Turkey’s secret service MIT, to reactivate his contacts within the PKK. In any case, it did not take much to undermine the fragile and cumbersome peace process that Erdogan himself had started some years ago.

It is becoming crystal clear that, from the AKP perspective, the peace process was only meant to mobilise Kurdish votes for Erdogan. This was the AKP’s core incentive and it has apparently become obsolete because many Kurds voted for the HDP in June. Erdogan’s team rules according to the slogan: If you aren’t with us, you are against us. This zero-sum idea of politics is a disaster. It has polarised Turkish politics for years.

Erdogan is driven by the idea to become the greatest leader of all times, greater even than Mustafa Kemal Atatürk, who founded the republic. At the same time, he is terrified of losing power and having to face the courts for his shenanigans, should his opponents form the government.

Distrust is growing among the people. They remember the year of violence in the 1990s, when ten thousands died in a PKK insurgency. All opinion polls so far indicate that the election results in November will not be different from the ones in June. Angry anti-HDP propaganda has failed to make a dent. Apart from an absolute AKP majority, the greatest danger for Turkey would be a coalition of the AKP with the ultra-nationalist MHP, since this party is sure to further fan the flames of anti-Kurdish sentiments. The only way to restore peace to this troubled country is a coalition of the AKP with the CHP. Politicians must make peace their top priority – rather than trying to win 400 seats in parliament.

Timur Tinç is a freelance journalist based in Frankfurt.
timurtinc@web.de