Though Zambia has made impressive economic progress, more than 60 % of its 16 million population remains poor. The government has committed to the Sustainable Development Goals (SDGs), but they will most likely prove quite difficult to achieve.

last contributed to D+C/E+Z in winter 2019/2020 as community leader and activist in Zambia. He started the Sun-spring Charity School in 2011. 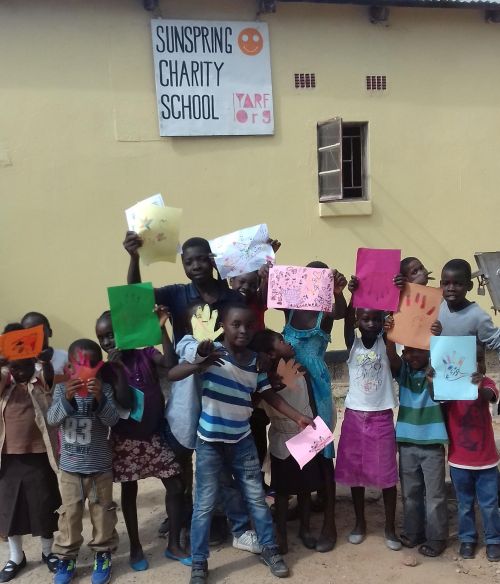 Masanta Zambia is struggling to develop its education sector: pupils of the private Sun-Spring Charity School, founded by Frank Masanta.

The SDGs are relevant for several reasons. They are designed to focus minds on what really matters and thus provide international guidance to individuals, organisations and governments all over the world. More­over, the SDGs create peer pressure. Finally, they help to build networks of expertise, knowledge and practice.

The Millennium Development Goals (MDGs) served a similar function. Since they proved successful in shaping the global agenda, the UN adopted the 2030 Agenda with the SDGs as a follow up in 2015. The MDGs were not entirely achieved, but they spurred progress in the right direction. MDG 5, for example, was to reduce maternal mortality by 75 % from 1990 to 2015. Zambia achieved a reduction of more than 60 % (from 580 to 220 deaths per 100,000 live births), which is certainly a positive development, but less than was aspired.

Zambia’s government has signed the UN 2030 Agenda and has expressed its commitment to achieving the SDGs. In February, the government presented the first draft of the 7th National Development Plan for the years 2017 to 2021. President Edgar Chagwa Lungu pointed out that he wants Zambia to become a resilient and diversified economy. Specific policies, programmes and projects are supposed to drive job creation and poverty reduction.

The recent announcements are in line with Zambia’s Vision 2030, which was adopted in 2011. Its aspiration is to make Zambia a middle-income country by 2030. The Vision’s key principles are:

It is understood that civil society and the private sector must be involved in achieving the SDGs, so public-awareness raising is essential. The Central Statistical Office must generate relevant data for monitoring progress, and the parliament must review matters regularly.

Several tangible measures are being taken. For example, constituency offices, which serve members of parliament to interact with citizens, are to be established all over the country. The Constituency Development Fund, which supports micro-initiatives at the grassroots level, will be increased.

The Finance Ministry has been urged to cooperate closely with international partners, including China, the USA, the EU and Russia. The idea is to attract investors and to mobilise support for government policies. For example, the government is keen on doing business with the Asian Infrastructure Investment Bank, the new multilateral agency, which was launched by China and is based in Beijing. Moreover, Zambia might benefit from China’s “One Belt, One Road” policy, which is designed to promote trade-relevant infrastructure internationally. The engagement of established donors is welcome too, of course.

The governments’ intentions are good, and its plans make sense. Nonetheless, it will most likely struggle to achieve the SDGs and the Vision 2030 as anticipated within the next 13 years. The reasons are fast population growth (3.2 % annually according to the World Bank), corruption and lack of funds.

According to Transparency International, an international non-governmental organisation, Zambia has made considerable progress in the fight against corruption in the last decade. The legal and institutional frameworks have been strengthened, bureaucratic procedures were streamlined and even high-ranking officials were prosecuted. However, TI warns that corruption remains a serious issue, affecting the police, the education sector and health services.

Lack of funding is a crucial issue of course. The plain truth is that Zambia is struggling to develop its education sector, for example. Education is a human right – and a responsibility of the state. But in view of an ever increasing population, it is difficult to provide. In Zambia, this sector remains underfunded in spite of having been allocated about 20 % of the national budget in recent times.

Education is vitally important for achieving all SDGs. Governments must ensure that every child has a classroom, a teacher and a walkable distance to school. Primary education is the foundation of human-capital development. Where would successful secondary students come from if there is no successful primary education? Good education will inspire the next agents of change the world needs.

According to Vision 2030, the government wants to promote work ethos. Its inability to fulfil promises obviously does not serve this cause.

Another top challenge Zambia must address is energy. Massive investments are needed to ensure that all households have access to affordable electricity. Most people use charcoal, and even many households that are connected to the power grid do so because it is cheaper. This practice is environmentally destructive. Forests, which are valuable carbon sinks, are cut down to provide wood for charcoal production. Such natural resource depletion contributes to global warming. At the same time, it diminishes poor people’s livelihood opportunities. It is estimated that 30 % of rural households’ income depends on forest products.

The government wants to slow down deforestation, ensuring that not more than 100,000 hectares per year are cleared of trees for charcoal production. This is a worthy goal. It remains to be seen to what extent government action will succeed – but as with the MDGs, significant progress will be welcome, even if not every aspiration comes true.

Frank Masanta jr. is a community leader and activist in Zambia. He started the Sun-Spring Charity School in a poor neighbourhood in Lusaka in 2011.
frankmasanta.jr@gmail.com