For a long time, Burundi was hailed as the post-conflict country making the best progress in Central Africa. But elections set to take place next year could wreck that reputation. The case of Burundi shows how hard it is to overcome warlord mentality.

contributed to D+C/E+Z in autumn 2014 as a Burundian expert on human rights. 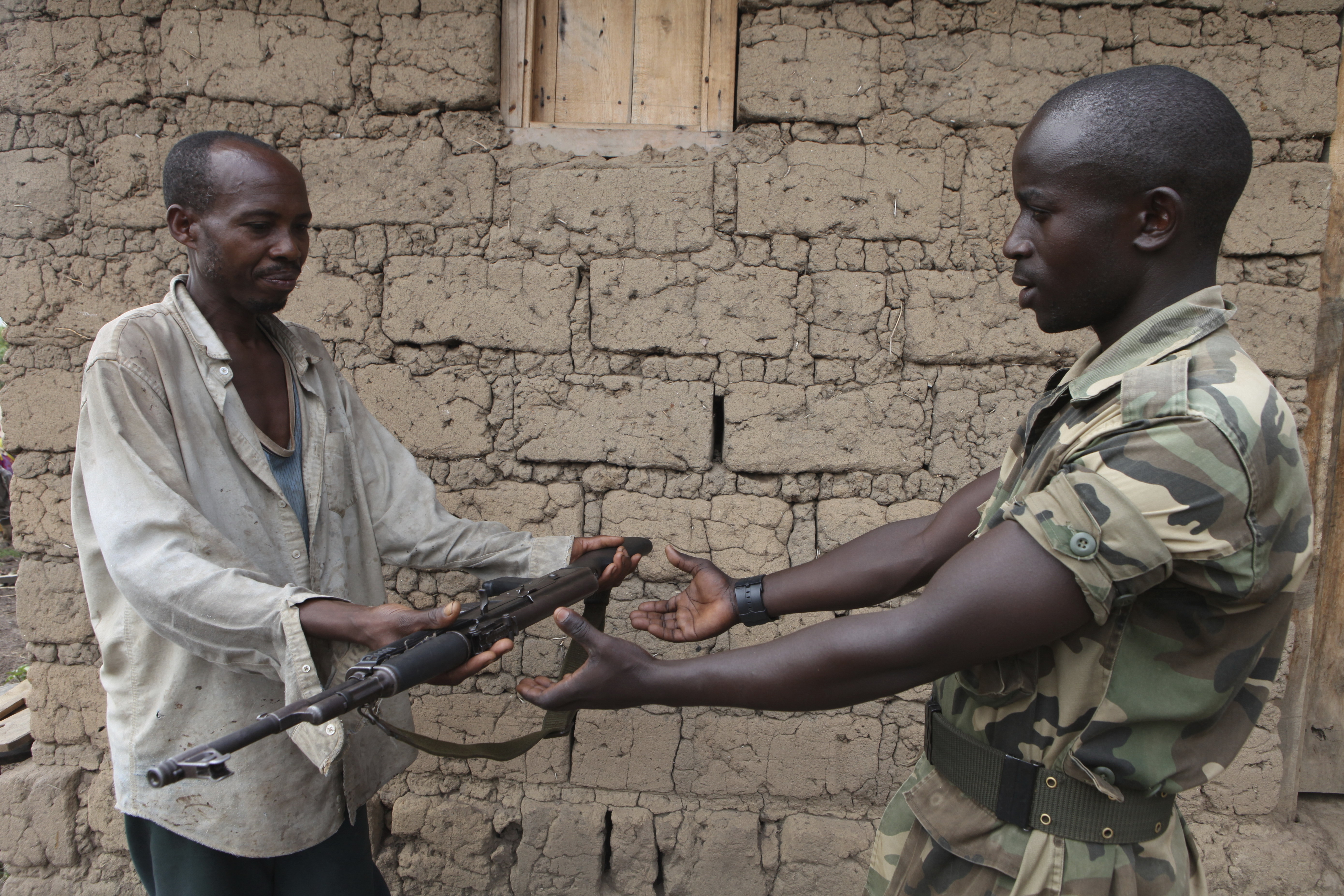 Ton Koene/Lineair After the civil war in Burundi, most of the rebels surrendered their weapons to the military.

On 26 June 2015, the people of Burundi will go to the polls. They will be voting in the third parliamentary and presidential elections since the end of the 1993–2005 civil war.

The Arusha Peace Agreement was signed by the most important leaders of the two population groups of Hutu and Tutsi in 2000. A three-year transition period was planned. However, the dominant Hutu groups initially withheld their signature. The peace agreement really came to force with the parliamentary elections of 2005. The elections offered an opportunity for reconciliation. Hutu and Tutsi are often considered separate ethnic groups, but that is an exaggeration as they share a common language and history.

Thanks to the peace agreement, political life normalised and there seemed to be a real chance of democracy and stability in the country. In 2003, the fighters of the largest rebel group, the “Conseil national pour la défense de la démocratie – Forces de défense de la démocratie” (CNDD-FDD), were integrated into the national armed forces. At the same time, their leaders formed a political party. In 2004, the new constitution was adopted, introducing a balanced quota system for the armed forces, the police and the Burundian bicameral system consisting of the Senate and the National Assembly. All government posts, parliamentary seats and positions in public administration need to be occupied by Hutu and Tutsi on a 60:40 basis. For police, military and Senate, 50 % parity are compulsory. The two vice presidents’ posts must be held by a Hutu and a Tutsi.

This clear quota system fuelled hope of greater political stability. What is more, the media in Burundi were considered fairly free. Urban areas in particular saw the development of a civil society eager to engage in debate. Finally, in 2009, the last remaining rebel group, “Forces nationales de libération” (FNL), laid down its arms and became an accredited political party.

But those once-bright prospects are now clouded. President Pierre Nkurunziza led his CNDD-FDD party to victory in both the 2005 and 2010 elections. At present, he is allowing speculation to build about the possibility of his running for a third term of office. The constitution does not permit that but in early March Nkurunziza was short of just one vote in parliament to approve a constitutional amendment that would remove presidential term limits.

Now, there are growing tensions between government and opposition. Observers described the conduct and outcome of the 2005 elections as largely free and fair. That was a glimmer of hope. But the 2010 elections were marred by widespread violence. The opposition boycotted the general election after accusing the ruling party of electoral fraud in the preceding local elections. And it refused to recognise the outcome of the vote, although the result was formally accepted by the international community.

Violence escalated especially between supporters of the ruling CNDD-FDD and the FNL in opposition. In the two years following the elections, many extrajudicial killings and other politically motivated crimes came to light but were neither properly investigated nor prosecuted.

According to human rights activists, government security forces executed around 300 former rebels and opposition supporters in the six months following the 2010 elections. The leaders of the main opposition parties fled into exile. The situation did not cool down until early 2013.

Since then, the CNDD-FDD has dominated politics in Burundi. It took one opposition party, UPRONA (Parti de l’Unité pour le progrès National), into government. All of the other major parties, by joining the boycott, excluded themselves from the national policy-making process. That undermines their credibility and, moreover, has weakened the institutions of the state.

The most important opposition parties for the 2015 elections are the “Mouvement pour la Solidarité et la Démocratie” (MSD) headed by Alexis Sinduhije and the former rebel FNL led by Agathon Rwasa. Both parties, however, are wrestling with a host of internal and external problems. They are also rumoured to have been infiltrated by government agents, planted to weaken and divide them.

After clashes between MSD supporters and national security forces in March, Sinduhije, the most promising opposition candidate, again had to leave the country. He was charged with organising an armed insurrection and a warrant was issued for his arrest. He will thus certainly not return to Burundi any time soon. What is more, the Burundi Ministry of the Interior suspended the MSD for four months.

Rwasa, the second opposition candidate, is not only weakened by internal party conflicts but also effectively under house arrest. He may not stage electoral rallies and he may not travel freely around the country.

President Nkurunziza, on the other hand, enjoys a great deal of support in the country, especially in rural areas, where the CNDD-FDD woos voters with personal campaign appearances, gifts and promises. The party’s victory seems assured; the only question mark hangs over the identity of its presidential candidate.

Despite its strength, the government is creating a climate of repression and fear in the run up to the elections. Increasingly restricting freedom of action and expression, it is also adopting a more and more authoritarian style of government and progressively constructing a police state. In February 2014, the UN Security Council condemned human rights violations and restrictions on the freedom of press, expression and assembly.

In 2013, the UN mission for Burundi (BNUB) – partly under pressure from international donors – attempted to kick-start a dialogue between the government and the opposition parties. The aim was to strengthen the parliamentary opposition and prevent another boycott of the elections.

Nevertheless, political tensions and politically motivated violence have increased in recent months. The government has tried to influence leadership appointments in the opposition parties and has dispersed demonstrations and gatherings by force. It has not done enough to punish party youth groups for acts of intimidation and violence.

The young militias, which are armed and instrumentalised by the parties, present a danger for the stability of the country. The biggest and most widely feared is Imbonerakure, the youth wing of the ruling party. In rural areas especially, it intimidates opposition sympathisers and spreads fear in the population.

Anyone reporting publicly on the arming of Imbonerakure and its political links risks detention and trial. The internationally known human rights activist Pierre Claver Mbonimpa, for instance, was arrested by government security forces in May and has since been waiting for his case to come to court. He had accused the Burundi government in a radio interview of arming youth militias.

Within the population, the wounds inflicted by years of civil war have certainly not all healed. The work of dealing with the past and promoting reconciliation is only just beginning. One of the most difficult tasks ahead is to persuade perpetrators and victims that they can live together in peace.

But there are lots of other smouldering social conflicts that could lead to a renewed escalation of violence. Poverty and poor prospects are widespread, youth unemployment is over 50 % – conditions are ripe for dissatisfaction, manipulation and violent revolt. And weapons are easy to obtain.

Tensions are also rising as large numbers of refugees return to the densely populated country. Most returnees no longer own land – or they find their former homes occupied and their fields farmed by others. Fertile land is in short supply. Conflicts can flare between families, neighbours and sections of the population. The courts spend a great deal of time resolving property issues.

To prevent further violence, all political actors need to act judiciously. Donor country governments and East African neighbours should encourage talks for a new compromise. Without genuine political dialogue, there can be no climate of reason.

The opposition needs to accept that it has an important role to play in keeping the government in check and accountable. It thus also needs to participate in the upcoming elections. The government, for its part, must guarantee freedom of expression and assembly for the opposition, the media and civil society. It needs to protect and respect human rights and refrain from fiddling with the constitution.

Jean-Marie Vianney ­Kavumbagu is a Burundian expert on human rights.