“Amount given to the groom”

The practice of dowry is seen in many cultures across the world. In India, it has been linked to violence against brides, and even murder. 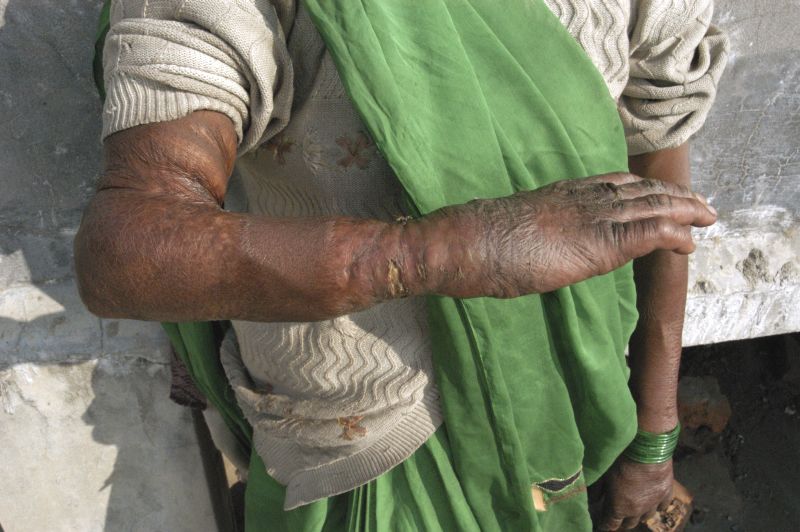 Mirjam Letsch/Lineair Dowry violence – scars on the arm of a woman who survived being set ablaze by her in-laws.

Newspapers use terms like “bride burning” or “dowry deaths” in this context. The background is often that the woman’s parents refuse to pay the additional dowry in-laws demand after a wedding. The good news is that the incidence of such cases as been going down in recent years. Nonetheless, the dowry tradition still has a very negative impact on Indian society.

Dowry implies that daughters are a burden. Parents have to compensate the groom’s family for taking their offspring. In Sanskrit, dowry is called “varadakshina”, which means “amount given to the groom”. The implicit meaning, however, is that an unmarried daughter is a matter of shame.

According to tradition, it is a father’s duty to ensure that his daughter gets married. In ancient times, marrying off a daughter who was less than five years old was called “prithvidaan”, and the father’s reputation would benefit from this practice. Even today, child brides become married on a special day called “akshaya tritiya” in some rural areas in northern India. According to UNICEF, India accounts for one third of the world’s child marriages. The need to invest in dowry causes great sorrow. From the moment of a girl’s birth, her parents worry about being able to afford it, and many fear future bankruptcy. Parents prefer setting money aside for the dowry than investing a girl’s education. Daughters thus grow up deprived – and they stay deprived after marriage. Husbands and in-laws benefit from the dowry, but not the women themselves. Wealth is transferred from their old to their new families, but they are bypassed.

Parents’ priority is to invest in sons who will take care of them when they are old, not in daughters who only cost money when they leave. Female foeticide is one result of the dowry system (see my contribution in D+C/E+Z, 2014/04, p. 156 f.). Another consequence is that girls are often not only deprived of education, but of health care and even food as well. If women’s status is to improve in South Asia, the dowry system must be discon­tinued.

India is a predominantly Hindu society, but dowry is equally pervasive among the Muslim and Christian minorities. This dysfunctional tradition similarly affects neighbouring countries like Pakistan, Bangladesh and Nepal.