In the Indian city of Hyderabad, prosperous men from the Arab world marry poor Indian girls for a few months, divorce them, and then return home without further obligations. The brides get a short glimpse of a wealthy life – and their parents save the money they would have to spend on dowry for a regular marriage. 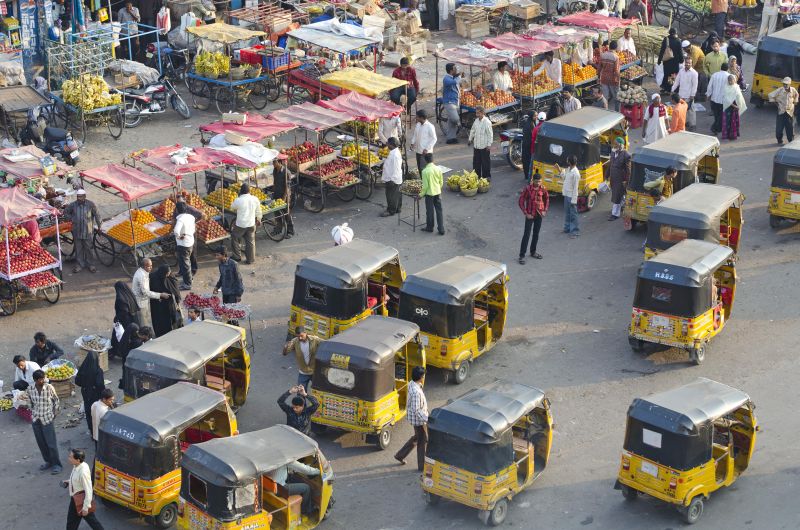 Hyderabad is a city of almost 7 million people in southern India. It used to be the capital city of a feudal state that was ruled by a Nizam, a Muslim king. Hyderabad’s historical centre, the Old City, dates back to medieval times. Its population is a mix of long-established elites and migrants, who have more recently arrived from rural areas and tend to be rather poor.

A community with an elite lineage is that of the Choush Arabs. They first came to Hyderabad from Yemen in the 18th century and held high positions in the Nizam’s army. This diaspora community has maintained its links with the homeland through marriage alliances. As other local communities soon noticed, the Choush Arabs do not have a dowry tradition. Rather, their custom is to pay a bride price. While bride prices have downsides too (see Philip Thon Aleu and Parach Mach on p. 12 f. and Angelina Diesch and Moses Ntenga on p. 18 ff.), they at least imply that a young woman is an asset, whereas the dowry system means that they are a burden (see box).

The bride price tradition is still alive among the Choush Arabs and it has given rise to a bizarre kind of marriage market, that is actually a kind of sex tourism, though it is not generally perceived as such. What happens is that women from the Old City’s slum temporarily marry Arab men who later divorce them and return home to the Middle East without them.

The poor people who move to Hyderabad from rural areas tend to lack labour-market relevant skills. Most struggle to survive by doing daily labour in the informal sector. They generally stay destitute and asset-less, but they nevertheless expect marriages to go along with dowries. No matter how pretty a girl is, her parents must afford a dowry if she is to find a husband from her own community.

Local bachelors consider the amount they get as dowry a reflection of their own value. I have been told that an auto-rikshaw driver will currently expect 100,000 rupees (about € 1,300). Young men say they “feel like beggars” unless they are paid. Their families certainly reject any such arrangement. In this setting, the civil-society organisations’ campaigns to abandon the dowry tradition are falling on deaf ears.

In view of the distress of destitute Muslim families, a perverse system has emerged. Men from the Middle East come to Hyderabad and stay in hotels near the Old City slums. These “sheikhs” pick a short-term “wife” from a shortlist of Muslim girls, and a formal marriage ceremony is soon held. The divorce papers are prepared and signed at the same time. The groom specifies the time he will spend with the woman right from the start – usually one to three months.

The men come to Hyderabad on visitor’s visa and leave without any liability. Contact is normally established by migrant workers who have left Hyderabad for the Middle East. They make some additional money by arranging this kind of tourism.

The girls are told they will have a good life with regular meals at the hotel. Moreover, they get nice new clothes and can go on outings with their “husbands”. They get a short glimpse of a wealthy lifestyle, but that kind of bliss is short lived.

The girls’ families are happy to collect the bride price, which normally tides them over for a few months. The other upside is that their daughter is now officially a married woman, so there is no need to pay a dowry. The downside, of course, is that she will be abandoned after a few weeks and is no longer eligible for a normal marriage. Socially, there is no stigma against second marriages, but only elderly, divorced and widowed grooms will be interested in marrying her.

Sheikh marriages are a depressing phenomenon. As a community worker puts it, there is reason to doubt that a marriage is a real marriage if the intent to get divorced is stated from the very beginning. Community-based organisations say they are helpless. “She is their daughter. If they want to marry her to a sheikh, what can we say?,” the community worker says. “For the sake of a few thousand rupees, they destroy their daughter’s life.”

It is easy to blame the families for knowingly leading their daughters into short-term marriages, but that would mean stepping into the blame-the-victim trap. The underlying problem is that many people simply cannot afford dowry. This is the main reason why prosperous men from the Arab region are in a position to exploit poor young women in India for a few weeks.

Sheikh marriages are really a commercialised transaction, with young women serving as mere commodities. In formal terms, the marriages seem to resemble the Choush Arabs’ tradition. But while that tradition has kept this particular community in touch with its homeland for more than a century, sheikh marriages are never meant to last.

Nilanjana Ray is an assistant professor at the Hyderabad campus of the Tata Institute for Social Sciences.
nilanjan.ray@tiss.edu