The Frankfurt-based Ensemble Modern consists of 22 musicians from 10 countries. They perform contemporary music to great international acclaim. "Ruang Suara" is the ensemble’s current project with composers and performers from Indonesia. In joint workshops, the musicians experimented with western and Indonesian instruments and created completely new soundscapes. Roland Diry, the managing director of Ensemble Modern, described the unique experience in an interview with Jana Jagalski. 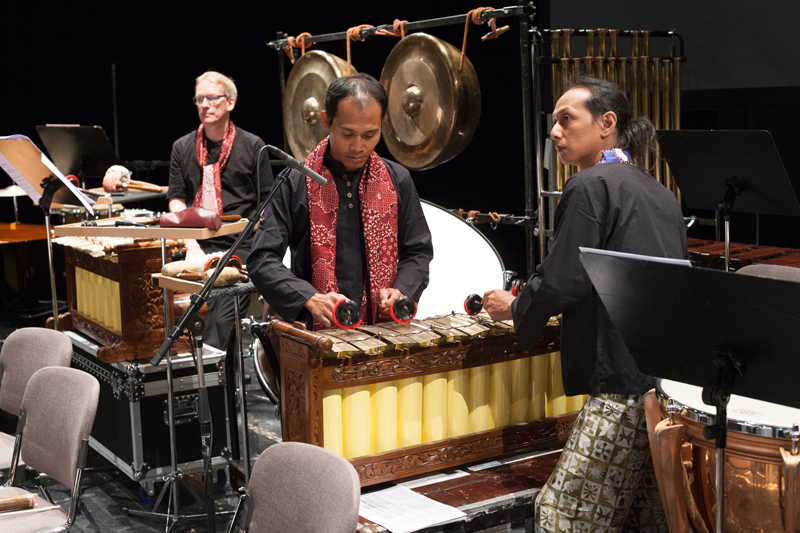 Why did you decide to start a project with Indonesian musicians?

Indonesia has a long and rich musical history and culture. The influence of Indonesian music, in particular gamelan music, reaches far beyond the country's borders. Gamelan refers to traditional music from Java and Bali as well as to the sets of musical instruments used. Over time, this kind of music has blended with other musical styles from around the world to form an interesting mix.

Did you consider any other countries?

No, not seriously. Initially we looked for interesting points of reference in a joint effort with KfW Stiftung, and particularly took Africa into account. Many African countries have musicians who play very well. But we ultimately chose Indonesia because we felt that working with Indonesian musicians would provide us with the best opportunity to make our ideas of contemporary music come true.

Did you have any previous experience with musicians from developing countries and emerging markets?

Yes, we have repeatedly cooperated with musicians from around the world in other projects. For example, we had a joint project with Indian musicians seven years ago. One of our violinists is Indian, which inspired us and helped us to make contacts. For our Into Project in cooperation with the Goethe Institut we invited composers to four world cities for a month and promoted their exchange with local artists from various disciplines nine years ago. We hoped that the music would reflect the character of each city, and it did.

How are musicians from emerging markets perceived in Europe?

There is no single answer to that question. What matters most to us, as an ensemble, is whether persons are interesting in and of themselves, so cooperation will result in highly sophisticated work.

How did you select the eight Indonesian musicians whom you are working with for the current project?

This time we took a completely new approach to finding our partners. We were in a different position than when we started our collaboration with Indian musicians, because we didn't have previous contacts in Indonesia and couldn't simply invite composers to Germany or commission something from them. That wouldn't have worked. Music in Indonesia is very social, much more so than in Germany. The act of listening is the alpha and omega of Indonesian music, but also of how people interact with each other in general.

So what did you do this time?

Well, we sought out "elder statesman" of Indonesian music. These experienced musicians and famous composers were our scouts, recommending talented young musicians. We wanted to find interesting musicians from the next generation and beyond, since they are the ones who will shape the country and its music in the future. The veteran musicians indicated 23 persons. We invited all of them to Jakarta for a week. A representative from each group of instruments in the Ensemble Modern accompanied us to Jakarta, and each of them performed a piece in order to give the local musicians an idea of what we had in mind. Next, the Indonesian musicians introduced themselves and presented their ideas, which were most diverse. We could only select eight people, and the choice was hard.

What do the composers you ultimately chose have in common?

Well, we ended up with a colourful cross-section of talent. Some of the composers are quite experienced, while the youngest is still a student. What unites them is certainly that they are all trained in contemporary music, but are all rooted in gamelan music in their own, particular ways nonetheless. All of them work as professional musicians in Indonesia. Unlike in Germany, Indonesian musicians tend to work as composers and perform their works.

Early this year, you invited the eight musicians to a workshop in Frankfurt. How did that go?

First of all, everyone had to get to know one another. It fast became obvious that the group was very open-minded. That matters very much, because it allows musicians to try out their ideas without inhibitions. Since the Indonesian and western notation systems are not entirely compatible, we requested help from an alumnus of the Ensemble Modern Akademie. He has perfect pitch and helped us to come as close as possible to what the musicians wanted, given that we could not simply transcribe things from one notation system to the other. I think it worked out very well.

Did you have to deal with any unexpected difficulties?

No, we didn't. We benefited from our past experiences. The challenges we faced tended to be related to music, like the incompatible notation systems I just mentioned. And in Germany, it proved to be rather difficult to find the exact instruments the Indonesian musicians needed.

Are there any moments you have particularly fond memories of?

Oh yes, I had many wonderful experiences. I was especially impressed by the way the musicians who unfortunately didn't make it into the top eight dealt with being rejected. They wanted to know why they weren't selected, but they remained very friendly and open-minded. It is absolutely essential that we treat eachother as equals. The recent experience has reinforced this lesson once more.

How are the Ruang Suara concerts funded?

The KfW Stiftung was prepared to initiate a cooperation project with Indonesia. It was only thanks to its support that we were able to stage this concert series. We travel as a group of 24, and air fares alone are very expensive. The Kulturstiftung des Bundes and Goethe Institut were important partners as well.

How do you hope audiences will react?

I hope that audiences will be open to hearing unusual and different sounds. It takes time to perceive the subtle nuances, especially because at first glance many things sound similar. In the run-up to the project, I heard someone say: "I don't really like contemporary music, but this project is fantastic." To my mind, that is a good illustration of our project not just being about a certain musical approach, but rather about the way intercultural cooperation creates the basis for something much greater.

Roland Diry is the managing director of the Ensemble Modern.
https://www.ensemble-modern.com