Decolonisation often led to arbitrary borders that became the cause of lasting grievances. Britain, a former imperial power, is itself affected by a border it drew across the island of Ireland. Regional integration in the EU context allowed peace to take root in Ireland. The same approach might, in theory, work elsewhere. Whether the fragile Irish peace can survive the United Kingdom’s exit from the EU is an open question. 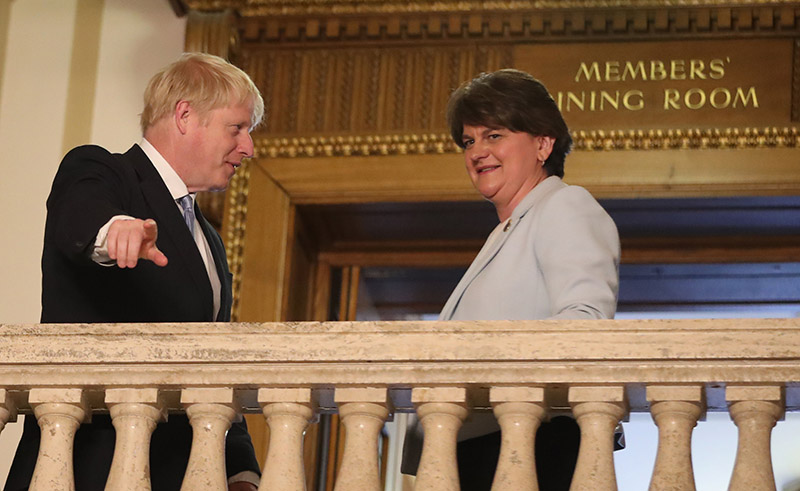 Niall Carson/picture-alliance/empics Disloyal future prime minister Boris Johnson with loyalist DUP leader Arlene Foster in summer 2019. Before rising to power, Johnson insisted there would be no border between Great Britain and Northern Ireland, but his Brexit agreement with the EU would introduce one.

During World War I, the independence movement in Ireland reignited and eventually forced Britain to withdraw from all but the north-eastern fifth of the island. That territory, renamed Northern Ireland, remained a part of what is now called the United Kingdom of Great Britain and Northern Ireland. (Great Britain is the main British island.) A heavily policed border was created less than 100 years ago, separating Northern Ireland from what would become the Republic of Ireland.

Back then, Northern Ireland contained a substantial majority of people who identified as British. They were predominantly Protestant and called “loyalists” or “unionists”. A repressed minority identified as Irish – the “republicans” or “nationalists”, who were mostly Catholic. Today both communities are of almost equal size.

There were recurring periods of conflict, involving armed groups from both communities. The longest such period lasted from 1968 to 1998. Over 3,500 people, mostly non-combatants, were killed in those years. This part of a G7 member was plagued by what one would call “fragile statehood” in Africa, Asia or Latin America. The security forces were far from neutral in the conflict: the police and army were intimately linked to illegal loyalists.

In 1998, the Good Friday Agreement finally established peace. The parties involved in the negotiations were representatives of both communities, with the governments of Ireland and the UK confirming the outcome in a treaty, and the EU and the USA providing support. The two communities agreed to share power in Northern Ireland. The national governments cooperated in a spirit of friendship. The agreement confirmed the right of people in Northern Ireland to choose the citizenship of either state or opt for dual citizenship. Both the UK and the Republic belonged to the EU and the single market, so people were free to move from one part of the island to the other, and there was no need for any customs controls.

Today, travellers hardly notice when they cross from one state to the other. There are no border controls. The road signs are monolingual in the UK and indicate distances in miles. In the Republic, road signs use kilometres and offer both the Gaelic and anglicised names of places.

Violence has dissipated to a level that most countries would regard as tolerable. Since 1998, most politically motivated killings have involved criminal elements within loyalism, though a smaller number was carried out by republican groupings that rejected the peace agreement.

On the island, few people foresaw the possibility of our English neighbours losing sight of the advantages of being part of the world’s largest trading bloc. In the Brexit referendum, 56 % of Northern Irish voters chose “Remain”, but in the entire UK, “Leave” won with 52 % (see box). People in Northern Ireland find it frustrating that a small majority of voters in the state with sovereignty over them has decided to pull them out of the EU – with no regard for the potentially deadly consequences on the Irish island.

Peace took root the more the arbitrary border that had been drawn a century ago became obsolete. With the UK leaving the EU, the border issue was suddenly back on the agenda – and with it, all the old tensions and identity issues.

The government in Dublin pointed out these things accurately. The other 26 EU countries supported its stance that a new hard border was unacceptable. Economic interests played a role, but the main goal was to protect the fragile peace.

Most people in Northern Ireland – whether Catholic or Protestant – endorse the Good Friday agreement. On both sides, however, some radical elements do not do so. The loyalist extremists tend to get less attention, but they are actually more dangerous.

Sinn Féin, the mainstream Republican party, which had links to the militant IRA (Irish Republican Army), accepted the peace agreement because its leaders understood that, in the wider context of EU economic integration, the two parts of Ireland were locked together to an extent that partition was becoming obsolete. The IRA did not make peace because of cowardice or weariness; it had sustained a long campaign including serious attacks on targets in Great Britain, but it decided to disarm and disband, and is no longer active. Nonetheless, a small minority of militant republicans still see the Good Friday Agreement as a means of legalising British occupation. If customs huts, police controls and army patrols were re-established, the militant fringe might consider them “legitimate targets” for attacks. While this threat to peace was instantly obvious to the Irish, it was more than two years after the referendum that the British public began to understand that fact.

The UK media typically referred to the “Irish border” problem, but that term itself proved that they did not understand the issue. “It’s not the Irish border,” was the accurate comment of Dara Ó Briáin, a comedian. “It’s the British border. The Irish border is the beach.”

Hard border or not

It took the UK government excruciatingly long to understand that a hard border had to be prevented. Only a few weeks ago did UK Prime Minister Boris Johnson finally accept this. He had been severely critical of the deal his predecessor Theresa May had struck with the EU. She would have kept the entire UK in the EU customs union until the conclusion of a new bilateral trade agreement between the UK and the EU. Johnson adamantly opposed her deal, stating that it amounted to an unacceptable loss of sovereignty. In October, however, he concluded a deal with the EU according to which there will be a new customs border in the Irish Sea, separating Great Britain from the whole island of Ireland.

What will happen is anybody’s guess. It depends on the results of the British general election in December. If Johnson’s Brexit deal is implemented, Northern Ireland will effectively remain in the EU’s single market, but there would be unprecedented controls on traffic between this minor part of the UK and Great Britain. Radical loyalists hate the idea and have reason to feel betrayed by Johnson.

Like most republicans, most loyalists want peace. However, they too have a small and well-armed extremist faction. It includes elements of two large illegal militias – the Ulster Volunteer Force (UVF) and the Ulster Defence Association (UDA). The extremists have threatened to instigate a violent campaign against Johnson’s proposed post-Brexit regime. It is too early to judge whether they have enough popular support to sustain a campaign of street demonstrations and disorder.

There are several loyalist parties, but the largest, the Democratic Unionist Party (DUP), is one of the most radical. It never really accepted the Good Friday Agreement, worrying that regional integration would eventually lead to the reunification of Ireland. It therefore supported Leave in the Brexit referendum and now feels left in the lurch by Johnson and his Conservatives who obviously do not care much about what happens in a small offshore territory. It is ominous that the leader of the DUP has met with illegal militias. In most countries, such an encounter between a policymaker and paramilitary gangsters would be regarded as a scandal. As usual, however, the UK press pays little attention to what is going on in any part of Ireland. The budding alliance between mainstream unionism and murderous loyalist thugs is now the greatest threat to Irish peace.