Waves of protest are rocking multiple countries in the Middle East and North Africa (MENA), bringing back memories of the Arab Spring of 2011. Sustainable development will be possible only if social issues are addressed and regional conflicts are resolved. It is in Europe’s own interest to contribute to finding solutions.

last contributed to D+C/E+Z in winter of 2019/2020 as an economist and freelance author. He used to work for KfW development bank. 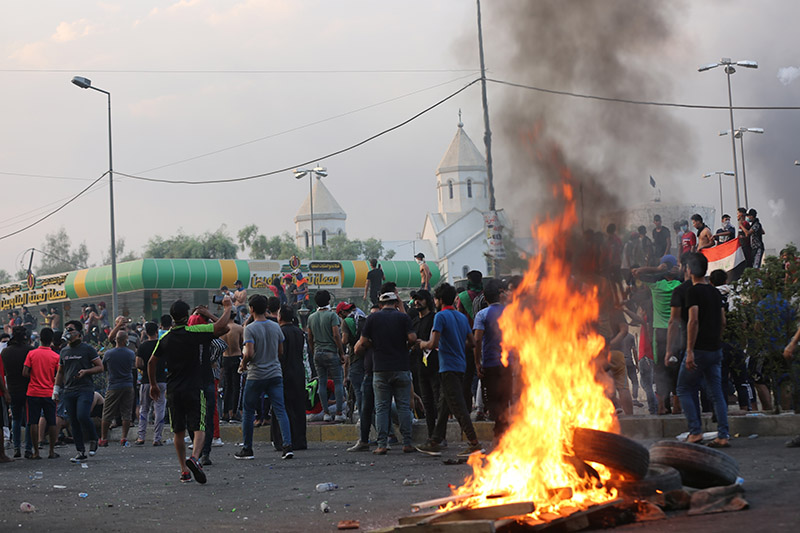 The images resemble one another. In the Arab world, large numbers of predominantly young people have taken to the streets, insisting on their right to a decent life – just like they did eight years ago. Mass protests occasionally flare up in individual countries, but this is the first time since 2011 that we are witnessing a series of them. They began in December 2018 in Sudan with what were at first local protests against the tripling of the price of bread. Local protests triggered rallies all over the nation, and they led to the toppling of Omar al-Bashir, the dictator, who had been in power for three decades.

In Algeria in February 2019, tens of thousands of people rose up when President Abd al-Aziz Bouteflika, who is elderly and has long been unfit to serve, announced his candidacy for a fifth term in office. He was also swept aside. In Egypt in September 2019, information about the exorbitant self-enrichment of the president’s family sparked large demonstrations. In Lebanon in October 2019, a tax on internet-based calls was the straw that broke the camel’s back and drove people into the streets. And since early October 2019, people in Iraq have been demonstrating in huge numbers against their precarious living conditions. On 30 November, Prime Minister Adel Abdul Mahdi resigned. In the meantim, anger about high fuel prices had driven crowds to rally in Iran, Iraq’s non-Arab neighbour. People’s economic pain has dramatically worsened under US sanctions. In the eyes of the demonstrators, their own regime must bear some of the blame.

As in 2011, the current protests were sparked above all by social grievances, then quickly grew into attacks on the entire political system. And just like in the past, those in power are responding with a mix of brutal violence and half-hearted concessions.

Most of the countries in question have experienced war and/or civil strife. They are now in a phase of economic weakness and are subject to the influence of external powers. They have little fiscal leeway because the economies are barely growing, their public sectors are bloated and inefficient, and the governments are heavily indebted (particularly in Lebanon and Sudan). The governments are trying to restore their short-term capacity to act by delaying overdue state investments and cutting social services.

Investors are not investing

Private, and especially foreign companies are also holding back investments, so steady demographic pressure is producing an army of unemployed people. Exorbitant levels of youth unemployment are particularly explosive. According to the International Monetary Fund, in all of the region’s countries, youth unemployment remains steady at 25 to 30 % or higher.

Half a million young people stream onto the labour market every year in Iraq, for example. A lack of employment opportunities combined with a worsening supply of water, electric power and other public services are creating a climate of dangerous social tension. Things can erupt surprisingly fast.

It is particularly risky when social grievances escalate in conditions of fragile statehood.  That is especially true of Iraq and Lebanon, not only because of their proximity to civil-war-torn Syria, but also because both countries have deep sectarian divides. Whereas in Iraq the Shias have dominated the government since the US invasion of 2003, in Lebanon, the Shia Hezbollah is a state within the state.

Against this backdrop, it represents a welcome surprise that Shias and Sunnis are rallying together in Iraq, and in Lebanon, they are joined by Christians. Across the faith communities, people are uniting to challenge the political establishment.

That they are overcoming religious difference is encouraging, but the violent response by security forces in Iraq brings back bad memories of the repression of the protests in Syria in 2012. When this comment was finalised in late November, some 300 people had been killed.

Things have remained relatively peaceful in Lebanon so far. However, it remains to be seen how the radical Shia Hezbollah will respond to public discontent in the future, and what impact the mass protests will have on Iran and Saudi Arabia, the two regional powers. Forty-five percent of all terrorist attacks worldwide take place in the MENA region. Forty-seven percent of all displaced people and 57 % of all refugees who have had to leave their home countries are from it too.

The MENA region will only find its way back to peace and development once its social issues have been resolved. In order to do that, its countries will have to overcome structural barriers to development, including the lack of international competitiveness, ossified public administrations and the people’s exclusion from economic opportunities and participation in public life.

The EU should make its contribution. It should not only invest in development cooperation, but above all conduct its trade relations with countries in this region on a more equitable playing field.

The second precondition for sustainable development in the Middle East is a resolution of the conflict between Saudi Arabia and Iran. That cannot be achieved by applying ever more pressure on Iran. What is needed is the framework of a comprehensive regional peace strategy that takes into account the interests of all parties involved.

The EU must break away from their currently passive role as an outraged observer and set an appropriate foreign policy in motion, engaging the international community. There is no other way to achieve sustainable social development in this challenging world region which is quite close to Europe.