Natural disasters often deepen pre-existing social divides. The earthquake that hit Nepal seven years ago was a striking example. It showed how important it is to make poor and marginalised communities in risk-prone areas more resilient – and that delayed reconstruction makes it hard to build back better.

last contributed to D+C/E+Z in summer of 2022 as Assistant Professor of Law at Tribhuvan University, Kathmandu. 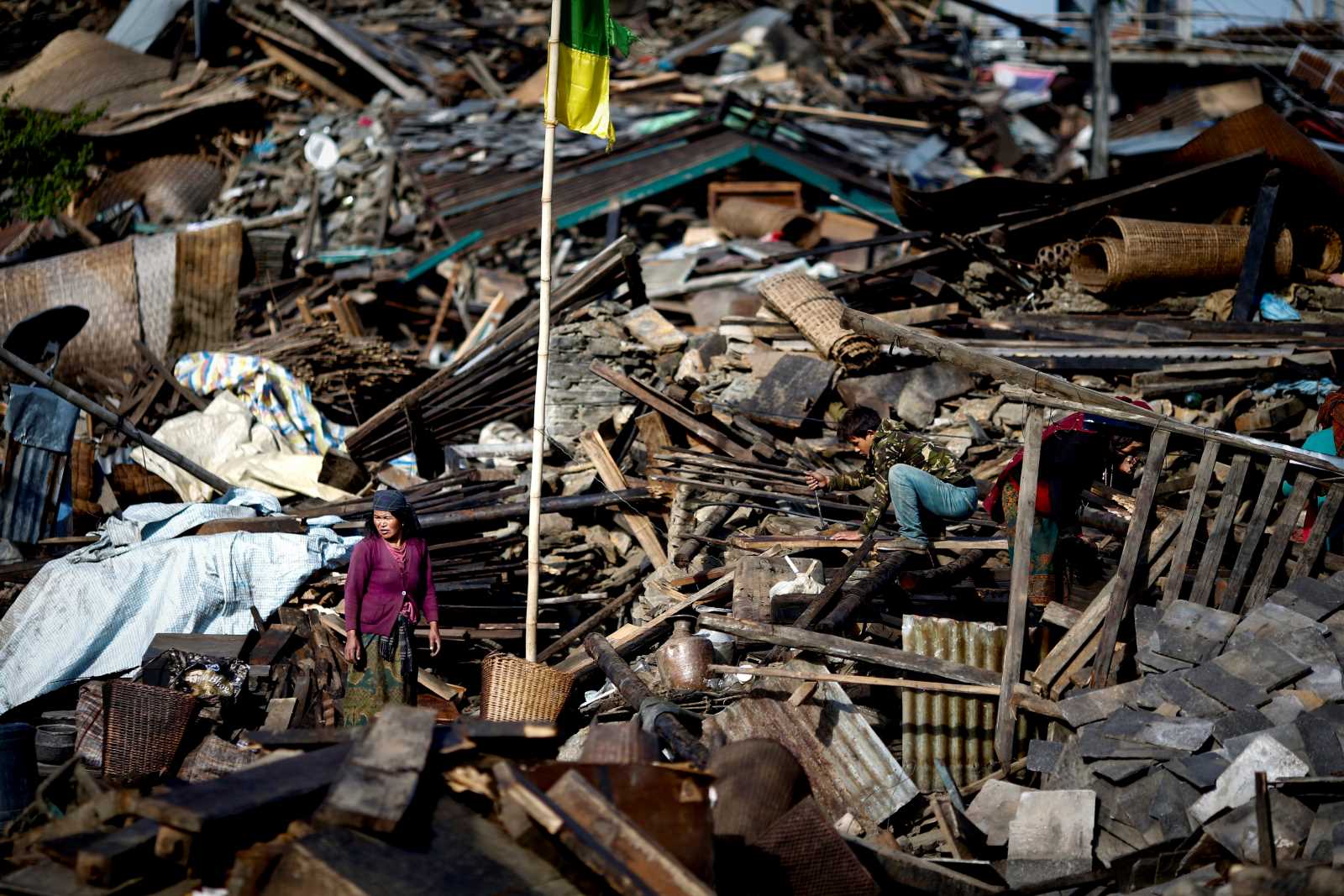 On 25 April 2015, a 7.6-magnitude earthquake hit Nepal severely. The epicentre was Barpak in the historic district of Gorkha, about 76 kilometres northwest of Kathmandu. The disaster affected 37 out of 77 districts. Fourteen severely damaged districts were declared to be “crisis-hit”, which meant they were prioritised in regard to relief and rescue activities.

The Post Disaster Needs Assessment Report of 2015 showed that the earthquake affected approximately one-third of the country’s people. The majority of them were unaware the aftershocks could continue for months, so they were hit unprepared. Indeed, hundreds of aftershocks followed, including a major one.

About 9,000 people were killed and tens of thousands injured. Houses, heritage sites and schools were destroyed, and so were health centres, trekking routes as well as water supply systems and hydropower plants. Hospitals were filled with the dead and injured. Nepal’s emergency response was overwhelmed. This is a poor post-conflict country, and the impacts of decades of civil war still matter (see my contribution on www.dandc.eu). Public capacities generally tend to be rather weak.

Accordingly, masses of survivors were left to themselves for far too long in the disasters areas in 2015. They desperately searched for loved ones who were trapped under the rubble. Those who have not experienced such a scenario cannot imagine the pain it causes. Indeed, the fear and trauma of many survivors remain unaddressed. People in Nepali villages – and even in the cities – hardly have access to psychological support. The mental health of countless people has thus suffered long term.

Fortunately, it was a Saturday

And still, Nepal was lucky in a certain sense. The earthquake occurred on a Saturday. Had it happened during the week, the casualty numbers would certainly have been much higher. The official data shows that more than 7,000 schools were severely damaged. On a weekday, the buildings would have been full of students.

Moreover, the calamity struck in daytime. It destroyed over 800,000 houses, but many people were outside. At night, masses would have been in bed at home – and thus even more at risk. The full truth, however, is that not every structure that collapsed did so immediately. A lot of harm was done after the main event.

One lesson is that buildings in Nepal must be constructed in ways that make them withstand disasters. Indeed, legislation regarding earthquake resilience has been passed accordingly (see my contribution on building codes on www.dandc.eu). The new regulations make sense, but – as is typical of least-developed countries – cannot be stringently enforced and are bypassed, especially by informal economic activities.

After the earthquake, over 100,000 people were forced to live in temporary shelters. News reports suggested that women and children were at high risk of trafficking and abuse. Reckless criminals were exploiting the vulnerability of families in desperate need. Human trafficking is a long-standing problem (see my essay on human trafficking on www.dandc.eu). Because families lost their livelihoods, moreover, child marriages and child labour increased. Many peoples’ welfare was thus affected irreparably in the long run, with women and girls experiencing particular distress.

In the early days, the government did not play an effective role in coordinating various humanitarian agencies from Nepal and abroad. On top of private and public outfits from Nepal, UN organisations and international non-governmental organisations were involved. Nonetheless, many communities had to wait long before support arrived. Some injured people thus did not get the care they needed and died or remained more severely disabled than would otherwise have been the case.

Things were particularly bad where the earthquake had destroyed access roads. To reach indigenous mountain communities, humanitarian helpers needed helicopters, which were in short supply. This was particularly the case in Nepal’s remote mountainous north.

As days progressed, stories of discrimination spread. In a rapid assessment, the Dalit Civil Society Massive Earthquake Victim Support and Coordination Committee spoke of “willful negligence” and “cast prejudice”. Deep divisions mark society (see my contribution on www.dandc.eu), so some communities were prioritised over others.

It mattered that many people lacked the documents they needed to get assistance. In many cases, government agencies asked for citizenship cards or other legal documents, such as land-ownership certificates for example. Some people had lost those papers due to the earthquake, more disadvantaged people had never had them in the first place. Requests of this kind led to the further exclusion of people from poor and marginalised communities. The natural disaster thus deepened pre-existing social divides. The implication is that more equal societies perform better in regard to relief and reconstruction, so reducing inequalities should always be on the agenda.

On 25 December 2015, the government established the National Reconstruction Authority. Its mission was recovery and reconstruction. Nonetheless, reconstruction efforts remained slow for the next two years, as the Asia Foundation stated in a monitoring report it published in 2019. Masses of people had to stay in temporary shelters or damaged houses. There was no clarity concerning government assistance and financial aid.

To families whose homes were destroyed, the government provided reconstruction grants of 300,000 Nepali rupees (the equivalent of about $ 3000) in three instalments. This policy was quite helpful. However, government plans to offer low-interest loans through the banking system largely failed. The reasons included that:

Many families, however, could not wait for government money to flow. They started rebuilding houses informally, without complying with earthquake-resilient building codes. While government action did help, more would have been achieved if it had not set in so late.

However, there was significant progress on reconstruction by the end of 2019, according to the Asia Foundation, with the majority of people moving back to rebuilt or repaired houses. In December 2020, the National Reconstruction Authority released a progress report. It claimed considerable progress in the reconstruction of private houses. Some 90 % of private houses were said to have been restored, but that figure is less convincing than it looks because it does not include a long list of heritages sites. While media reports show that there still are gaps, however, there certainly are examples of projects that worked out well. Integrated settlements with housing and infrastructure were completed and handed over to the earthquake-affected families.

In December 2021, the World Bank published an assessment of Nepal’s reconstruction efforts. It appreciated five approaches as good lessons:

Seven years later, people hardly speak about the disaster anymore. Their priorities have shifted, not least, because the coronavirus pandemic hit Nepal hard. The trauma lingers on nonetheless, and stark inequality persists.

The initial Post Disaster Recovery Framework after the earthquake spelled out a vision of building back better, not least by ensuring resilience, reducing landlessness and recognising women’s land rights. For many marginalised people, that has not come true. Had action started faster, more could have been achieved.

Due to its geography, Nepal will always be an earthquake-prone country. The first recorded earthquake was in 1255. Reports suggest it killed about one-third of the population of Kathmandu Valley. In the past 100 years, the country suffered major earthquakes in 1934, 1980, 1988 and 2011. Weather-related disasters are common too. Floods and landslides affect the country every year in the monsoon season, because of heavy rainfalls. Nepal therefore must certainly improve disaster preparedness, especially by boosting poor communities’ resilience.

Rukamanee Maharjan is an assistant professor of law at Tribhuvan University, Kathmandu.
rukumaharjan@gmail.com