In April 2013, the collapse of the Rana Plaza garment factory in Bangladesh killed more than 1,100 people. In response to this tragedy, the international community called for improvements regarding human rights and the security of buildings. Three international initiatives emerged with the goal of implementing reforms in Bangladesh, but they have not achieved much so far. The same is true of the Sus­tainable Textiles Partnership, which the German Federal Ministry for Economic Cooperation and Development (BMZ) is promoting. 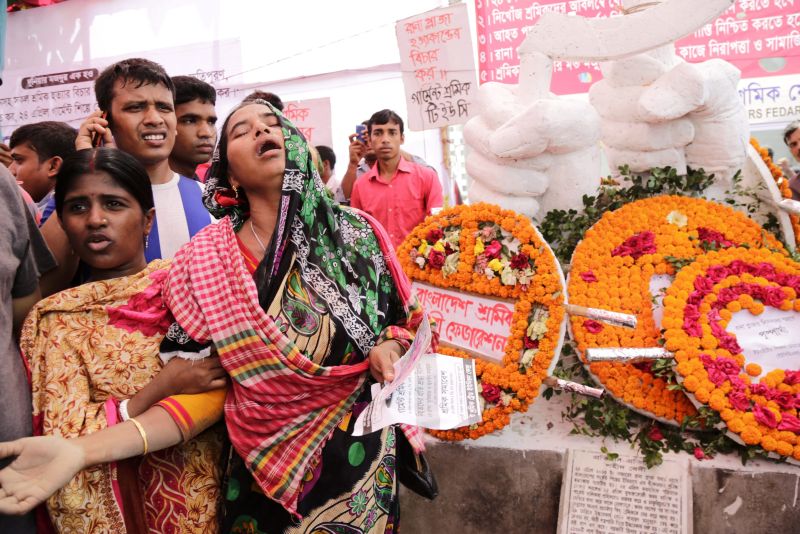 picture-alliance/dpa Memorial on the third anniversary of the Rana Plaza collapse.

The Rana Plaza tragedy was not an isolated case. It occurred in a long line of industrial accidents, collapses and fires in Asian textiles production. With more than 1,100 casualties, however, it was the worst tragedy at the time. The accident inspired three initia­tives to improve working conditions in Bangladesh’s garment sector:

All three initiatives are meant to improve building safety and fire safety, relying on factory inspections and workers’ education. The ILO efforts extend to strengthening workers’ rights. But despite financial commitments worth hundreds of millions of euros, little has been achieved so far.

In the first two years after the tragedy, a few dozen of factories were closed. Inspections were performed in half of all production sites in Bangladesh. However, only eight out of more than 3,400 inspected factories corrected all their shortcomings according to the study “Beyond the tip of the iceberg: Bangladesh’s forgotten apparel workers”, which was published by New York University in 2015.

Hundreds of thousands of people, moreover, work in factories that are not covered by the three initiatives. Even western companies that belong to the partnerships purchase products from such factories through suppliers and subcontractors. Long and non-transparent supply chains make controls difficult.

In the social realm, there has not been much improvement either. It is true that the government raised seamstresses’ minimum wage from the equivalent of $ 37 to $ 68 per month. However, most factories still do not pay the minimum wage. Moreover, the increase was insufficient. According to the non-governmental Clean Clothes Campaign Network, a wage that would cover living costs of seamstresses and their family members would have to be four to five times higher than the legal minimum.

Progress concerning the unionization of staff looks similarly poor. Since the Rana Plaza disaster, the number of unionised workers has doubled, but only from 2.5 % to five percent of the work force. Human Rights Watch the international NGO, keeps reporting layoffs of trade union members and even violence against them.

Another issue is the conflicts of interest that arise from the entanglement of politics and business. Some members of Bangladesh’s parliament are factory owners. They are most unlikely to vote for stronger regulations that boost human rights since that would mean higher costs for their businesses and plummeting profits. Moreover, the government will not implement measures that would make textile industries relocate to neighbouring countries.

The above-mentioned initiatives are all unlikely to achieve their goals. They lack independent monitoring mechanisms and effective sanctions. In the Alliance for Bangladesh Worker Safety, for example, the companies themselves oversee one another, and their commitments are not legally binding.

In contrast, the European Accord has a legally binding framework, but it will expire after five years.

In theory, trade union members and company managers can ask a court to arbiter in cases of dis­agreement on how to implement the Accord, and a German company, for instance, could be taken to court in Germany if it fails to do so adequately. However, the accused managers could claim that, so far, major progress was not feasible in the past three years, and once the agreement expires in two years, they cannot be held responsible any more.

The inadequacy of voluntary standards is also evident in a German initiative. At the end of 2014, Gerd Müller, the federal minister for economic co­operation and development, launched the Partnership for Sustainable Textiles in cooperation with private-sector companies, trade unions and civil-society organisations. The goal was to address the “most urgent challenges” of the textile sector, including better supply-chain transparency, living wages, the proper use of chemicals and the freedom to join unions.

Critics say, however, that Müller has watered down the standards of the Partnership under the fashion industry’s pressure. They emphasise that it is not sufficient to rely on companies’ voluntary commitments. Without legal liability, the Partnership’s impacts will remain limited.

An international treaty on human rights at the workplace could end such non-binding voluntarism. In September 2013, Ecuador requested the UN Human Rights Council to negotiate such an agreement. Even though the USA, the EU, Japan and others voted against this proposal, it was accepted in June 2014. Since then, a UN expert group has been working on a draft.

Observers are sceptical, however. In order to cover human-rights abuses all over the world, every nation would have to sign the treaty. If only one country with cheap labour does not do so, businesses would have an incentive to relocate to that country from signatory states where production costs would rise due to higher social and environmental standards. Such relocations are nothing unusual in the global fashion industries, and some companies have already moved to Myanmar and some African countries where standards are even lower and rule enforcement even weaker than in Bangladesh.

So far, many governments that officially support Ecuador’s proposal have done little to enforce the ex­isting UN Guiding Principles on Business and Human Rights in their countries. This stance shows that they fear competitive disadvantages. Against this background, it is questionable how serious Ecuador and other governments are about the international treaty they propose.

Apart from governmental efforts, lasting public pressure and more international consumer activism are needed to improve the working conditions and human rights situation in the countries where garments are made (see box). Ultimately, the international community needs valid minimum wages and production standards in the garment sector. Otherwise, countries will keep competing for international investments at the expense of workers’ rights.

International pressure and global standards are important, in particular because extreme poverty haunts the rural areas of Bangladesh and other “textile countries”. Many young women have no other chance but to work in garment factories. The high number of potential workers makes it difficult to organise in unions and demand better working conditions, given that companies can quickly replace any union member with a non-unionised worker.

Accord on Fire and Building Safety in Bangladesh:
http://bangladeshaccord.org/

Information on the Calculation of Living Wages:
http://www.cleanclothes.org/livingwage/calculating-a-living-wage