The principle of common but differentiated responsibilities (CBDR) is considered one of the key achievements of the UN Conference on Environment and Development in Rio de Janeiro in 1992. Rich industrialised countries now want to move away from that principle.

last contributed to D+C/E+Z in winter 2014/2015 as director of the Global Policy Forum. 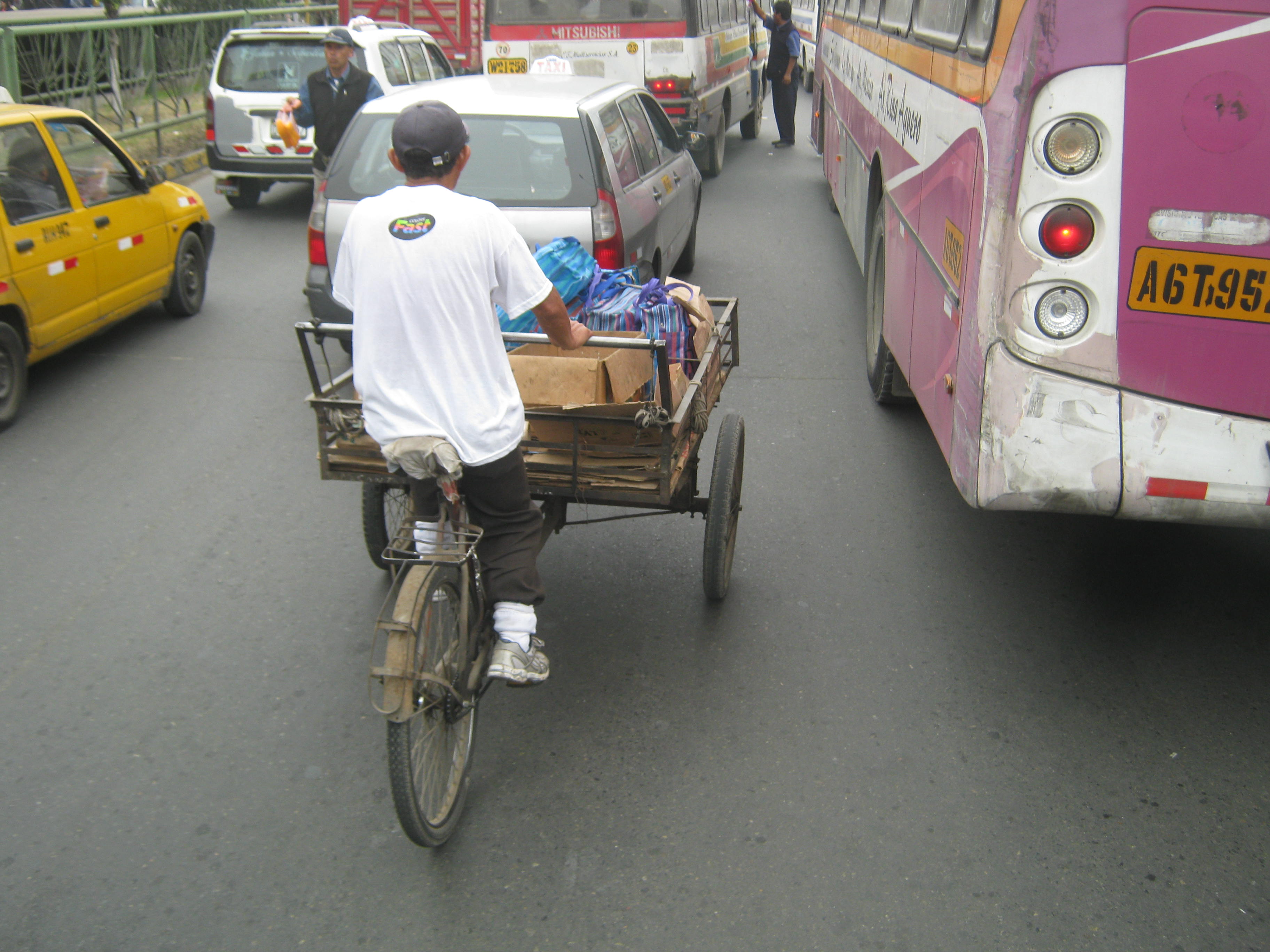 Dembowski Congested traffic in Lima: at this month’s climate summit in Peru’s capital, participants will assess, among other things, various countries' contributions to causing climate change.

In Rio in 1992, governments discussed how to fairly share the burdens and costs of global challenges like climate change. In Principle 7 of the Rio Declaration on Environment and Development and Article 3 of the United Nations Framework Convention on Climate Change (UNFCCC), governments acknowledged that their countries contributed to the destruction of the en­vironment to varying degrees. Each country committed to pay for the restoration of the ecosystem and for climate change adap­tation measures according to its individual contribution to causing the problem.

Twenty years later, this principle has become a focal point of current negotiations on climate change and the post-2015 agenda. The developing countries that make up the Group of 77 want to preserve the principle unchanged. However, the US, EU and other industrialised countries want to do away with it in its present form. They argue that global power structures have changed. In their view, fair burden sharing must include contributions to climate protection from emerging economies like China, India and Brazil.

If consensus cannot be found, there will be neither a new global climate treaty nor a global development agenda worthy of the name in 2015. The following questions are at the centre of current climate negotiations:

The CBDR principle is not limited to climate protection, however. At the Rio+20 conference in 2012, governments decided to draft universal Sustainable Development Goals (SDGs) for the post-2015 agenda. By agreeing to make the SDGs universally applicable to all countries, governments underscored their shared responsibility for sustainable global development.

It was also decided that the SDGs should take into account different national realities, capacities and levels of development. This proves that governments respect the principle of differen­tiated responsibilities corresponding to countries’ economic capabilities. In the SDG report that the Open Working Group of the UN General Assembly published in July this year, the international community reconfirmed this principle despite the controversy it has provoked.

CBDR could actually serve as the guiding principle for all global public goods. As a method of ensuring that all states are treated fairly, it could also become an important pillar of the post-2015 agenda. However, both would require governments to agree on:

Arguments that claim that the CBDR principle is no longer up-to-date because of geopolitical and economic change are misleading. For starters, completely discarding CBDR would do nothing to change the evident socio-economic disparities between countries. Massive income inequalities still exist, and have even worsened to some extent in recent years. There are corresponding differ­ences between countries’ economic capabilities and their contributions to global environmental degradation. International policy must take these differences into account even if governments decide to do away with the CBDR principle.

Even if there was no CBDR principle, therefore, legal principles and policy guidelines would still be in place to justify holding countries accountable to differing degrees. The advantages of the CBDR principle are that it combines all these principles, and that it has been enshrined in international law as part of the UNFCCC.


Revise rather than repeal

Instead of repealing CBDR, governments would be well-advised to revise it in a way to reflect a changing international environment. Doing so would acknowledge countries’ current socio-economic realities as well as their historical responsibilities.

Considering states’ opposing positions on the CBDR principle, it seems unlikely that a compromise is feasible between the US, which fundamentally rejects the principle, and the G77, which wholeheartedly embraces it. In climate talks in particular, it seemed for a long time that governments were playing a game of chicken: whoever budged first was the loser.It remains to be seen what difference the recent agreement of US President Barack Obama and Chinese President Xi Jinping on the need for binding emissions targets will make.

Although it is remarkable that they agreed, for the first time, on common but differentiated emission targets, the substance of these targets reveals them to be completely insufficient. Obama’s commitment to reduce greenhouse gas emissions by 26-28 percent of 2005 levels by 2025 falls short of his announcement at the ­Copenhagen Climate Summit to reduce emissions by 30 percent in this period. Xi did not make any measurable commitment, instead simply announcing that Chinese emissions would be curbed by 2030 or earlier It appears here that the US and China are following rather the prin­ciple of common but differentiated irres­ponsibility.

If we compare the various attitudes towards CBDR and assess the overlap, the following picture emerges:

In order to reach a consensus on the future of the CBDR principle, governments must be ready to compromise on two controversial issues in particular: differences between developing countries and the historical responsibility of industrialised nations.

The 133 countries of the G77 must acknowledge that they are not a monolithic block, but instead just as diverse as the group of traditional industrialised countries in terms of economic capacities and global environmental impacts. The future (financial) responsibilities of members of the G77 should reflect such diversity.

It is neither unusual nor new to make this kind of distinction between countries when administering and financing global tasks. Consider for instance the assessed contributions paid to the UN by its various member states. The sums are determined according to a scale of assessment that is based first and foremost on countries’ economic capacity. Among the 30 largest contributors are 10 nations that do not belong to the traditional group of industrialised countries. Six of them are G77 members (China, Brazil, Saudi Arabia, India, Venezuela and the United Arab Emirates).

It would not entail the dissolution of the G77 or other groups of countries to no longer categorise states simply as industrialised or developing. Nevertheless, poor countries have reason to worry that giving up the distinction between industrialised and developing countries could have nega­tive consequences. However, this does not have to be the case. On the contrary, the countries of the global South could benefit if, as part of a fair burden sharing from 2015 on, every nation is guaranteed a subsistence level of revenues to allow it to exercise its “right to sustainable development”. At the same time, richer countries would have to be willing to make a binding commitment to transfer funds and technology accordingly.

The industrialised countries, above all the US and the members of the EU, must officially acknowledge their historical responsibility for environmental degradation and global warming. They must agree, in principle, to pay compensations to developing countries. Western countries do not necessarily have to legally commit to pay damages or reparations de iure in an international treaty, they could also commit to such action de facto.

In light of the fact that many industrialised countries have not lived up to international promises (such as spending 0.7 % of gross national income (GNI) on official development assistance), the countries of the G77 have reason to feel distrust. In order to reassure them, industrialised countries will have to build confidence. In short, they have to be willing to make the first move. That is the only way to break the vicious circle of collective irresponsibility. Otherwise, the post-2015 talks will end in a stalemate.


Of benefits and burdens

Promoting energy efficiency and transitioning to a low-carbon economy would result in economic benefits and increase people’s quality of life in the long run. In the short run, however, only the companies that profit from the status quo will lose out. This is why some industries are blocking steps towards socio-ecological transformation. The automotive industry, for example, opposes the implementation of stricter carbon-emissions standards in the EU. The battle lines are drawn not between countries, but between the winners and losers of the transition to a sustainable economy.

The truth is that doing nothing will prove far more expensive than applying the CBDR principle, Nicholas Stern stated as much as early as 2006 in his “Review on the economics of climate change”. According to him, environmental damage is likely to reduce global GNI by at least five percent per year if the international community does not manage to agree on climate protection. By contrast, Stern estimated in 2006 that the annual cost of measures to reduce greenhouse-gas emissions would amount to roughly one percent of global GNI.

There is an important difference between the costs of action and inaction: the costs of inaction would be borne primarily by those who are the most vulnerable. The worst consequences would be suffered by those who live in poor countries, especially children, young people and the elderly.

It would be better if governments made those who caused environmental degradation and who have the necessary means pay for preventing, repairing and compensating the damage. This approach makes sense at national levels too. The principle of common but differentiated responsibilities thus has merit beyond international affairs. It can be applied to burden and benefit sharing within a society.