Yemen is stuck in a devastating humanitarian crisis. The reason is the civil war, in which foreign forces are intervening. The dynamics of the conflict are changing after the death of former president Ali Abdullah Saleh, but the suffering is likely to go on for quite some time. 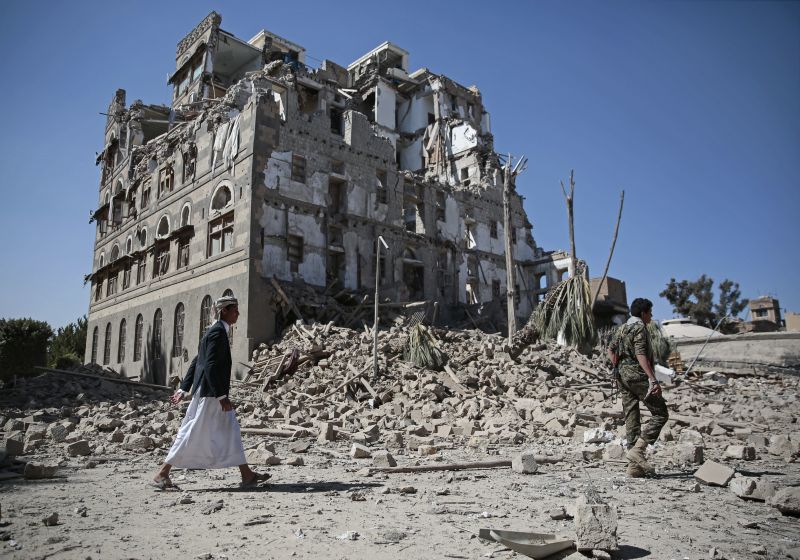 Mohammed/picture-alliance/AP Photo The results of a Saudi-led airstrike in Sanaa in early December.

Iran-backed Shia Houthi rebels – also known as the “Ansar Allah” group – killed Saleh on 4 December. Shortly before his death, on 2 December, Saleh declared the end of a 3-year-long alliance with Houthis in a televised speech and urged Yemenis to retake control of their country.

He also made explicit peace overtures to the Saudi-led coalition of Arab states, which have been fighting Ansar Allah since early 2015. The Saudis want to restore ousted President Abdrabbuh Mansour Hadi to power.

Houthis felt betrayed by Saleh because he was secretly in touch with the United Arab Emirates and Saudi Arabia. Abdul Malik al-Houthi, leader of Ansar Allah, described Saleh’s killing as a “great and significant occasion”. In 1978, Saleh became president of North Yemen, and later was the first head of state of reunited Yemen from 1990 on. His rule was marked by authoritarianism and corruption. He was toppled by protests in 2011.

The death of the former dictator is likely to change the dynamics of the civil war. It will also affect the balance of power between Iran and Saudi Arabia, two powers that are supporting opposite sides in Yemen.

From the outset, Ansar Allah’s alliance with Saleh was tactical rather than strategic. The Houthis fought against Saleh’s reign. It was the Saudi intervention that turned them into strange bedfellows. Their marriage of convenience displayed signs of dis­agreement from time to time. Three months before his death, Saleh described the Houthis as a “militia” bent on conquering the country. In response, the Houthi leadership accused Saleh of “backstabbing”. The ensuing clashes left four people dead and many more wounded.

The street battles that took place in Sanaa immediately before Saleh’s death were far deadlier. They killed at least 125.

While many hardliners in Tehran have hailed the departure of Saleh as a victory for Houthis, the break in alliance between Saleh supporters and Houthi rebels does not bode well for Iran and its position in the Yemeni civil war. There is a reason why a spokesperson of Iran’s foreign ministry called on both sides to resolve their differences peacefully and unify against the common enemy, Saudi Arabia.

Despite Ansar Allah’s proven capability in fighting asymmetric warfare and attritional guerrilla battles, Houthis lack the technological knowhow and experience of a trained conventional army. This deficit has so far been remedied by the presence of military forces loyal to Saleh. Most prominently, the Houthis almost managed to hit King Khaled International Airport in Riyadh with a ballistic missile. That would probably have been impossible without technical support from Yemeni army officers loyal to Saleh.

Saudis, meanwhile, have relocated Saleh’s son Ahmed, who was reportedly under house arrest in the United Arab Emirates, to Riyadh. They apparently hope that he might fill the power void left behind by his father and mobilise his loyalists against the Houthis. If that happens, Ansar Allah forces, who currently control Sanaa and vast areas in western Yemen, will face formidable battlefield challenges.

Iran has recently had the upper hand in this proxy war. Now its Revolutionary Guards are tempted to boost their support for the Houthis, urging them to take the battle further into enemy territory. More missiles have been fired on Saudi Arabia from Hotuthi-held territory.

All in all, Saleh’s death does not offer a promising prospect of the Yemeni civil war in the future, which has so far claimed the lives of over 10,000 people. The escalation of fighting has already taken a great toll on civilians and will only exacerbate the nationwide poverty and famine Yemenis have been coping with since the start of the civil war three years ago. Just as in Syria, the involvement of foreign powers is perpetuating the conflict, making it last longer than it otherwise would.

Maysam Behravesh is a PhD candidate in the Department of Political Science and an affiliated researcher at the Center for Middle Eastern Studies (CMES), Lund University, Sweden.
maysambehravesh.com