The end of a long struggle

At last India is free of polio. The victory over this disease, also known as infantile paralysis, is the result of systematic vaccination and educational measures.

last contributed to D+C/E+Z in autumn of 2022 as a Frankfurt-based journalist. 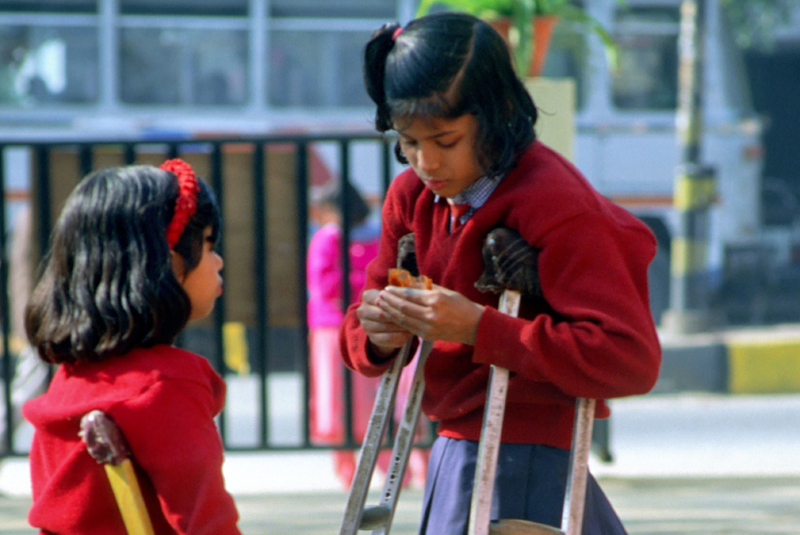 Latha Anantharaman Polio will in future no longer cause harm in India: affected children in Delhi.

Sadly, Rukhsar Khatoon is known throughout India. She is the last documented case of polio in the South Asian country. The little girl from West Bengal embodies both tragedy and success. Tragedy, because Rukhsar became infected in the 21st century even though it never should have come to that. Success, because this vast country with its population of 1.2 billion has finally become free of polio.

In March 2014 and after three years without any new infections, India was certified as being free of polio by the World Health Organisation (WHO). International experts heralded this as a major success since many had feared that India would never achieve this goal. The size of the country, its population density, poverty rate and hygienic conditions had made this seem unlikely.

Even in the early 1990s, more than 100,000 children fell sick with polio every year in India. In 2009 that number had fallen to “only” about 700. And finally with Rukhsar, in 2011 the last name was entered on a long list that has meant enormous suffering for many people.

Polio is an infectious disease transmitted from person to person. Normally, the virus is caught by the next victim via excreta as a result of inadequate hygiene. It attacks nerve cells in the spinal column, resulting in permanent paralysis of the arms and legs, and often in death. The victims are predominantly children aged under five.

At the start of the 20th century, polio was still feared in the industrialised countries. Even the former US President Franklin D. Roosevelt suffered paralysis. There is no treatment for those who have become infected. However, protection is offered by a preventive vaccination, which is routine for children in most countries.

North and South America have been free of polio since 1994, the Western Pacific regions since 2000, and Europe since 2002. Today polio remains endemic only in Afghanistan, Pakistan and Nigeria, and until recently in India too.

In the mid-1990s the country decided to implement a comprehensive polio eradication strategy and set out to immunise all children under five. This was carried out in national campaigns, which were held several times a year and in each of which 2.4 million volunteers penetrated the farthest corners of the country to vaccinate about 170 million children.

“The Indian programme to eradicate polio is exemplary”, says KfW project manager Gabriele Götz, “because it has systematically combined the vaccination campaigns with educational measures and countrywide monitoring”. With “Acute Flaccid Paralysis Surveillance” (the name of the monitoring system), the responsible persons can follow up any suspicion of new cases and provide additional vaccination quickly in the affected areas. KfW Development Bank has been supporting India’s battle against polio since 1996. On behalf of the German Federal Government, KfW has made over EUR 240 million available. This was primarily intended to finance the vaccine for many millions of children. “A key element of ­India’s success is the country’s high level of commitment, a comprehensive programme and good cooperation between the donors”, says Gabriele Götz.

The task facing India is now to preserve what has been achieved. Until the disease has been eradicated worldwide, there is always the danger of a new outbreak. This is why India has now not only begun to introduce routine immunisation everywhere, but is also passing on its experience to the three last polio countries, Afghanistan, Nigeria and Pakistan, so that in the foreseeable future the disease may also be a thing of the past there too. Only then can we be sure that Rukhsar Khatoon will truly remain the last Indian name on the list of those infected by polio.