International policy-making is often bewilderingly complex. Australian scholars have designed interactive online tools to give interested people an overview of how multilayered networks of stakeholders deal with climate change and ecosystem services. 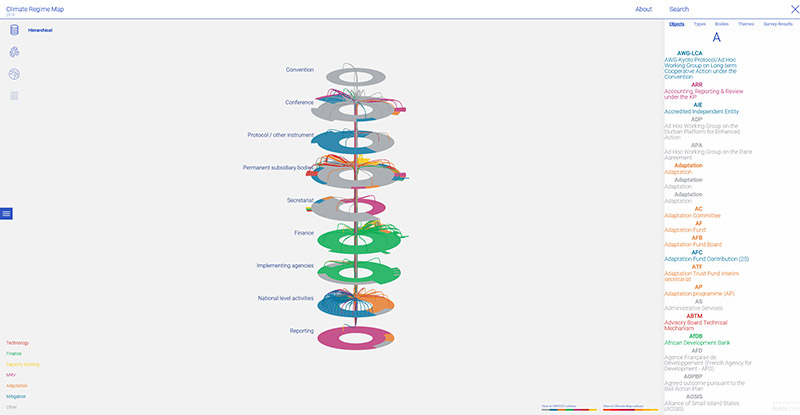 International policy agendas are of great public interest, but often hard to understand because they involve many parties pursuing a great diversity of interests. The UN Framework Convention on Climate Change (UNFCCC) is an example. It was designed to mitigate human-made climate change. To promote its successful implementation, it is essential to make people understand why it matters and how it works.

Tim Cadman of Australia’s Griffith University speaks of a “black box of international regimes”. Together with colleagues, he has designed an online tool that provides people with data that help to understand the scenario. At an event organised by Bonn University’s Center for Development Research (Zentrum für Entwicklungsforschung – ZEF) in May, he pointed out that it can help decision-makers.

Part of the problem is that multiple actors with multiple agendas wield influence at different levels. Cadman says that this fact is too often ignored. According to him, comprehensive visualisations can attract the attention of both stakeholders and the general public.

His Climate Regime map serves to analyse UNFCCC implementation. It was designed before the Paris Climate Summit in 2015 and is accessible online. The system it depicts is complex, so it is no surprise that the map is not easy to read. It uses a colour code to distinguish between different thematic areas, such as finance, capacity building, reporting or verification. It can be navigated in three different modes:

Cadman says that the second map was harder to design: “It is a much more complex policy arena.” For example, there was a need to distinguish public stakeholders from private ones. Moreover, the range of different ecosystem services is very wide, and their definitions tend to be based on empirical research rather than on desired policy outcomes. Some policy approaches do not go beyond assessing the economic value of an ecosystem service. Others, however, include schemes for offsetting costs or making users pay. Yet others involve general policy concepts. Typically, the underlying science is still evolving.

Both the Climate Regime and the EcoRegime maps primarily serve as inventories of stakeholders. By navigating them, however, one may see what issues have attracted policymakers’ attention. They also provide information concerning the evolution of policies and programme delivery. The Climate Regime map shows, for example, that mitigation measures have been established in the UNFCCC context, but adaptation concepts are still lacking. Moreover, capacity building is still underfinanced. In a similar sense, the EcoRegime map shows that much more knowledge about ecosystem services needs to be generated and that existing knowledge often does not lead to meaningful initiatives.

While the maps can be helpful tools, Cadman admits that they may also appear quite chaotic, revealing the institutional complexity of international policy and agendas. To benefit, people have to invest some time in making themselves familiar with these online tools. Cadman thinks the effort is worthwhile: “The maps might tell you a story that you might not actually know until you put data into visualisation.”