Price does not guarantee fairness

Many people buying a branded fashion garment think that the higher price they pay means a better quality product and better working conditions for those who made it. Sadly, they are generally wrong: just like discounters, expensive fashion labels have products made in poor conditions.

last contributed to D+C/E+Z in spring of 2022. She chairs the board of directors of the civil-society organisation FEMNET, which campaigns for the rights of women in the textile sector. 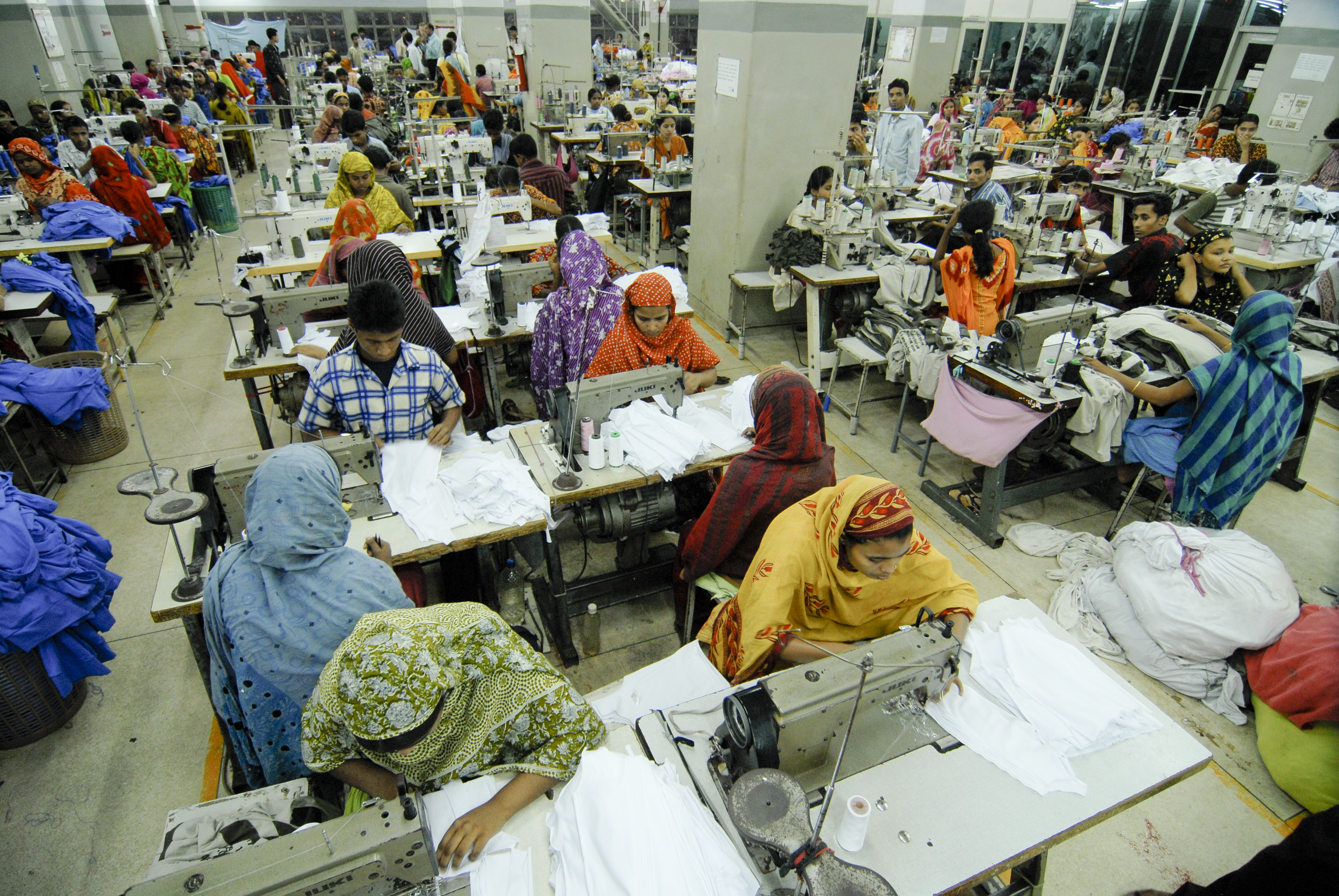 Jörg Böthling/Photography The working conditions of many seamstresses must improve – not only in Bangladesh.

Textile manufacturers’ associations like to claim that their members, unlike budget brands, work with “clean” suppliers. That claim prompted me to take a closer look at what is happening in Bangladesh. With the help of civil-society partner RISE (Research Initiative for Social Equity Society), I conducted a local investigation, comparing work conditions at suppliers making garments for quality brands such as Hugo Boss and Tommy Hilfiger and those supplying fast-fashion retailers such as H&M.

To start with, it was very difficult to find the garment-makers that supply Hugo Boss. There are around 5,000 clothing factories in Bangladesh employing 4 to 5 million workers, 80 % of them women. RISE identified two sewing factories. The conditions there were just as bad as at other factories. At one Boss supplier in Chittagong, for example, workers were exposed to constant verbal abuse and many did not even have a formal employment contract. Overtime was compulsory; the seamstresses did not know when they would be free to go home. That, in my view, amounts to forced labour because those people cannot plan their lives.

I also discovered that parts of the factory were apparently so poorly constructed that inspectors have recommended they should be closed. In the wake of the Rana Plaza disaster on 24 April 2013, in which 1,134 people died and more than 1,500 were injured, over 180 predominantly European companies signed an Accord on Fire and Building Safety in Bangladesh. Hugo Boss never signed up.

The accord provides transparency for the first time, because the inspection reports are published on the internet. They allow trade unions, non-governmental organisations (NGOs) and people directly affected to learn about the state of premises. Accordingly, I read the report concerning the Chittagong factory where Hugo Boss garments are made. The inspectors noted that a number of concrete pillars supporting the factory were not strong enough and they recommended that parts of the factory should be closed.

Although fashion discounter H&M boasts about sustainable production and fair employment, the working conditions in the factories visited in Bangladesh are as poor as everywhere else: RISE interviewed a total of 115 employees at 12 locations, and five of them made garments for H&M. Some workers had no written employment contract, and none of the factories had an elected works council. Maternity leave was not granted properly, compulsory overtime was considered normal and women were verbally abused.

In comparison to Hugo Boss, however, H&M does practice transparency by publishing its list of suppliers. The fashion giant claims that it requires garment-makers to pay a “fair wage”, but does not state how high that should be.

Trade unions apparently play no role in H&M production and marketing. In Germany, H&M resists works councils, and employees who demand their rights can face long lawsuits. Three-quarters of H&M’s female workforce are employed on part-time contracts. The reason is that it is much cheaper to hire students with ten-hour contracts than to employ experienced staff. Given that H&M treats its employees like this in Germany, does anybody expect the situation to be better at suppliers’ factories in Bangladesh?

Many companies today acknowledge social responsibility and require suppliers to meet certain standards, which are then verified in “audits”. However, what was supposed to be a quality seal for the companies is largely a multi-million business deal for the auditors.

One factory in Rana Plaza was inspected by TÜV Süd and TÜV Rheinland prior to the building'’ collapse. I have a copy of the TÜV Rheinland audit. Aside from the issue of building safety, which TÜV insists was outside its remit, the audit seems absurd. The overall verdict on the factory was “improvements required”. But the few shortcomings they noted did not lead the auditors to demand that production should stop until improvements were made.

According to the audit, there was no child labour and no forced labour – although what is compulsory overtime if not forced labour? – and no discrimination in the factory. These findings are entirely unconvincing. The auditors also reported that workers enjoyed freedom of association. While it is true that most factories in Bangladesh have what is known as a “participation committee”, it is not normally an elected body; its members are appointed by the management.

It is a scandal in its own right that the audit reports are not published. They remain confidential – known only to factory owners, their clients and inspectors. Workers and unions learn nothing. So even when an audit states “improvements required”, the factory owner can still muddle along.

The Tazreen Fashion factory that burned down in November 2012 was also allegedly inspected before the deadly blaze. By August 2014, a total of 125 workers were known to have died in or as a result of the fire. Another 150 persons suffered significant to serious injuries. The factory obviously lacked adequate emergency exits and fire escapes, but no remedial action was ever taken. Such shortcomings are apparent to non‑experts, so why did the auditors not identify them? Was the factory really inspected at all?

The Tazreen factory belongs to the Tuba Group, which is owned by Delwar Hossain. On several occasions, this man has managed to buy his freedom on bail, most recently on 5 August 2014. He put pressure on the court by withholding three months’ wages from 1,600 female employees and refusing to pay them unless he was set free. The Tuba Group’s clients included German companies such as KiK and Lidl as well as international retailers like Walmart and C&A.

It is totally bizarre that the national contact point of the Organisation for Economic Cooperation and Development (OECD) dismissed a complaint against KIK in the Tazreen context. It was filed in May 2013 by Uwe Kekeritz, a Green member of the Bundestag. The OECD argued that KIK had no direct responsibility for the fire because, at the time the fire occurred, it no longer had garments made there and had no significant influence on the safety precautions taken.

If KiK had inspected supplying manufacturers ahead to placing orders, as the company claims to do, the lack of emergency exits would surely have been noticed. The fire could have broken out at an earlier date, when KiK was still ordering garments there. The truth is that KiK was criminally negligent. The fact that the OECD contact point fails to acknowledge this highlights the problem of it being based at the Ministry for Economic Affairs. NGOs have criticised that for years.

Client companies are not the only ones who have a responsibility. So does the government of Bangladesh. Under both national labour law and the conventions of the International Labour Organisation (ILO), its obligation is to safeguard the human rights of clothing-industry employees and to enforce labour laws. The German government, moreover, also failed to do all it can to help protect human rights in Bangladesh.

The Federal Minister for Economic Cooperation and Development, Gerd Müller, recently launched a textile alliance. I myself was actively involved in its action plan, which aims to achieve tangible improvements in social and environmental standards across the textile and clothing industry. But the bulk of the textile industry at present refuses to join. It would make sense to require them by law to live up to their duty of care concerning their supply chains. This approach would force every enterprise to live up to norms and not just those that voluntarily join an alliance.

Consumer choices matter too. At Primark, the discount chain, a T-shirt costs less than a cup of coffee or a bus ride into town these days. The low price reveals a lack of respect for seamstresses’ work. Everyone must understand that insisting on bargain prices causes suffering elsewhere, for example in Bangladesh.

Textile prices have stagnated for years; cheap garments are now the norm. Instead of buying disposable fashion wear, we should buy fewer garments and be more selective. There are a small number of labels worth looking out for, such as Fairtrade for cotton for social standards and GOTS for environmental standards. Companies that are members of the Fair Wear Foundation are seeking to improve working conditions for garment workers. For more information about labels you can trust, go to: http://www.femnet-ev.de/index.php/de/themen/oeko-faire-kleidung/siegeluebersicht.

Gisela Burckhardt is a development expert, CEO of FEMNET and a long-standing campaigner for improvements in working conditions across the clothing industry.  Her book “Todschick. Edle Labels, billige Mode – unmenschlich produziert” is currently on bookstands, published by Heyne‑Verlag.
gisela.burckhardt@femnet-ev.de