The glowing happiness of a bride and the pain in the eyes of a girl sold into sexual slavery seem to be a world apart. For too many young women in Asia, however, wedding is about the latter, not the former. 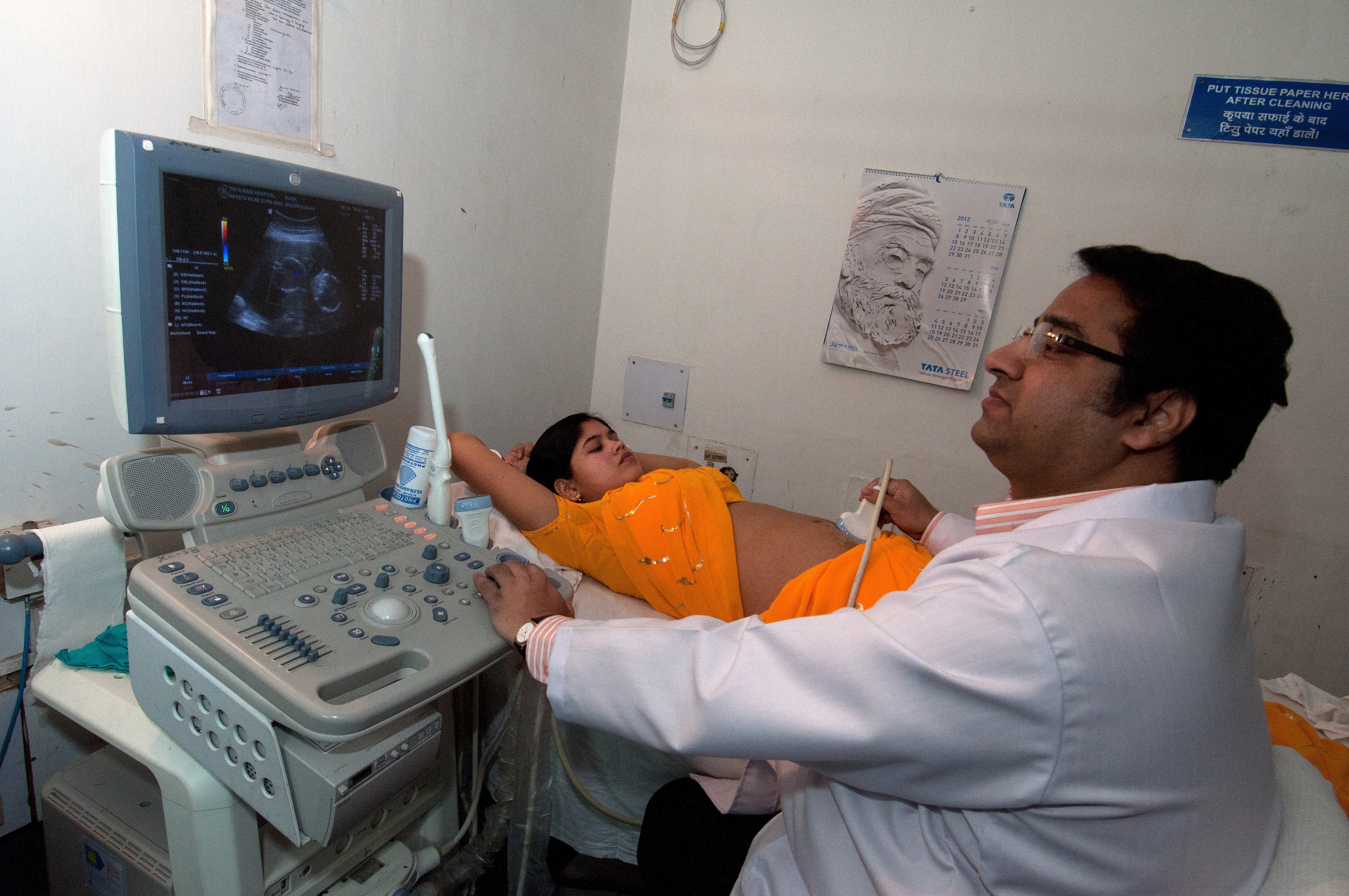 Nectoy/Lineair Ultrasound exami­nation of a pregnant woman in Jamshedpur, India.

Bride trafficking is the buying and selling of young girls to be the “wives” of men who are considered unmarriageable in their own communities. These men may be old, destitute, unemployed, widowed, of low status or disadvantaged in other ways, such as being physi­cally or mentally disabled. They want a sex slave and a domestic slave combined into one person. The word “marriage” is a euphemism because the men’s communities typically do not recognise the relationships.

Why do men buy “wives” from far-off places? Men from rich western countries tend to do so if they are too shy or otherwise psychologically unfit to enter into a relationship of equals. In Asia, however, the reason for buying brides tends to be that societies have reduced the number of girls through female foeticide and female infanticide.

There simply are fewer girls than boys in every generation, and, when they come of age, the less desirable men do not find wives. Men from rural areas are often particularly desperate because bride shortages are ex­acerbated by female migration to urban and more prosperous areas. Perversely, the apparent shortage of girls in patriarchal societies like India and China does not deter communities from continuing their preference for sons. Sons are equated with blessings and wealth. In certain regions of India and China, many infant girls are aborted, killed after birth or abandoned.

Sociologists have associated this with the patriarchal system of passing land assets on to sons only. Sons are the line of inheritance, and take care of parents in their old age. Daughters, however, join an­other family, so there is no point in investing in their future. Daughters are expected to look after their in-laws, rather than their parents. Sons mean social security, whereas daughters are liabilities.

Young girls who are sold off as brides are the victims of unbalanced sex ratios. They are the unwanted girls who were born into poor families living in a pa­triarchal culture. They were given a chance to live, but were made aware at every step that their existence was a curse for the family. The daughters internalise this fear of stigma and cooperate in their own sale into slavery. The girls’ communities view the traffickers as saviours of family honour rather than criminals.

There are different degrees of abuse. At one end of the spectrum, girls are valued due to the bride shortage, so their parents ask for monetary compensation. At the other end of the spectrum, kidnappings occur. There are also cases of group procurement of girls by middlemen. In all cases, the girls become commodities to be sold or bought bringing profit to the trafficker. Ever more often, brides are trafficked from abroad. India, China, South Korea, Japan and Taiwan are countries where this is done.

In India, daughters are raised as guests who will eventually join the households of their husbands. Since the girl’s family has to pay a dowry to get her married, she is considered a drain on the family’s resources. Fathers who cannot afford a dowry, would rather send their daughters away to some far-off place than face the stigma of living with unmarried daughters beyond their adolescence.

Poor families often do not let infant girls survive because they want to avoid getting even poorer. Among those who can afford sex-determination tests during pregnancy, the selective abortion of female foetuses has become routine.

India’s missing women have long been a matter of concern. As early as 1881, the first census revealed an unbalanced sex ratio in what are now the northwestern states of Punjab, Haryana and Rajasthan. Back then, the higher castes and landed classes were reported to practice female infanticide. More recently, it has been estimated that over 10 million female foetuses have been aborted in India in the past 20 years. In Haryana and Punjab, there are now only 800 girls per 1000 boys.

Today, men from north India are “importing” brides from other Indian regions. The market has become so profitable, that traffickers have expanded their “sourcing” to Nepal and Bangladesh. The girls are auctioned to the highest bidder. They are forced to live in an unfamiliar region, the language of which they do not speak and the customs of which they do not know. There is no one to help a trafficked bride if she is abused or has to live under conditions of slavery. In the worst cases, “husbands” sell their wives to other persons if they are not satisfied with the women’s services.

In China, female foeticide is linked to the one-child policy which the government adopted in 1979. Even though rural families may be permitted to have two children, if the first child is not a boy, couples go in for foeticide for the second child until a boy arrives. In effect, the one-child policy has become a one-son policy.

Internationally, the normal sex ratio is 103 to 107 boys per 100 girls. In China, some regions have 140 boys per 100 girls. Millions of female foetuses are aborted in China. Today there are an estimated 37 million more men than women in China. Histori­cally, the stigmatising term “bare branch” was used for Chinese men who were forced to remain single. In a society that values the family, not having one is shameful.

Today, China is witnessing a “marriage squeeze” with too few women for the number of men wanting to marry. The shortage of potential wives is especially acute in rural areas because teenage girls migrate to the cities in search of work. The share of single men is especially high in poor provinces.

Bride prices have risen, as more men compete for fewer women. For a son to successfully attract a bride from his own community, his parents must save money to pay a bride price and build a house. It is easier to make a one-time payment and buy a girl.

The result is an increase in trafficking of girls for marriage and even kidnapping of little girls. Marriage brokers tour China’s rural areas. They kidnap or deceive women and girls for sale to a prospective husband. Allegedly, a kidnapped bride can be sold for $ 600. Little girls are also kidnapped to be brought up by families with surplus sons and eventually serve one of them as a bride. There is even a market for trafficked brides from North Korea and Vietnam.

Whether sold by their parents or kidnapped, the girl is headed towards a life as a victim. She is the one to suffer. She faces various kinds of discrimination and is subjected to domestic violence. Some families deliberately choose to buy a bride from a distant place because she will not be able to run away. This consideration clearly indicates what an intolerable life awaits her.


What can be done?

The Indian government has not really woken up to the problem of bride trafficking, even though Nobel Laureate Amartya Sen and others started raising awareness two decades ago. An early success was the banning of prenatal sex determination in 1994. However, illegal sex determination tests continue. Civil-society organisations are campaigning on the matter, and while they are gaining momentum, they have not prevailed yet.

The Chinese government recently announced that it would begin to phase out the one-child policy. This may be a step towards reducing bride trafficking. In both countries, however, it will also be necessary to change cultural values in order for families to be as happy with having girls as with having boys.