In China, the state claims the right even to define the composition of families. The Communist government practises a rigid form of state birth control that is known in the West as the one-child policy. That policy has now been softened but it still has far-reaching implications for society.

Astrid Lipinsky is an assistant professor at the Sinology Institute of the University of Vienna, her essay for D+C/E+Z was written in early 2014. 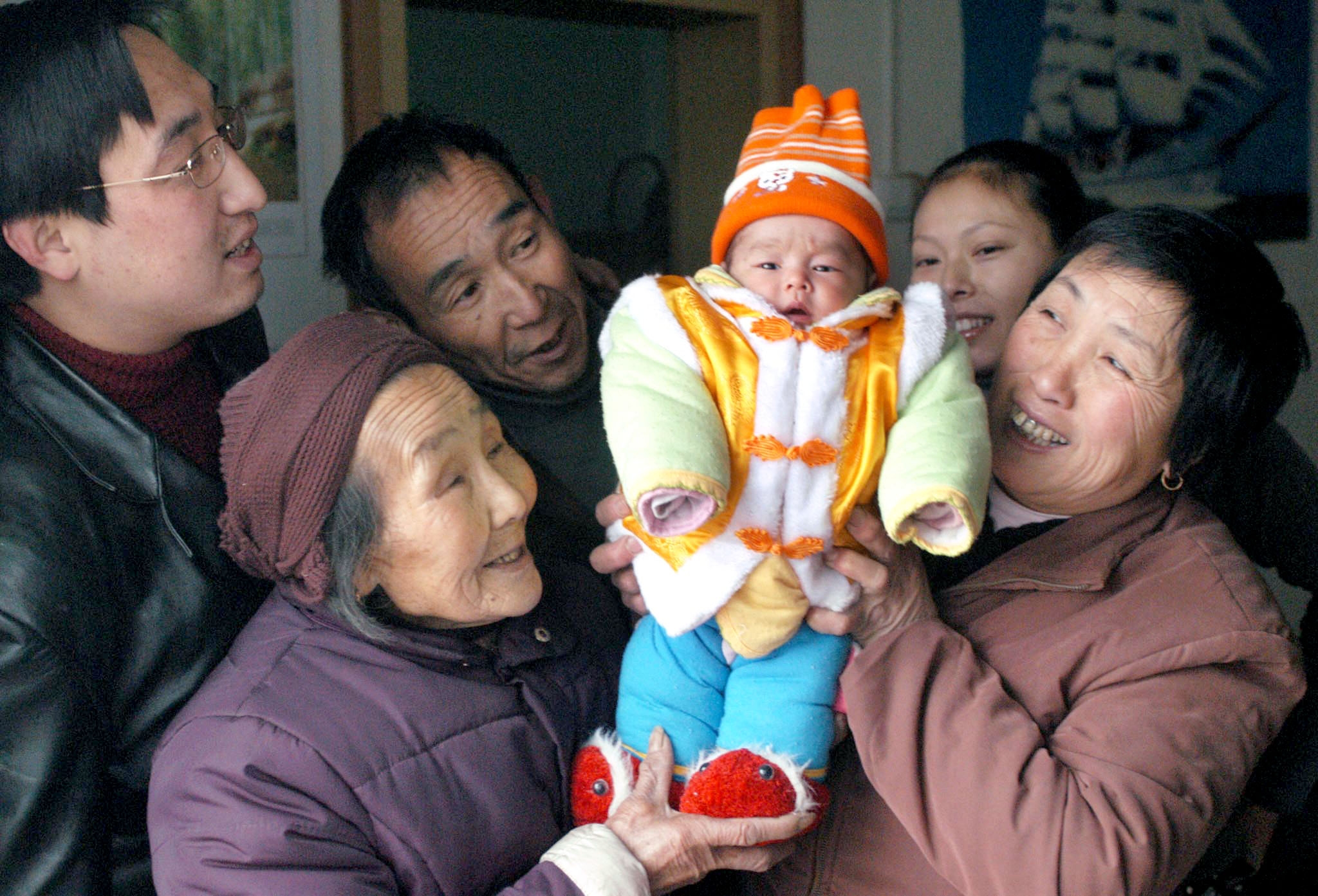 imagechina/picture-alliance/dpa All hopes rest on a son.

The People’s Republic of China is an authoritarian, omnipotent regime under the sole leadership of the Communist Party. The Party determines what becomes law and policy. Before the establishment of the People’s Republic in 1949, China’s population was kept within bounds by famines, natural disasters and wars. It was not until the economic upswing under Mao Tse Tung in the 1950s that the country experienced explosive population growth. As early as 1953, the economist Ma Yinchu saw it as the duty of the state to curb China’s sharply growing population. But Chairman Mao took a different view. Ma Yinchu was persecuted and not rehabilitated until 1979.

It was 1970 before the state saw a need to limit the number of births. Initially, however, it used education, not edicts to persuade families to have fewer children. And the policy worked. Between 1970 and 1980, the number of births per woman dropped from 6 to 2.5. Whether the fall was due to government information campaigns, female employment or declining infant mortality is unclear. What is certain is that the downturn in fertility was achieved without state coercion but was not considered sharp enough by the government.

On 1 September 1982, the 12th National Congress of the Communist Party declared family planning to be a “fundamental and immutable state policy” (jiben guoce). That declaration was then reinforced by the present Constitution adopted on 4 December 1982, which places obligations on both the state and parents. Article 25 says “The State promotes family planning so that population growth may fit the plans for economic and social development”. It stipulates that every birth should be sanctioned by the state – but it does not say how many births. Hence the repeated insistence today emphasizes that the relaxation of the one-child policy conflicts with neither the fundamental principle nor the mandatory character of the constitutional precept.

For nearly 20 years, the only basis in writing for the one-child policy was found, if at all, in local regulations and Party resolutions. The rules differed from one region to another. Now, the local guidelines have been reinforced and are official policy.

The Chinese government has no problem with the disharmony between national law and local regulations. When the national “Population and Family Planning Law” came into force in 2002, families in some areas were already allowed to have a second child – and had been for two years. By 2011, the majority of provinces had adopted a two-child rule; the last to sign up, in 2011, was the particularly populous and poor province of Henan. And this is despite the one-child rule having been enshrined in national law in 2002. Article 18 of the Population and Family Planning Law says: “The State maintains its current policy for reproduction, encouraging late marriage and childbearing and advocating one child per couple. Where the requirements specified by laws and regulations are met, the birth of a second child may be requested.”

Parents of only-children receive a certificate and other “rewards”; two-child families are supposed to remain the exception. Anyone having more children without permission faces a fine more or less equal to what the children’s education will cost the country. The fine does not bother China’s new rich. One case in the news recently involves the celebrated film director Zhang Yimou, who has been fined € 900,000 for his three children. In penalising him, the state shows that no one is above the law, no matter how rich or famous he is. The fact is, however, that only around 35 % of couples are affected by the one-child policy. And they are all urban dwellers, because the rule in rural areas is two children anyway.
The two-child policy was officially rolled out across the entire country by a Party Congress resolution adopted on 15 November 2013. There are two reasons for relaxing the rules: first of all, China is ageing faster than anticipated – nearly 15 % of the population is over 60 years old (2013) – and secondly, the state is not able to fulfil its promise of social insurance for all, so people in rural areas still have to rely on the family, i.e. on a son, to support them in old age.

The state’s rigid planning policy has been a success. Since the assumption of absolute control in 2002, the number of children per woman has fallen from 1.84 (1990) to 0.9. Population growth in China has been only marginal for years. In 2012, there were 1.35 billion Chinese. The international consensus is that the population will start to contract in 2017.

In practice, family planning by the state works like this: The government specifies a total number of authorised births for year X. That number is then divided among the provinces, which, in turn, assign quotas to municipalities and rural districts for further downward allocation to villages and work units, where public notices are put up. In recent years, for example, a village sign might read: Annual quota: two children. One to childless couple A because they are comparatively old (over 30) and one to couple B because their first child was a daughter and four years have passed since her birth (observance of statutory minimum spacing between births).

The state demands that a pregnancy outside the quota should be terminated. The relevant official’s chances of promotion generally depend on it. The task is crucial to a career in village government and is primarily assigned to men. Abortion is allowed or even mandatory in China for unauthorised pregnancies. If performed on an in-quota foetus on grounds of gender, however, it is a punishable offence. In rural China, all married women of child-bearing age are required to undergo quarterly medical examinations, which may be followed immediately by an abortion.

Prevention of pregnancy, in the regime’s eyes, is an even better way to control population growth. The state propagates the use of the IUD, which is a long-lasting form of birth control and cannot be removed by the woman herself. Male contraception in the form of condoms – a widely used option in Japan – has never been particularly encouraged in China because it cannot be externally monitored. Monitoring is also difficult in the case of the contraceptive pill – and a logistical challenge if its dispensation and use are to be ensured by specially assigned teams at local level. The state found that monitoring was necessary because, in rural areas at least, the one-child policy was rejected. In urban work units, observance was enforced by penalising the entire workforce: pay rates were reduced across the unit for every unauthorised pregnancy. Today, studies show that the one-child policy is accepted. For years, Shanghai has tried in vain to persuade young couples to have a second child. Many urban dwellers see even an only child as a major financial and time burden and do not want another.


Consequences of the surplus of males

According to the United Nations Population Fund (UNFPA), more boys than girls are being born in China. For every hundred females born, there are currently 119 males. In 2020, the country is expected to have a surplus of 40 million men of marrying age; in 2005, there were 25 million more men than women aged between 20 and 25. Because of the lack of young women, the practice of bride-buying is on the rise. Prosperous parents buy wives for their sons from poor rural provinces (Yunnan, Guizhou) or poorer neighbouring countries (Vietnam, Burma).
The main reason for the surplus of male infants is abortion of female foetuses. In many parts of rural China, lack of education means that a traditional mindset is more prevalent. In that mindset, a son’s role includes providing the primary support for his parents in old age while a daughter, when she marries, becomes part of her husband’s family. Women feel complete only after giving birth to a son and are prepared to risk even their own health for that.

Ultrasound scanners have been in use in China since the mid-1980s. Although prenatal gender determination is banned, mobile service providers operating mainly in rural areas use their equipment exclusively for that purpose. The gender of an unborn child cannot be reliably determined until around the 20th week of pregnancy, so a subsequent abortion at that late stage is risky for the woman. Studies show that the secure prospect of having a son reduces the total number of children that rural women have and also lowers the suicide rate among young women.

The state also discovered sterilisation as a long-term option for curbing fertility. On only one occasion in the Cultural Revolution was there a campaign for male sterilisation; otherwise, the sterilised parent has always been the woman. To meet campaign targets, sterilisation procedures may be performed directly after childbirth. As open-abdomen surgery, they are extremely dangerous for women and, in China at present, irreversible.

The reasons for the new two-child policy are purely economic: in the past, the Chinese economy could not afford more than one child per family. Now, the country needs more young people to support a large older population. It has what is known as a “1-2-4 problem”: the income of one young person has to support two parents and four grandparents. With the two-child policy, the pressure to have a son will only be switched from the second to a still-prohibited third child.

Theoretically, family planning policy provides the state with an instrument for raising the status of women in the family. One court ruling giving the woman – not her husband – the final say on a pregnancy is the only step that has been taken in that direction. But state family planning ignores the husband and takes even less interest in his parents, who often regard it as a daughter-in-law’s duty to give them a grandson and may even apply pressure or force to ensure that that duty is performed.