Developing countries have been subsidising fossil fuels for decades. Cutting such subsidies is difficult, but necessary because they are depleting public budgets, setting the wrong incentives and contributing to global warming. Many governments are afraid of triggering public protests, but recent experience shows that people accept reforms that are designed and implemented well.

contributed to D+C/E+Z in autumn 2014. He works for the Asian Development Bank’s Regional Sustainable Development Department. 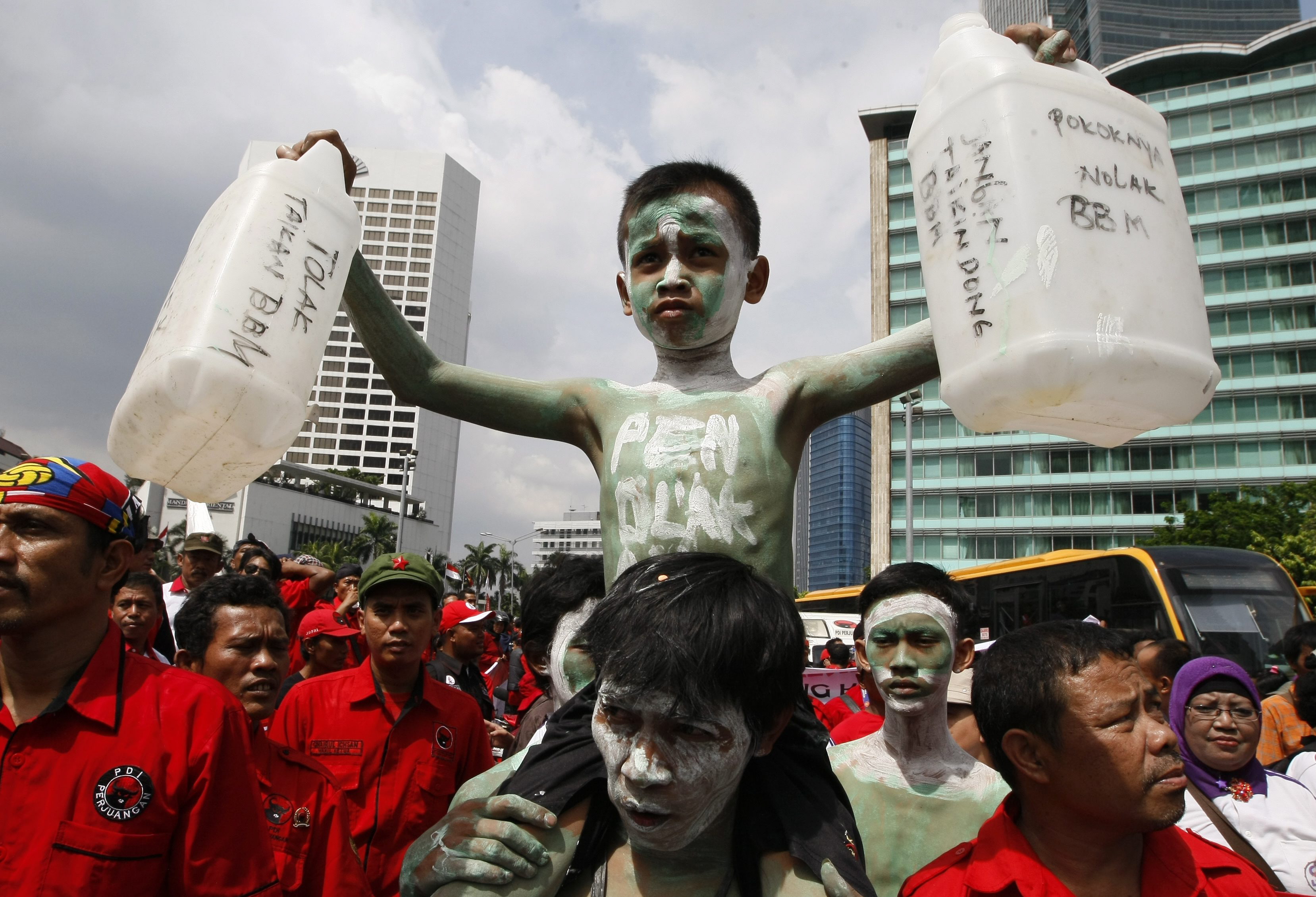 In 2009, G20 leaders pledged to phase out fossil-fuel subsidies. This was an historic commitment, but little action has been taken since. The main reason is probably that governments fear the public backlash.

Another challenge is that is no clarity on how much governments actually spend on fossil-fuel subsidies. In 2012, the total amount probably was at least $ 544 billion. In many developing countries, fuel subsidies exceed spending on social services and infrastructure. Accordingly, the subsidy costs are an issue in themselves. Making matters worse, the subsidies encourage the use of fossil fuels, which are the largest contributors to greenhouse-gas emissions. The International Energy Agency (IEA) reckons that the elimination of the subsidies would reduce global carbon emissions by six percent by 2020.

It would be helpful to know how many kinds of subsidies there are. Basically, any government action that lowers the prices that energy consumers pay for fossil fuels or electric power generated with fossil fuels is a subsidy. The same is true of any government action that raises the prices producers receive. Accordingly, there are many different kinds of subsidies, including tax breaks, giveaways, loans at favourable rates, price controls, purchase requirements and other things.

For decades, developing countries have subsidised fossil fuels. Many governments lower the prices of basic fuels in general. Others subsidise the use of fuel in agriculture or mining. Developed nations are also to blame. According to IEA estimates, the cost of government subsidies for fossil fuels increased from $ 311 billion in 2009 to $ 544 billion in 2012. If lost tax revenues are included, the figure rises to around $ 2 trillion per year. In 2012, that was equivalent to more than eight percent of global government revenues, according to the International Monetary Fund.

In any case, governments must become more transparent. They must stop hiding hand outs to oil, gas and coal industries as well as to agriculture sector. Some countries may choose to retain some fossil fuel subsidies that they deem useful. If they do so, however, they should inform the public in a way that allows people to thoroughly assess whether their decision makes sense.

All too often, energy subsidies do not make sense. The irony is that they neither lead to energy security nor serve other development objectives they are supposed to promote. Instead, they block action on climate change. They are obviously incentives to waste energy, neglect fuel efficiency and not to invest in renewables. The result is a huge misallocation of resources.

There is more misallocation, however, since the subsidies compete with public spending on infrastructure, health care, education, water supply, sanitation and other things that governments should prioritise. Cheap energy, moreover, is an incentive for the growth of heavy industries, whereas it would make more sense in developmental terms to develop light manufacturing, which generates more employment.

Finally, energy subsidies stifle private investment in the energy sector itself. Small and mid-sized enterprises cannot compete with low, government-subsidised prices. At the same time, only very few governments of particularly resource-rich nations can provide cheap power to their entire population. The subsidies thus split nations into those that benefit and those who do not. Many rural areas remain disconnected form national power grids. Matters would improve thanks to private-sector investments if subsidies would not distort prices.

Many countries introduced fuel subsidies to protect consumers and keep prices low for the poor. Oil-producing countries in the Middle-east and Southeast Asia, for instance, saw subsidies as a way to share their resource wealth with the citizens. While the intentions may seem benign, the truth is that fuel subsidies tend to favour the rich much more than the poor because the former use much more energy than the latter. Many poor people cannot afford motor scooters, have no access to electricity and still rely on traditional fuels such as firewood and dung. Again, rural areas are negatively affected in particular.

Whatever fuel subsidies are supposed to achieve, they always deplete government budgets. Smuggling is only a minor public-finance challenge they cause. A much greater worry is sovereign debt. Generating additional government revenue is always a huge challenge because taxes are never popular. To the extent that energy is imported, subsidies hurt a nation’s trade balance because they invite its people to use more fuel.

Some developing countries have realised that energy subsidies are not sustainable and have sought to trim them back. Subsidies have become increasingly unaffordable as global oil prices have more than doubled between 2009 and 2013. In the past two years, India, Jordan, Morocco, Indonesia, Iran, Malaysia and Vietnam have all cut subsidies and raised fuel prices. Thailand is examining the options. Even oil-rich Kuwait has announced plans to scrap diesel subsidies.


How to manage reform

Reform is necessary, but not easy. Politicians have reason to fear antagonising the public and especially the urban elite when they remove subsidies. Cuts affect the citizens, and most of them do not expect to get any benefits from the policy. Protests and even riots occur when subsidy reductions are announced. In view of such opposition, governments often shy away from implementing sensible policies.

The difficulties can be overcome however. Experience shows that subsidy cuts can go well. For that to happen, governments must raise awareness for what they are doing in well-designed public-education programmes. They also need a clear timetable for gradual price increases. It helps, moreover, to introduce targeted transfers that help poor people to cope with rising energy prices.

The Philippines have set a good example. Today, the country does not subsidise fossil fuels any more. The government undertook energy reforms after holding stakeholder discussions across the country, involving the general public, industries, agriculture and commerce in the debate. Energy subsidies were then reduced gradually and finally phased out entirely over a period of five years.

The Philippines are especially exposed to the impacts of climate change. Typhoons wreak havoc again and again, and people have become keenly aware of global warming. Such awareness has certainly supported reform, but it would be wrong to believe that reform would otherwise have been impossible. Climate change is an important reason to phase out fossil fuels, but it definitely is not the only reason.

Malaysia has launched a programme that is similar to the one implemented in the Philippines. Today, bill boards around the country provide information on how much the government spends on petroleum products, rice, flour, cooking oil et cetera. The general message is that the fuel subsidies are becoming a burden and that the prices will have to rise gradually. Such early awareness raising helps people to prepare for change and adjust their consumption habits by switching to more efficient choices. In view of climate change, governments will have to stop subsidising pollution. They will have to implement policies of carbon pricing that charge people and companies for the greenhouse-gases they emit. The People’s Republic of China (PRC) and the Republic of Korea are both considering the introduction of a cap on carbon emissions by putting a price on carbon by 2016. The PRC is looking at capping coal consumption in 2016. Such policies will raise public revenue, enabling governments to spend more on clean, expensive and yet-to-be developed technologies, such as carbon capture and storage.

Fossil-fuel subsidies are harmful for several reasons. They crowd out other, potentially more important kinds of government spending, they provide the wrong economic incentives, and they contribute to climate change. Moreover, they compound inequality rather than help to reduce poverty.

By scrapping fuel subsidies, many countries would almost immediately reach their carbon-reduction targets for the next decade, according to the IEA. In the long run, such reforms would boost economic efficiency and free up government spending for more sustainable pro-growth policies, for example, in the education sectors.

Subsidies cannot be abolished overnight however. Public opinion across the world is hostile to rising energy prices. In the Philippines, it took five years of gradual reductions to ultimately eliminate the subsidies. This incremental policy was accepted by the public. The example proves that it is makes sense to start reducing subsidies soon rather than to wait for problems to pile up even more and eventually force a government to take more radical and politically much more difficult measures.