Revolt of the masses

Chileans voted overwhelmingly to rewrite their Pinochet-era constitution by means of a drafting assembly elected directly by the people. Now the hard work begins. 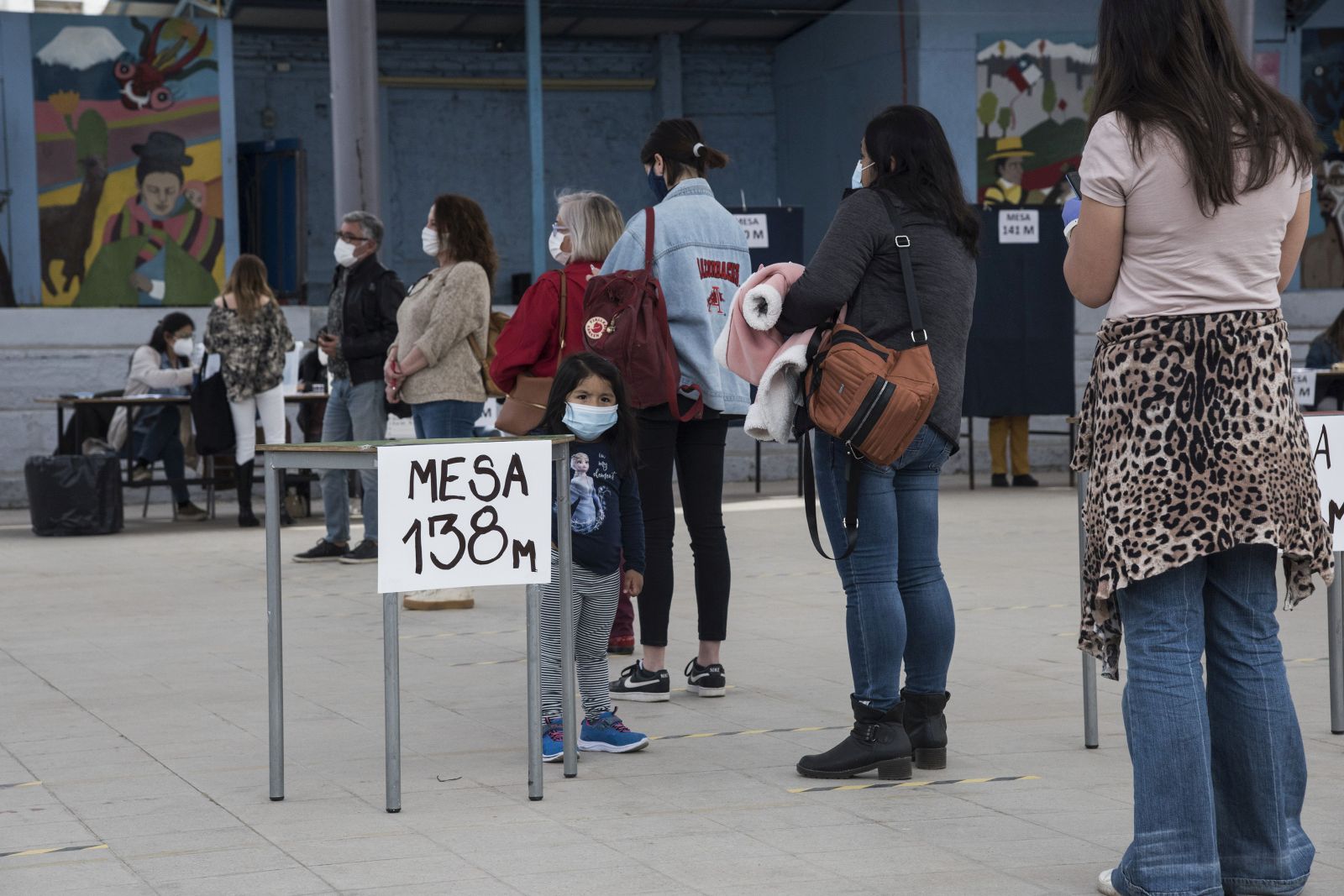 Olivares/picture-alliance/AA People voted in spite of the pandemic.

As the world watched in fascination, many thousands of jubilant Chileans poured into the streets on the night of 25 October to celebrate a landslide vote to rewrite their country’s constitution.

Not only did Chileans vote overwhelmingly to revise the constitution drafted during the era of dictator Augusto Pinochet (1973–1990), who built market-competitive principles into the document; they also voted to do so via a drafting group elected directly by the people, without the participation of established politicians.

The landslide vote for reform aims to produce a constitution with greater emphasis on principles of social equality and perhaps less emphasis on principles of free-market competition. The reformers’ victory was all the more impressive as it took place against the backdrop of the Covid-19 health crisis, which has caused substantial damage to Chileans’ health, finances and general well-being.

To understand how and why Chile, one of the region’s most stable countries, reached this point, one must go back a year in time – in particular to 18 October 2019.

That day, after several days of protests by high school students against a fare increase on the Santiago Metro system, thousands of people took to the streets to protest more generally against constant increases in living costs and a lack of protection for the vulnerable. The uprising was spontaneous and sometimes turned violent.

It involved clashes with police, looting, and burning of 20 Metro stations in Santiago. The protests were fuelled by a generalised rage that took many by surprise. Yet signs of rising discontent had been visible for decades.

Since 2006, Chile had seen several uprisings. Separate demonstrations by students, retirees, women and environmentalists objected to deep inequality. Cases of illegal financing of political campaigns sparked further protests, as did corporate plots to manipulate the prices of medicines, food and even paper.

Against this backdrop, the fare hike in Santiago was for many Chileans one insult too many. The price hike itself was only 30 Chilean pesos, equivalent to about €0.03 per ticket. But those three cents – imposed by a political class perceived to be indifferent to the poor – were enough to produce an explosion of rage.

Interestingly, the general uprising of October 2019 did not issue specific demands, nor did it designate a single spokesperson. The uprising was largely unorganised, drawing its power directly from the people rather than from any political party.

Emmanuelle Barozet, a sociologist at the University of Chile’s Center for Conflict and Social Cohesion, says the revolt is “a diverse movement, like others in the world. If you talk to the demonstrators, it is easier to know who they are against than what they really want”.

Nonetheless, the reform movement spread throughout Chile, sparking simultaneous protests in 15 cities within a few months. Protesters in different cities voiced similar concerns, using slogans such as “Chile has awakened”, “the people demand dignity”, and “it’s not about 30 pesos, it’s about 30 years” (putting the mass-transit fare hike into the context of 30 years of austerity).

Protesters also shared unease about human-rights violations. During a year of unrest, more than 30 people lost their lives according to numbers from the National Prosecutor’s Office. Chile’s National Institute of Human Rights has recorded more than 3,000 human-rights violations since 18 October 2019. Some 163 people suffered eye trauma, of whom 32 have lost sight, as a result of the police shooting pellets into people’s faces.

Repressive police tactics did not dampen the protests. On the contrary, they galvanised opposition to President Sebastián Piñera, a conservative businessman, and to the entire political class. As the protests continued, the street cry of “resignation”, directed at the president, became a threat to the executive branch. The president’s position was further weakened when military leaders started resisting sending troops to quell demonstrations.

As the clashes continued, in the early hours of 15 November 2019 representatives of the various factions proposed a way forward: the creation of a new constitution. That process would be kick-started by a referendum on whether Chileans want a new constitution and, if so, who would draft it.

This proposal was a bold gamble for both sides. It won the president a respite from demands for his resignation. But it also required him to put the constitution – the Pinochet regime’s most important legacy – in play. In 1980, it was approved by a government notorious for human-rights violations. It has a clear bias towards market competition. So, for example, in areas such as health care and education the constitution guarantees the right to choose among competing providers but does not guarantee access to these services. The water sector too is marked  by excessive reliance on market dynamics (see Katie Cashman in Focus section of D+C/E+Z e-paper 2020/06). The current constitution generally makes the state the aid-provider of last resort.

Moreover, the current constitution requires a special, qualified quorum to approve amendments. In practice, this provision makes it impossible to amend the constitution through legislation. As a result the document has remained unchanged over the years, through successive Social Christian, Socialist and Conservative governments. Thus, although democratic Chile said goodbye to Pinochet in 1990, it kept his institutional design and model of society.

The collective memory of Chileans initially caused some protestors to mistrust the constitutional-reform proposal. But in the end a sense of opportunity prevailed and most members of the diverse coalition of protesters approved this approach. As the 25 October 2020 referendum approached, nearly everyone agreed on putting this issue to a public vote.

Democracy amidst a pandemic

But nearly everyone also failed to foresee the devastation that Covid-19 would cause in Chile. Quarantines, contagion and a crisis of unemployment forced the postponement of the referendum from April 2020 to October. Thousands of deaths threatened to slow the momentum and undermine the progress made.

In this environment, proceeding with the referendum became a test of determination: Were Chileans still committed to meeting the challenge of social reform, or would they be more focused on surviving the Covid-19 emergency?

They were indeed committed. Over 7.5 million Chileans – half the eligible electorate – turned out to vote on 25th October. That was almost a million more than in the last presidential election. Chileans voted with a 78 % majority to rewrite the constitution, and with a 79 % majority to have the drafting done by directly-elected citizens, without members of parliament involved.

After the vote, there was little time to celebrate. Discussions began almost immediately on the composition of the drafting assembly. Some commentators worried that the assembly would become a power centre that challenges the authority of the national Congress.

Others, such as Teachers’ Union President Mario Aguilar Arévalo, worried that the drafting group might come under the influence of political parties, thereby undercutting its own legitimacy. “It is important to keep up the pressure” for reform, he says.

One landmark agreement already reached is to elect a gender-balanced assembly, with 50 % women. That would make this the first gender-balanced constitutional drafting group in history. Discussions are also under way about setting minimum quotas for native peoples in the group, and about ensuring representation of independents unaffiliated with political parties.

Paulina Astroza, a lawyer and member of a network of independent voters, says that participation of non-partisan drafters will help to ensure a focus on the voters’ wishes. “If we want a constitution that reflects the demands of society, the independents must be involved,” she says.

In short, despite their massive victory, the reformers have a lot of work ahead. The next step is a referendum, set for April 2021, to elect drafting-group members. The elected drafters will then have a year to do their work. In August 2022 Chileans will vote in another referendum on whether they agree with the text created.

Meanwhile, as the violent protests of the past year die down, the streets are filled with citizens wearing masks and carrying hand sanitisers instead of placards. Due to Coronavirus, the immediate challenge has shifted. But the determination is the same.

Javier A. Cisterna Figueroa is a journalist and lives in Concepción.
cisternafigueroa@gmail.com