Politics and religion are closely intertwined in Brazil. When Jair Bolsonaro was campaigning for the presidency, he enjoyed strong support from Evangelical Christians. Many Catholics voted for him as well. As head of state, he uses his ambiguous religious identity to build a broad constituency and is exacerbating divisions within the Catholic church. 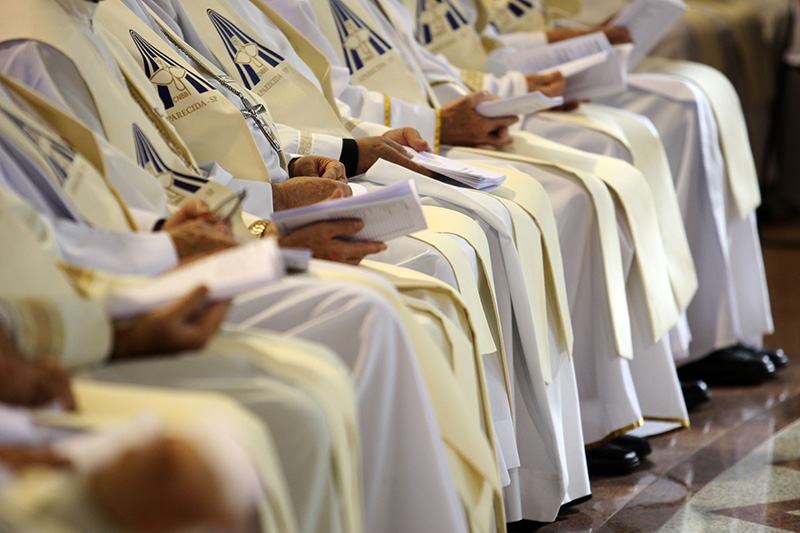 Lessa/picture-alliance/ESTADAO CONTEUDO Bishops take part in a service in 2012 celebrating the 50th General Assembly of the National Conference of Brazilian Bishops.

During the presidential election last year, Bolsonaro’s approval ratings were much higher among members of Brazil’s free and Pentecostal churches than among the general population. Catholics were also drawn to the right-wing populist, though to a far lesser degree. Bolsonaro won the second-round vote with a good 55 % against Fernando Haddad of the Workers’ Party.

Bolsonaro was raised a Catholic, and is registered as such with the Superior Electoral Court, but he later had himself baptised by a Pentecostal church whose services he also regularly attends. His wife and children are Evangelicals too.

Bolsonaro’s victory cannot simply be explained by his religious affiliations. He was also elected by a large majority of people in the south and of the educated and higher-earning people. Even about 30 % of LGBTI people, who diverge from heterosexual norms, and almost half of Afro-Brazilians voted for Bolsonaro, even though he vilifies both sexual and ethnic minorities.

Moreover, an analysis of the distribution of votes must take into account the crisis that the country is experiencing. It has permeated society as a whole. The people attribute this crisis to corruption and previous administrations headed by the Workers’ Party. During the campaign, Bolsonaro managed to position himself as the antithesis to the “old politics”.

Nevertheless, the support of the Pentecostal churches is important (see my contribution in D+C/E+Z 2013/05), and Bolsonaro has always had them on his radar. In speeches, for example, he regularly quotes from the Bible. Three years ago, he and his three sons, Flavio, Carlos and Eduardo, had themselves baptised in the waters of the Jordan River in north-eastern Israel. The sons play important roles in politics.

For sociologist Christina Vital of the Fluminense Federal University (Universidade Federal Fluminense – UFF), this baptism was not simply an expression of Evangelical conversion. She recognises it as an attempt by the Bolsonaros to create an ambiguous religious identity for themselves. She says that the president presents “himself as a Catholic, but is married to an Evangelical and was baptised in the waters of the Jordan”. In Vital’s eyes, the head of state is claiming a “divine mission” because he was able to achieve such prominence despite his declared personal “insignificance”.

In a recently published study, Vital showed that, there was an increase of candidates who are officially Catholic but received major support from evangelicals in the latest elections. She calls these politicians “allies of Evangelicals” (Aliados dos Evangélicos – ADE). In addition to Bolsonaro, this group includes the governor of Rio de Janeiro, Wilson Witzel.

According to Vital, the steady growth of Evangelical churches is a phenomenon that extends beyond religion: “It is expanding simultaneously in society and in centres of power like the media and among politicians at the federal, state and municipal level.” The next step, she says, will be to reconfigure the judiciary to conform with Evangelical ideas. “That is not a vision for the future. It is happening now,” Vital argues.

In early July, Bolsonaro invited Evangelical senators and representatives, who form their own cross-party block in Parliament, to a breakfast at the Planalto Palace, his official workplace. The meeting took place on the day after the first vote on pension reform, during which these senators and representatives demonstrated their full support of the president. At the breakfast, Bolsonaro promised to nominate a “super Evangelical” justice to the Supreme Court.

Around 166 million of Brazil’s 210 million people claim to be religious. “Whether they are Catholic or Protestant, most religious people in Brazil are conservative,” says Vital. Not all conservatives support authoritarianism, she explains, but many long for a return to social norms, the loss of which they blame on a leftist social agenda of protecting minorities and promoting diversity. According to Evangelicals, this agenda contradicts family values.

Conservatives see Bolsonaro as a defender of traditional norms. But whereas, for example, the influential Universal Church of the Kingdom of God (Igreja Universal do Reino de Deus – Iurd), with its founder, Edir Macedo, the owner of a media empire, at the head, openly appealed for support of Bolsonaro, the Catholic Conference of Brazilian Bishops (Conferência Nacional dos Bispos do Brasil – CNBB) did not take a clear position. Its former president, Cardinal Sérgio da Rocha, said in early 2018 that Catholics should not support any candidate “who promotes violence and calls for solutions that could further exacerbate conflicts in Brazil”. However, shortly thereafter the bishops published a declaration that made clear that the CNBB would not take a position on the presidential candidates.

On the other hand, Orani Tempesta, the Archbishop of Rio de Janeiro, received Bolsonaro in October of last year ten days before the second-round vote. At that meeting, the presidential candidate promised “to defend the family, the innocence of the child in the classroom and religious freedom”. He said he would fight against abortion and the legalisation of drugs.

That message was well received by conservative Catholics. The fact that he ultimately won a particularly large share of votes from this camp highlights the divisions within the Brazilian Catholic Church. The journalist Mauro Lopes wrote in an essay that the CNBB is maintaining a precarious balance: “Even though its leadership is oriented towards Pope Francis, it avoids any confrontation with powerful fundamentalists.” The Pope, originally from Argentina, is a champion of the poor and social justice. He has also addressed the global climate emergency, which Bolsonaro denies.

Lopes also points out that former President Lula da Silva is Catholic. “But so far no bishop or CNBB delegation has visited him in Curitiba prison.” He is serving a sentence for corruption. At the end of May, Pope Francis sent Lula a letter in which he wrote that, thanks to “the triumph of Jesus over death”, people should believe that “in the end, good will overcome evil, truth will overcome lies and salvation will overcome condemnation”.

At the beginning of May, Walmor Oliveira de Azevedo, the Archbishop of Belo Horizonte, was selected to be the new president of the Conference of Brazilian Bishops. His election is seen as a repudiation of the CNBB’s widely anticipated shift to the right: the 65-year-old cardinal is considered a moderate and agrees with Pope Francis on many points.

The latter recently made himself unpopular among Bolsonaro supporters by convening a seminar to discuss the problems in the Amazon region. It is scheduled to take place from 6 to 27 October in Rome. According to a report by the newspaper O Estado de S. Paulo, the head of Brazil’s secret service (Agência Brasileira de Inteligência – Abin), General Augusto Heleno, described the Amazon synod as “an interference in the internal affairs of Brazil” and said that “some of the items on this agenda are matters of national security”. The government clearly feels that its national sovereignty in the region is under attack.

According to the same newspaper article, Heleno characterised the CNBB as a “potential opponent”. Members of the government believe that the Brazilian bishops who are planning to attend the meeting in the Vatican are left-wing. As early as 2018, Bolsonaro said that the CNBB belongs to the “rotten part of the Catholic Church”.

Carlos Albuquerque works for Deutsche Welle’s Brazilian programme and is based in Bonn.
carlos.albuquerque@gmx.net