Due to its fertile soil and abundant resources, Sierra Leone is actually a rich country, where better living, housing and working conditions could easily be achieved for the vast majority of people. However, diamond, rutile, gold and other mining activities have only served the interests of a small elite. The agreements concluded between the government and private-sector companies have largely freed the latter from any sense of social responsibility. Results include massive exploitation, environmental damage, expropriations and evictions.

last contributed to D+C/E+Z in spring of 2020 as health adviser with medico international in Frankfurt. 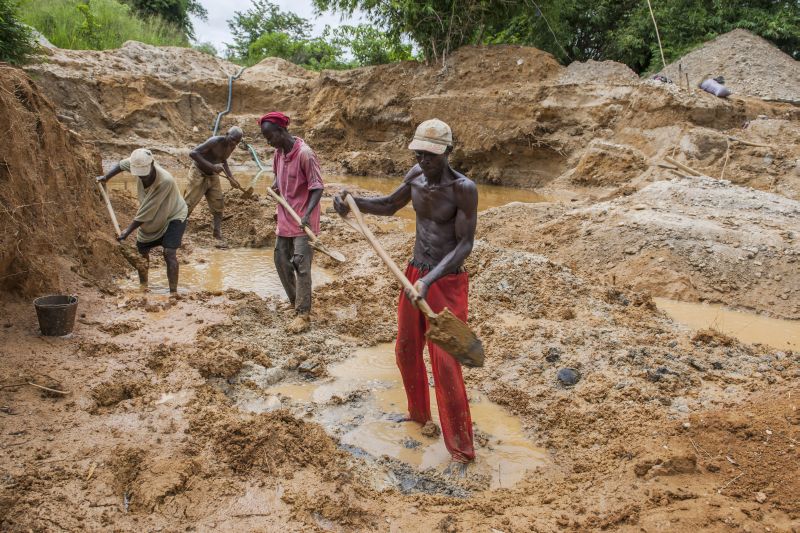 Graben/Lineair Extractive industries have not improved living conditions for the majority of people: a diamond mine in eastern Sierra Leone.

By granting tax breaks to the mining companies and selling large tracts of land, the government has deprived itself of strong sources of revenue and thus undermined its own ability to ensure universal access to health care and education. In 2012, the tax incentives for mining companies were 15 times greater than the budgets for health care and education (Natural Resource Watch 2014). Land grabs plunge herders, small farmers, fishermen, agricultural workers and nomads into poverty by denying them vital access to land and water.

In recent years, Sierra Leone has experienced a huge economic boom, fuelled significantly by revenues from the extractive sector. Even though many in the country have profited from the improvements in transport infrastructure and power supply, the standard of living is still as precarious for the majority of the people as it was in the time after the civil war. State institutions have not strengthened in the course of the economic boom, and corruption – the abuse of public office for private gains – has become worse.

In 2013, the country’s gross domestic product grew by a hefty 20 %. Because of the Ebola epidemic and a global fall in commodity prices, it shrank by the same rate in 2015. Other countries’ response to the health crises compounded that economic disaster. “The countries affected by Ebola were forced into total economic and political isolation,” says Laurie Garrett, a science journalist. Because of the Ebola outbreak, 40 countries unilaterally imposed travel restrictions in spite of a categorical recommendation of the World Health Organization (WHO) not to do so. British Airways stopped flights to the region, and other airlines followed suit. These measures breached the binding WHO rules on trade and travel in the event of an epidemic and made the work of the aid agencies much more difficult. Regional and international trade relations collapsed, in some places food prices doubled. Sierra Leone’s extractive sector, which was already hurt by low iron ore prices, went into free fall.