The government of Burkina Faso under President Blaise Compaoré has started a process of devolving government powers to regions and municipal authorities. The idea is that administration and governance will improve once more responsibility is taken at the local level. However, the people do not trust politicians at any level of government, and many politicians are indeed corrupt, rig elections manipulatively exploit their interaction with traditional authorities.

last contributed to D+C/E+Z in spring 2013 as a PhD student in political science at the University of Freiburg. 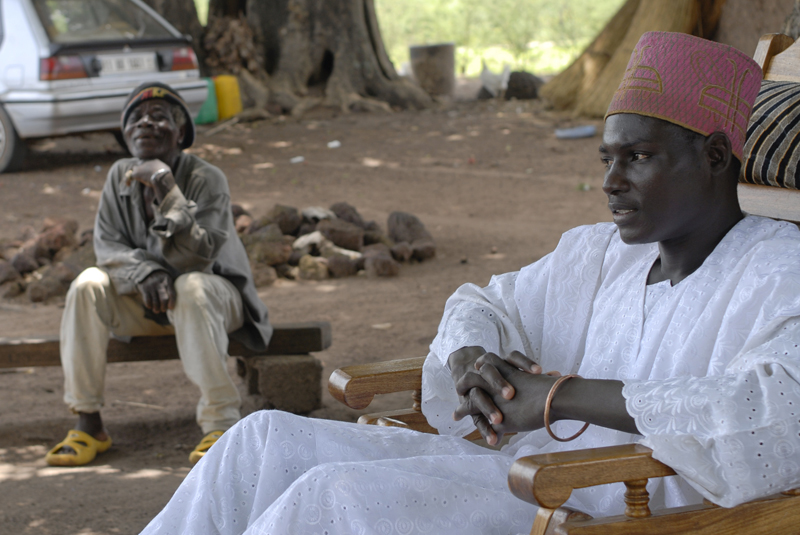 Jörg Böthling/Fotografie Traditional authorities matter: King Kamou Battou of the Gha, a small ethnic group that accounts for about eight percent of Burkina Faso’s population, in 2008.

In the early 1990s, many African nations switched from authoritarian rule to formal democracy. Burkina Faso under President Blaise Compaoré was one of them. The guiding principles at the time were good governance, democratic administration and civic participation. To achieve these things, some political power was to be transferred to the regional and local levels.

Burkina’s devolution policy was re-drafted several times, but, for several reasons, authority and resources were never effectively transferred to local authorities. Like many other African nations, Burkina Faso has a semi-authoritarian regime today. Freedom House, the independent organisation dedicated to promoting democracy, indicates its status as a “partly free” country, alternatively speaking of a “hybrid regime”.

The country is no longer a dictatorship, but it is not a democracy yet either. The powers that be, allow independent organisations and opposition parties to be formed and become active, and they grant freedom of the press. At the same time, however, they prevent fair political competition by illegal means. For example, the ruling parties use state logistics, money and staff in election campaigns. Intimidation of the opposition is common, and manipulation of voters’ lists is another strategy the ruling party Congrès pour la Démocratie et le Progrès (CDP) uses. It has a considerable amount of money and is present throughout the country. It won 12,000 of the 18,000 local council seats in the last local government elections in December 2012.

As is typical of centralistic states, the national government of Burkina Faso worries about handing over political responsibilities and budget funds to sub-national levels of government, and giving up some of its own power accordingly. The political system still has strong centralistic features.

This has an effect on the implementation of the devolution policy. In practice, what we are seeing today is “hybrid decentralisation”.  Bodies for local self-government have been created, but the central government retains many rights of control and approval. For example, the ministry in charge of devolution has given itself the authority to remove elected mayors from office, if it suspects them of fraud or abuse of their official position.

The regional policy level is virtually meaningless. Certainly, regional councils have been elected, and they are headed by persons with democratic legitimacy. The problem is that they have not been assigned any real tasks, so their role is purely representative.

Corruption and repeated abuse of power have made local communities lose trust in the state. The people have no faith in the devolution policy either. Most Burkinabè do not believe that the current government is in a position to improve their living standards.

In contrast, the traditional authorities (kings and nobles) of the country’s various ethnic groups enjoy great respect. They personify their respective people’s customs, traditions, rituals, life experience and wisdom – in short everything that constitutes their essence of life.

In February 2009, the Centre pour la Gouvernance Démocratique, a civil-society organisation, released a study showing that the traditional authorities in Burkina Faso have real social power. At the grassroots level, people value them as bearers of old values and representatives of their culture. They should therefore be given a say in the process of decentralisation in Burkina Faso. To date, however, the state has failed to involve traditional authorities in political reform agendas.

Relations between the government and the traditional leaders of the various ethnic groups have always been difficult. The constitution does not recognise traditional authorities. The government does not want traditional societal structures to be reflected in legislation, arguing that all ethnic groups should be equal and that drafting laws that suit specific groups, but not the entire population, would undermine that principle.

The role of the traditional authorities in politics is indeed complex and often ambiguous. In principle, these leaders should represent their entire communities, and they should not serve party interests.  In many cases, however, traditional leaders promote a particular party or even run for political offices, such as mayor for instance. Others are drawn into party politics, by accepting bribes and getting their supporters to vote for a particular party. As a result, many traditional leaders have lost their credibility, with harsh consequences for the social cohesion of their traditional communities as well as for the effective implementation of devolution.

The state is wrong to exclude the traditional leaders. Unless they are involved in a meaningful way, it will be impossible to anchor the decentralisation process in the minds of the people.

There are further problems with devolving powers to the municipal level. Local politicians themselves often undermine trust in reforms, because they behave just like top-ranking politicians. Corruption is widespread, and so are election rigging and fraud. As a result, people do not trust the local politicians either. All too often, municipal agencies have become something like self-service stores for the local elite. Spectacular scandals as occurred in Gaoua in south-western Burkina Faso in May 2008 remain exceptions however.

In Gaoua, the local people accused the mayor, who had been elected two years earlier, of abuse of office, alleging that he had illegally sold municipal land, misappropriated public funds and personally enriched himself. Suspicions arose when the local government introduced new local taxes, but its financial situation did not improve. A police investigation later confirmed the suspicions. In this case, local citizens held a protest march, which forced the head of their municipality to resign.

Sadly, this is a one-off occurrence in the history of municipal self-government in Burkina Faso. Democratic awareness is generally still not very developed and public outrage at misuse of authority is very unusual.

Elections, moreover, often do not deserve to be called elections. People who vote tend to do so not because of a political conviction or a desire to exercise a fundamental civic right, but rather because they get something in return. Politicians buy votes with cash and non-monetary gifts such as t-shirts or packets of sugar or tea. There are sociological and economic reasons for people’s receptiveness to election bribes. The majority of Burkina’s people suffers poverty, illiteracy and a lack of political and civic education.

For these reasons, participation remains low in elections and municipal politics in general. It adds to the problem that women have virtually no involvement in political life, and there is no female emancipation movement. However, without active citizenship, state institutions cannot become transparent and democratic control will stay impossible. Under these conditions, decentralisation cannot succeed either.

Aristide Tiendrebeogo is a PhD student in political science at the University of Freiburg.
aristiend@yahoo.fr