In January 2008, an innovative civil society initiative was started in the Namibian village of Otjivero. It paid a basic income grant to all residents with financial backing from Germany. The aim was to demonstrate how poverty and high levels of inequality can be reduced. The project was not evaluated diligently, however, so it did not serve as a valid pilot scheme. Its impacts remain unclear, but are certainly unsustainable. 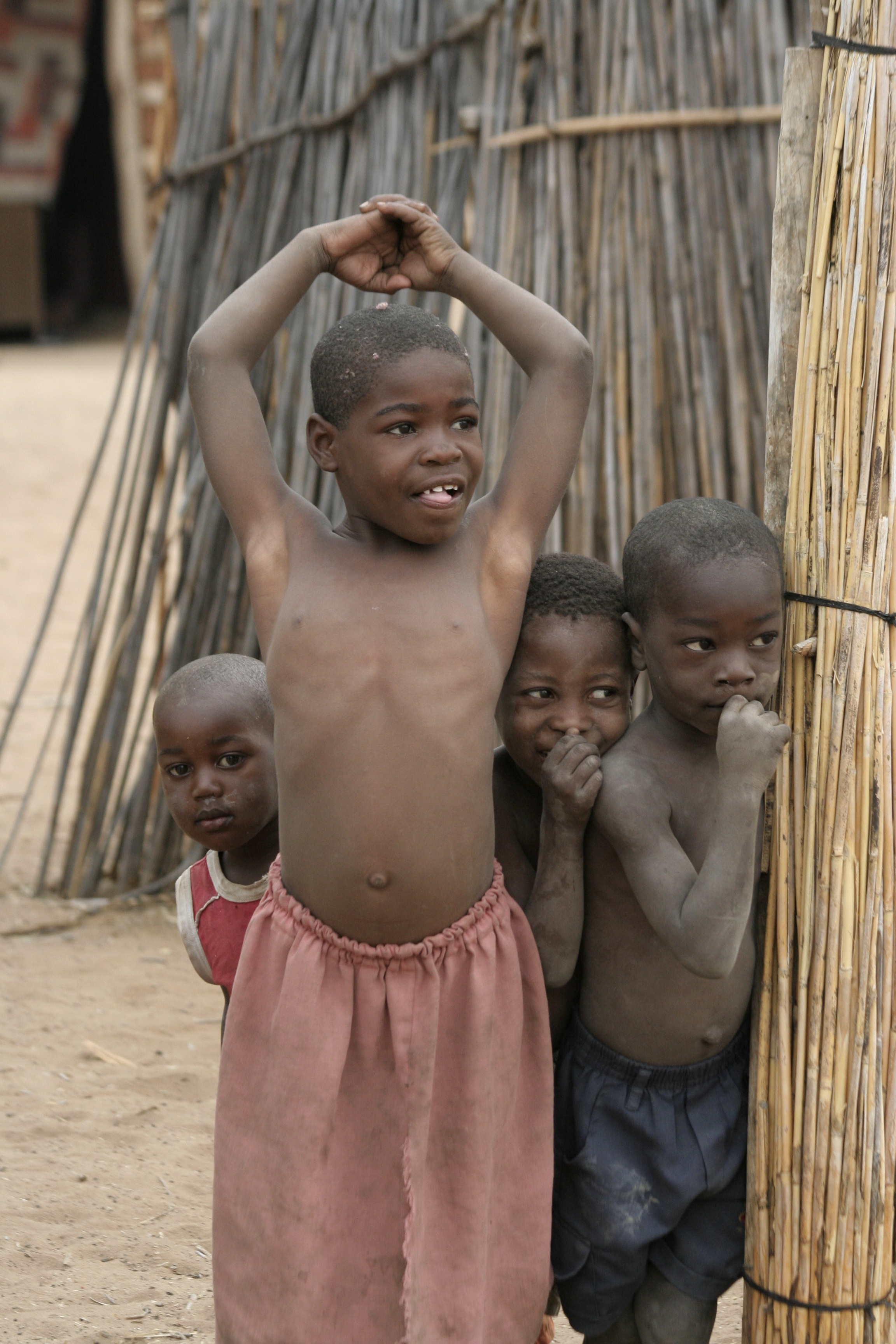 Sean Sprague/Lineair Advocates for the guaranteed basic income say that it will result in higher levels of school attendance.

In 2005, an alliance of churches, trade unions and civil-society orga­nisations formed the Basic Income Grant Coalition in Namibia, following the South African model. The Coalition wanted to convince the government of Namibia that introducing a basic income grant (BIG) throughout the country would reduce poverty and ease the high level of inequality.

Non-governmental organisations (NGOs) argued that a basic income grant can empower and motivate people to take up an economic activity. On top of that, they expected the BIG to result in social infrastructures being made more use of since schools and health-care providers charge fees in Namibia. The BIG Coalition said that the taxes needed to fund the initiative would not overburden the economy because the basic income grant would increase purchasing power and thereby accelerate growth. The government rejected the proposal however.

In 2008, the BIG Coalition launched a pilot project in the village of Otjivero, 100 kilometres east of the capital Windhoek, to test its ideas. In the first two years, they paid a monthly amount of 100 Namibian dollars (about € 10) to each of the village’s 1,000 to 1,200 residents with the exception of those who get pension payments from the state. Funding was provided by the United Protestant Mission (VEM) in Wuppertal, the Friedrich Ebert Foundation (FES) and two Protestant churches in North Rhine-Westphalia. Germany’s Federal Ministry for Economic Cooperation and Development (BMZ) contributed indirectly to the project because it provides funding to the FES and the two churches. However, it did not have any influence on the project itself.

The Namibian government appre­ciated the project which cost it nothing. It remained unconvinced however. A senior officer criticised the BIG initiators on several occasions for not having designed their model on the basis of an analysis of the shortcomings and loopholes of Namibia’s social-security system.

After two years, the project was continued, but the grant was reduced to 80 Namibian dollars. Institutional support gradually ran out, so the project became increasingly dependent on private donations, mostly from Germany. Payments to villagers became ever more sporadic in the course of 2012. The project managers say that they made the last such cash transfer in September 2012.

After the first year, the project team initially assessed the project’s impact in very favourable terms. The number of underweight children was said to have fallen considerably because of the basic income grant. According to the figures, school attendance rose, and so did attendance at the local health clinic. The BIG Coalition reported that a number of people living in Otjivero, encouraged by the cash transfer, had started small businesses as bakers, tailors and brick layers.

According to the BIG promoters’ calculations, the per capita income (minus the BIG payments) increased by 29 % in 2008, and a sample of households supposedly revealed a private savings rate of 38 %. The BIG supporters concluded that popular prejudices against the basic income grant were proven wrong, at least in Namibia, since the BIG has not made people “lazy”, but rather had led to socially desirable behaviour and even motivated recipients to become economically active.

However, the question arises whether these claims are plausible. In a single year, an economic growth of 29 % would be three times the rate of China (and is supposed to be sustainable on top of that). According to the World Bank, Namibia’s national growth rate averaged a mere 4.4 % from 2000 to 2008, and GDP even declined slightly in 2009. The extremely high savings rate that was indicated is similarly hard to believe, given that the households concerned are quite poor.

The figures on the reduction of hunger and the improvements in children’s weight are also astonishing in a just six months period. This was all the more so as the monthly expenditure on food is supposed to have gone up by only 15 Namibian dollars per person after the BIG was introduced.

If these figures were correct, by the way, they would amount to a valid argument against continuing support for the village. After two or three years, the money would have been better invested in providing other villages with an economic and social stimulus.

The project management has unfortunately declined to make its data publicly available, saying that the privacy of the villagers must be protected. However, the international standard for poverty-ori­ented projects is to publish anonymised data. Furthermore, the project managers have not chosen a control village without BIG which they might evaluate according to the same criteria. Comparative tests of this kind are the international norm.

The promoters of the BIG project failed to cooperate with social scientists of the University of Namibia (UNAM) and empi­rical economists in Namibia. The project management did not organise a single academic conference on the matter from 2007 to 2012. In late 2008, they even declined an invitation to present their project and their initial findings to a group of economists and statisticians in Windhoek.

The methodological shortcomings mean that the project does not provide any serious information on what the scheme actually achieved in Otjivero. The German donors must face the question why they did not insist on professional project management and evaluation. The main reason the project was not managed well is probably that none of several donor institutions assumed responsibility for the project.

Sadly, media reports on Otijivero are not encouraging either. In May 2012, Windhoek’s German language newspaper, the Allgemeine Zeitung, wrote that, despite the income support, “no development of any kind is to be seen in Otjivero”.

VEM recently communicated that it is considering a second attempt at intro­ducing a BIG scheme in Namibia, avoiding the methodological flaws of the first one. This time, the agency intends to pick two villages in order to be able to compare a place with BIG with a place without BIG. Moreover, researchers from UNAM would be involved right from the start.

For any new project to succeed, such modifications are important and necessary. There must not be another instance of a long-term project which, because of its technical shortcomings, does not stand a chance of making the government change its views. The BIG project gave rise to high hopes and then disappointed many people. Instead of starting a new, better designed BIG experiment, the emphasis should be on improving employment and income opportunities in the village, relying on conventional means of development cooperation. The villagers have a lot of good ideas for meaningful measures.

One of the German project leaders once said: “The BIG project is not about an academic exercise, it is about the people.” It’s time to live up to that statement.


Rigmar Osterkamp worked at the Namibia Economic Policy Research Unit (NEPRU) and later at the University of Namibia (UNAM) on assignment from the Frankfurt-based Center for International Migration (CIM) from 2007 to 2011.
rigmar.osterkamp@gmx.de

As former leaders of the Basic Income Grant pilot project in Namibia and co-authors of the related research reports we wish to correct several false claims made by Mr. Osterkamp.

Mr. Osterkamp claims that the project did not cooperate with economists engaged in empirical research. This is incorrect. The Namibian research team was accompanied by three professors of international standing. All three are professors of economics with many years of experience in empirical research and long lists of academic publications.  They are Professor Nicoli Nattrass from the University of Cape Town and Yale, Professor Mike Samson from Williamstown in the USA and Professor Guy Standing from the University of Bath in the UK.

Mr. Osterkamp’s claims regarding the funding of the BIG pilot project are equally false. The pilot project was financed from various private and public sources. The funds came from different countries and not only from Germany. The Friedrich-Ebert-Foundation did not contribute to BIG payments in Otjivero. The Protestant Church in Rhineland mainly donated money raised in an offering. It is a distortion of facts to argue that Germany's Federal Ministry for Economic Cooperation and Development was somehow "indirectly" involved in the financing of the BIG.

In his attack on the BIG pilot, project Mr. Osterkamp refers to his own analysis, published in a NEPRU Quarterly Review in 2008. As pointed out by the BIG Coalition at the time, Mr Osterkamp’s analysis was methodologically flawed.  Mr Osterkamp erred in using arithmetic averages for his poverty assessment, which led to his false conclusion that there were poor households in Namibia but not in Otjivero. NEPRU admitted to this serious methodological flaw in a press release of 5 December 2008 and withdrew the review containing Mr. Osterkamp’s analysis.