Drought is the new normal

In East Africa, agricultural policies must focus on the availability of water. The region is becoming more arid, so water supply cannot simply be left to nature. Adaptation to climate change is indispensable.

last contributed to D+C/E+Z in sommer 2020 as director general of the Sustainable Development Goals Center for Africa (SDGC/A) in Kigali, Rwanda. 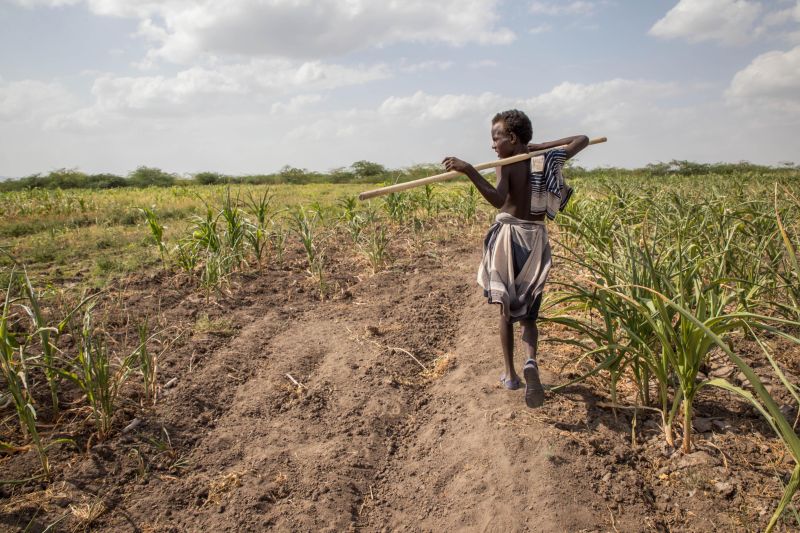 Throughout Africa’s history, drought has been a regular feature. It is a natural phenomenon that has caused calamities claiming lives of millions of people and causing enormous social, environmental and economic impacts.

East Africa – and especially the Horn of Africa – are affected in particular. Things are getting worse, however.  Half a century ago, drought used to occur once every ten years, and then once every five years in the 1980’s and 1990’s. Since the turn of the millennium, it has occurred literally every other year. Many studies indicate that this trend will continue and intensify.

Some countries have seen an increase in average temperature of about one degree since 1970. In 2011, 13 million people in Djibouti, Eritrea, Ethiopia, Kenya and Somalia experienced one of the worst humanitarian crises in recent history according to UNEP. In 2014, 2015 and 2016, drought occurred in Ethiopia, Somalia and Kenya  affecting more than 15 million people. Another drought struck this year in all the above mentionend countries plus South Sudan. Once more, UN agencies are speaking of famine.

It is irrititating that drought is still considered something unusual and that  responses tend to be improvised and awkward. Mindsets must change. Drought is the new normal. Policies for the region, and especially its farms, must take this reality into account.

African agriculture is predominantly rain-fed. It is marked by low inputs and low outputs, resulting in hand-to-mouth livelihoods. About 80 % of East Africa’s sedentary farmers who live in areas with up to 1,300 mm of precipitation practice subsistence farming.

Traditionally, three factors are considered: land, labour and animal power (mainly oxen, donkey or camel). The farmers also use simple tools, of course. That the farms need water did not get much attention in the past, because rain was beyond human control.

The new narrative must be that water is the most critical input, even for subsistence farms. Accordingly, any kind of policy must consider water availability. It has become irresponsible to rely simply on nature.

Ensuring water supply in the form of irrigation will make a big difference. Of course, irrigation systems depend on rain too, but prudent watershed management, competent regional planning and sparing use of available water resources will help to make the most of whatever rainfall there is.

The point is that policymakers and grassroots communities will not rise to the relevant engineering challenges unless they accept that climate change matters. In drought-prone areas, all players must plan their action with water in mind. Doing so properly, they can save millions of lives and prevent humanitarian disasters.

Scientists and researchers will have to do their part. Agronomists and breeders  need to come up with crop varieties that need less water. Technologists have to move aggressively on water harvesting and cost-effective irrigation equipment. Pathologists and entomologists have to be alert and respond to new pests and pathological strains emanating from the change in the seasons and planting materials.

Extension agents have to be well equipped to teach farmers and possibly consumers about all these new developments. Appropriate crop and livestock insurance policies and products could also be built into this new production system. Pastoralist communities and their herds must not be neglected either.

Drought can no longer be considered an unusual calamity. East Africa is now obviously a low-rainfall area, so the region must adapt to climage change. There is no alternative.

Belay Begashaw is the director general of the Sustainable Development Goals Center for Africa in Kigali, Rwanda.
bbegashaw@sdgcafrica.org

How to erode people’s trust during a pandemic