Today, global trouble spots are close to the “safe haven” of Europe. Migratory pressures have grown with masses of people arriving from war zones and disaster areas. The irregular immigrants take tortuous routes, either through Mediterranean countries or across the EU’s continental borders. These routes cannot be effectively policed, so an agency was created in 2005 for the management of operational cooperation at the external borders of the EU. It is called Frontex and is most controversial.

contributed to D+C/E+Z in winter 2017/2018 as a lawyer and research associate at the University of Passau where he specialises in German, European and international criminal law. 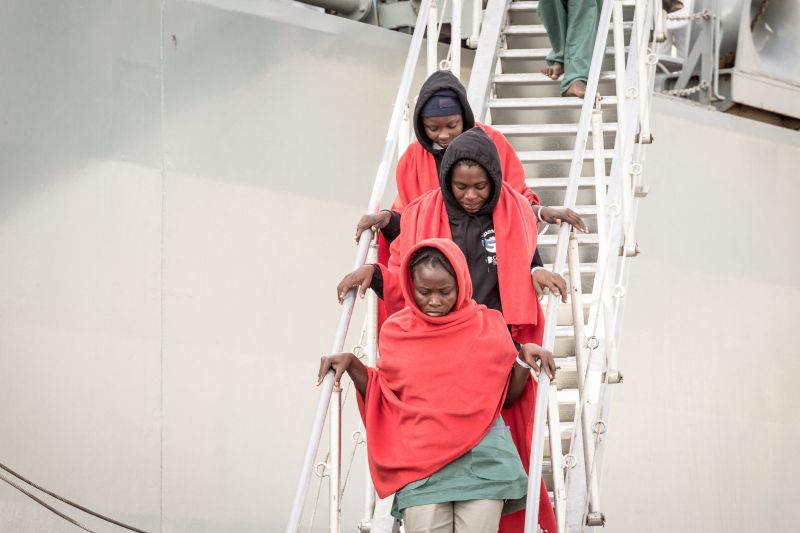 Amoruso/picture alliance/Pacific Press Agency Many refugees reach Europe from Africa by crossing the Mediterranean. One of Frontex’s tasks is to prevent them from doing so.

Frontex was not originally intended to operate as a border police force; it was established as an “Agency of the European Union”, a body governed by European public law. Its primary task is to coordinate the operations of EU member states’ security agencies on the EU’s external borders. Frontex operates “on water, on land and in the air”. It forms task forces and organises large-scale joint operations. It also helps member states return irregular immigrants.

In September 2015, the EU heads of state and government wanted the external borders to be policed more intensively. Accordingly, Frontex was given more operational powers, and, despite stagnating refugee numbers, its budget was steadily increased, rising from € 86 million in 2013 to € 254 million in 2016. Another consequence of member-state solidarity was the adoption of Regulation (EU) 2016/1624 of 14.09.2016. It established a “European Border and Coast Guard Agency” with the same short name as the agency it superseded: Frontex.

The “old” Frontex often came under fire from critics. Human-rights and aid organisations accused it of violating human rights with its push-back operations, some of which were said to breach international refugee law. There is a serious conflict of interests – refugee protection versus border protection. This tragic tension is evident on the Mediterranean Sea.

As early as 2013, the Council of Europe spoke of human-rights violations by Frontex and noted problems of transparency regarding operations and activities. It also found a lack of democratic oversight, for example, with regard to the agreements concerning border controls, interceptions and returns that Frontex negotiates with third countries.

Some civil-society groups even refer to Frontex as “Europe’s paramilitary arm” against migration from Africa.

That last criticism in particular is hardly accurate. First of all, it is linguistically inappropriate. The negative connotations of the word “paramilitary” make it a term that should be used only with extreme care: “paramilitary” does not automatically mean “illegal”. Second, it ignores the agency’s institutional incorporation in EU law and international standards. Frontex only rudimentarily resembles a European border police force and certainly does not create a serious European military force. This is the case, because the EU is not a nation state with an integrated and fully harmonised policy on security and defence.

Member states still have the responsibility to secure their own borders, so Frontex is merely a kind of law enforcement agency that is implementing the EU’s limited powers in the field of border policy. Moreover, the agency’s incorporation in the institutional and legal structure of the EU runs counter to the presumptuous claim to irregular power that the word “paramilitary” suggests. It is true, nonetheless, that Frontex has undergone considerable change in recent years (see box).

Frontex’s operational powers have been steadily increased. The agency now carries out substantive police duties and has its own physical resources – including boats, helicopters and staff – to support national border patrols. But the criticism of paramilitarism would only be fair if the agency conducted operations without sufficient authorisation. That perception is misleading. The new Frontex Regulation instead gives the agency a very broad mandate.

Frontex has been legally mandated to support border management. But even with the new Frontex, the main responsibility for guarding the EU’s external borders continues to reside with the member states. At the same time, the agency is accountable to the European Parliament and the Council of the European Union. Thus, it does not operate in a legal vacuum. On the contrary, multiple legislation applies in both geographical and legal terms to border management and the associated task of picking up refugees and other irregular migrants.

People from third countries have no fundamental “claim” to enter the EU. However, this does not mean that immigrating nationals of third countries have no rights at all. Border guards are required to observe minimum standards and must comply with international law. The situation at sea is covered by various regimes of international law (for example, the International Law of the Sea and the Geneva Convention) as well as European law (EU legislation, the EU Charter of Fundamental Rights and secondary legislation such as Regulation [EU] No. 656/2014 [External Sea Border Regulation]). Moreover, European fundamental rights and the European Convention on Human Rights apply in full. Because of the acknowledged extraterritorial effects of human-rights law, operational units cannot offload their responsibilities even outside EU territory.

That Frontex has a clear legal mandate, however, has not solved all problems – far from it. The main problem is that the EU only really addresses the symptoms and not the causes of migration. For good reason, Amnesty International highlights the “humanitarian catastrophe” in the Mediterranean, where thousands of people a year drown in the attempt to reach an EU country in unseaworthy boats from North Africa or Turkey. Frontex is neither the cause of this tragedy, nor is it the cure.

It must remain possible for people to flee to Europe and find asylum there. But because a united Europe is possible only if the security of its citizens is guaranteed, the EU’s external borders also need to be managed and secured in line with the rule of law.

The continent’s image is suffering, either way. Is it a “Europe without borders” or a “Fortress Europe”? For a long time, Frontex’s opaque public relations helped to shape that awkward latter impression. At the same time, the old problem still persists for the new Frontex: a coast guard service – whether paramilitary or not – ultimately addresses only the symptoms, not the cause of refugee movements. In any case, furnishing Frontex with even more operational powers should be viewed with scepticism. Concentrating too much power in an agency’s hands without mechanisms of oversight risks opening doors to self-authorisation.


Oliver Harry Gerson is a lawyer and research associate at the University of Passau where he specialises in German, European and international criminal law.
oliver.gerson@uni-passau.de