Poisonous air is making us sick

Smog has been identified as a leading cause of lung cancer. It is harder to gauge exactly how devastating and lasting the impacts of serious air pollution are. Large areas of China are frequently blanketed by a brown haze of hazardous air pollution.

last contributed to D+C/E+Z in spring 2020 as the China correspondent for the tageszeitung (taz), a German daily newspaper. 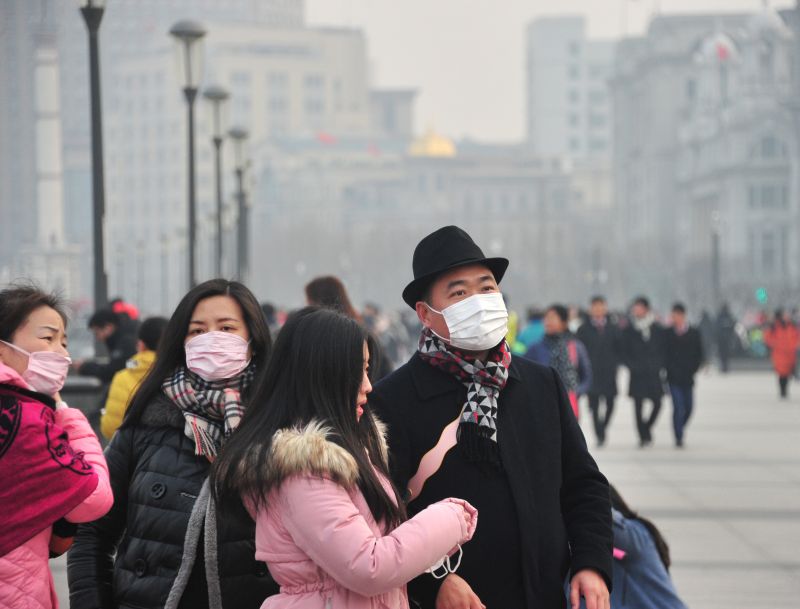 Zhong Yang/Imaginechina/picture-alliance/dpa The protection masks offer are limited, but in China’s smog-engulfed cities – like Shanghai, for example – they have become a regular outdoor accessory.

Surgeon Zhao Xiaogang wanted to express in words what he experiences at the hospital every day. So he wrote an admittedly satirical poem about respiratory disease. The opening line describes what Zhao has seen on a growing number of computer tomography images: “I am the lung’s ground glass opacity (GGO).” The murkiness has “fed on the delicious mist and haze,” and is in good company with “my fellows swimming in every vessel. My people crawl in your organs and body.” The poem is an ode to broken bronchia and lung cancer.

A translation of the poem was published in a medical journal in the USA a little more than a year ago. Soon, Chinese news sites picked up the story, and it went viral on the internet. Zhao was surprised at how strongly his words seemed to resonate. He said: “I wrote this poem to bring ordinary people some common knowledge of pulmonary disease, lung cancer and other illnesses that result from constant exposure to smog.”

The health consequences of air pollution are a huge and widely discussed issue in China today. In October, the government took ambitious steps to clean up the air, closing tens of thousands of factories and coal-fuelled power plants across North-Eastern China. In one of China’s hardest-hit regions, the greater Beijing metropolitan area, smog levels are lower than they had been in years. But other parts of the country are still cloaked in the brown haze of the noxious air that China has become known for. And it is only a matter of time before the economic pressure reaches a boiling point, forcing the government to allow the factories around Beijing to re-open. Then the city will disappear in a new cloud of smog.

Pervasive air pollution results from decades of a booming economy and runaway growth. China’s heavy-industry sector has become huge. In 2016, Hebei, the province surrounding Beijing, produced more steel than the rest of the world put together. Moreover, coal-fuelled power plants cover two-thirds of the People’s Republic’s energy needs. It is no wonder that China spews more particulates and greenhouse gases into the atmosphere than any other country.

It is a well-established fact that people who are regularly exposed to smog show a much higher incidence of lung cancer. Burning coal and other fuels releases huge amounts of particulate matter into the air. The finest particles, anything less than 2.5 micrometres (PM 2.5) pose the greatest health risks. When breathed in, they can work their way into the alveoli in the lung and into blood stream next.

In China’s cities, airborne fine particulates are a toxic concoction of nitrogen oxide, carbon monoxide and sulphur dioxide. These tiny particles spread throughout the body, where they can trigger deadly carcinomas. While some may form quite quickly, cancer more often develops slowly and stealthily over several years. It is impossible to accurately predict just how many people in China will develop lung cancer in coming decades. It is similarly difficult to gauge the health consequences of long-term exposure to smog. It is clear, however, that they can result in irreparable debility and premature death.

Song Jaili, a doctor at the renowned Xuehe Hospital in Beijing, knows first-hand that smog leads to chronic lung disease. In her office, she explains the process, using a laser pointer to highlight the white spots on an X-ray of a female patient’s lung. “This is not a smoker’s lung,” the 58-year-old physician points out. It is a steel worker’s lung. The doctor has dedicated most of her career to the effects of smog on the airways, a problem the Chinese government denied until just recently.

Song explains that sulphur dioxide reacts with water to form sulphuric acid, an irritant that inflames the eyes, skin and airways. When first exposed to smog, a healthy person will experience temporary symptoms like headaches and nausea. Fine dust particles may build up in the lungs, causing inflammation long before cancer has a chance to develop. The body responds by mounting an immune attack, and patients frequently experience a hacking cough, often with discharge. For healthy people, temporary exposure is not particularly problematic, and the coughing will go away with the smog once the immune system is not longer battling with alien particles in the lungs.

People forced to breath in smog, exhaust fumes and other poisonous particles on a regular basis are not so lucky. The contaminants can cause irreversible damage to the lungs. Doctors speak of “chronic obstructive pulmonary disease” or COPD. The symptoms include a chronic cough, which can develop into chronic bronchitis if the mucous membranes in the lungs are damaged.

A healthy set of lungs responds easily to the body’s changing oxygen needs. But chronic bronchitis narrows the airways so not enough air can pass through. The result is shortness of breath. Over time, respiratory distress causes the lung tissue to over-expand, leading to pulmonary emphysema. The heart beats faster to compensate for the lack of oxygen, overworking the heart muscle and ultimately resulting in serious cardiovascular disease.

The elderly, children – whose organs are not yet fully developed – and people with weak hearts are particularly susceptible to the risks of smog. “Extreme exposure to contaminants weakens the immune system and can facilitate breathing problems and cardiovascular disease,” Song notes. The Beijing Health Department issues a health warning when the haze over the Chinese capital thickens, and that happens with alarming regularity. Song says: “This is why the number of strokes and heart attacks immediately shoots up when air pollution levels rise.” Polluted air changes the heartbeat and can put the entire autonomous nervous system off kilter, she says.

Scientists have demonstrated how quickly the body responds to poisonous air. According to doctor Song, the first symptoms – an overall feeling of malaise and a dry cough – occur within 15 minutes of exposure. An inflammatory response generally begins after two to three days, and around a week of exposure to smog results in a constant irritation in the lungs.

People who have sustained lung damage from smog are advised to go to a place with cleaner air as quickly as possible. This is easily said, but hard to do in China. In some winters, more than 800 million people live in central China under a thick blanket of haze for weeks on end. Even neighbouring countries like South Korea, Japan and Taiwan suffer from the air pollution that blows over from China.

Face masks are a very common sight across East Asia. People want to protect their lungs from the contaminated air. And while a face mask is an integral part of almost any Chinese urban dweller’s outfit today, their effectiveness was only recently tested by scientists at the University of Massachusetts Amherst. Researchers found that the most popular washable cloth masks primarily filter large particulate matter from the air, allowing the smaller ones to pass right through. Worse yet, wearers tend to breathe more heavily under a mask, so they may actually be inhaling more of the dangerous tiny particles. More effective prevention methods include surgical masks and indoor air filters that remove particles under PW 2.5. These options are very expensive though, and only the wealthy can afford to buy them.

Studies in the USA have also found that a vitamin-rich diet can help counteract the negative health impacts of smog exposure. Scientists discovered that the lungs of children in Mexico City who drank a glass of orange juice every morning were less affected by the fine airborne particulates than those of children who did not start the day with a glass of juice. Beijing-based doctor Song, however, cautions: “I wouldn’t count on orange juice alone.”

Felix Lee is the China correspondent for the tageszeitung (taz), a German daily newspaper.
felix.lee@taz.de