Supported by the government, the use of digital technologies is spreading fast in India. Millions of people access various kinds of services online. However, the lack of digital infrastructure in rural areas leaves the poorest unconnected. 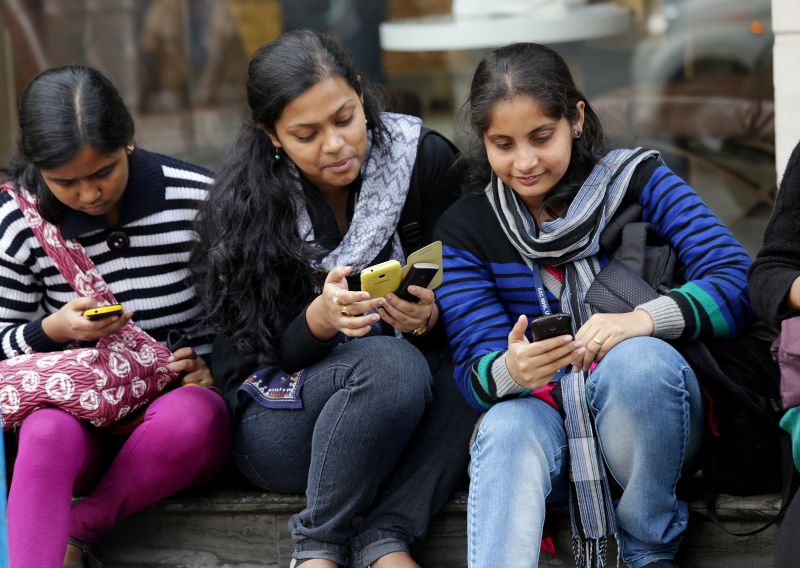 Adhikary/picture-alliance/dpa Students with smartphones in Kolkata.

In the early 1990s, it was most difficult to get a reservation on a long-distance train in India. Now it is possible to reserve a berth on the train of choice via internet. One million tickets are booked this way every day, making the Indian Railways’ reservation and ticketing website the largest digital application of its kind on earth. In 2015, there were 6.75 billion electronic transactions relating to government utilities and services in India.

The use of digital technologies is rapidly spreading. By the end of 2015, the country of 1.2 billion people had more than 1 billion mobile phones. Some 400 million people used the internet. The Telecom Regulatory Authority of India puts the total number of broadband connections at 131 million, while the Internet and Mobile Association estimates the figure to be 197 million. The national database that stores biometric identification data now has records for 975 million citizens, covering more than 75 percent of the population. Facebook has 138 million users in India, while 22 million are reported to be active users of Twitter.

In the private sector, banking and insurance services have been digitised. More than 200 million new bank accounts were opened last year using digital technologies and identification data. Transaction times have been reduced accordingly, and the scope for middlemen to benefit from petty corruption has been reduced considerably.

The right-wing Bhartiya Janta Party (BJP) which came to power in May 2014 under the leadership of Narendra Modi emphasises the use of ICT in governance. It uses the slogan Digital India to promote all relevant programmes, and it leverages social media for political propaganda and image building (see my comment in D+C/E+Z e-Paper 2015/11 ).

These goals make obvious sense. But though targets have been set, there is no clarity on timeframe, implementation or funding. For instance, the government plans to provide broadband services in 250,000 village councils by 2017, but it is unclear how last-mile connectivity will be achieved.

Poor digital infrastructure is the biggest hurdle India faces on the road to digital connectivity for all. This fact is often overlooked in view of the impressive absolute number of mobile phones. However, when it comes to accessing digital products and services, the digital divide between urban and rural areas and between the rich and the poor remains wide and is probably even growing. Most mobile phone users live in cities, and this is also where WiFi hotspots are being created in public places like railway stations, airport lounges and historical monuments.

Sixty-nine percent of India’s population live in rural areas – but only 40 % of its mobile phone users do so. The share of internet-connected phones is even lower in the countryside. According to a World Bank report released in December 2015, India has the world’s biggest offline population with 1.063 billion people, followed by China with 755 million people.

Some experts point out, however, that many services can be accessed without an internet-enabled device. “Voice and text-based features have been integrated in most of the e-governance delivery services, so you don’t always need a smart phone”, says Osama Manzar, director of the not-for-profit Digital Empowerment Foundation in New Delhi, adding that “access to e-services is not limited to mobile and individual internet connection, but they can be accessed from Common Service Centers, cyber cafes and NGO-run access points which provide broadband connectivity.”

Robin Jeffrey, author of the 2013 book “Cell phone nation: how mobile phones have revolutionised business, politics and ordinary life in India”, states: “Mobile phones can help overcome hurdles of illiteracy and multiplicity of language. The beauty of the internet is that its features are based not on writing but on pictures. It is friendly to illiterate and newly literate people.”

The experience of the past two decades in e-governance shows that it can’t be effective without digitising the internal work processes of the government at all levels, down to village councils. Subhash Bhatnagar of the Indian Institute of Management in Ahmedabad points out: “While basic infrastructure for connectivity and data storage has improved significantly, the real bottlenecks are attitude-related. At both political and administrative levels, desire for making service delivery transparent and efficient is weak.”

Furthermore, preparedness and implementation of e-governance varies among different states, making the adaption of large-scale national projects difficult. Sowmyanarayanan Sadagopan of the International Institute of Information Technology in Bangalore sees additional challenges, including the cost of technology and the lack of technical manpower in the government to replicate many successful pilot projects. “Youngsters do not find government salaries attractive,” he says, “and there is no lateral recruitment in the government.”

Access to mobile phones without access to other basic socio-economic goods like health care, education, safe drinking water and sanitation does not fundamentally alter the lives of the poor. The way people access and use digital technologies depends on basic literacy and other capabilities, as Mannathukkaren points out. In his view, Kerala is the first fully digital state in India because it had already met the basic health and education needs for most of its people before the digital age truly took off.

Management scholar Bhatnagar says that India’s ICT potential remains unexploited. For instance, health services could improve if doctors and nurses were taught to use and produce training video clips. They could also use mobile phones to collect data on services they provide and connect to specialists’ consultation in case of emergencies. Innovative applications of ICT in health are being developed, but they are yet to be rolled out on mass scale.

An example of such innovation is a health tablet called Swasthya Slate, which health workers can use as a mobile diagnostic unit. The approach is fascinating. To serve the entire nation, however, connectivity in rural areas must improve. Services as well as mobile apps must be made available in Indian languages, moreover. Swasthya Slate supports three Indian languages, besides English.

“If Digital India is to be achieved, we need clear prioritisation of goals, starting with creating a robust and secure infrastructure, and capabilities for maintaining it. Basic software applications and educational content need to be developed and made available in multiple Indian languages,” feels Nirvikar Singh, a professor of economics at the University of California Santa Cruz.

Dinesh C. Sharma is an India-based journalist and a fellow at the Centre for Media Studies in New Delhi. He wrote the book “The outsourcer: the story of India’s IT revolution”, 2015, MIT Press.
dineshcsharma@gmail.com