One of the major questions transitional societies have to deal with is whether or not retributive justice should be pursued, or whether emphasis should be on restorative justice to promote national healing and reconciliation. It is not an easy one to answer. If retributive justice is to be pursued, then further issues arise relating to what institutional structures be put in place for such trials. If restorative justice is to be pursued, on the other hand, the sense of impunity may undermine nation building. There are no easy answers to these questions, and these questions can neither be avoided nor evaded. 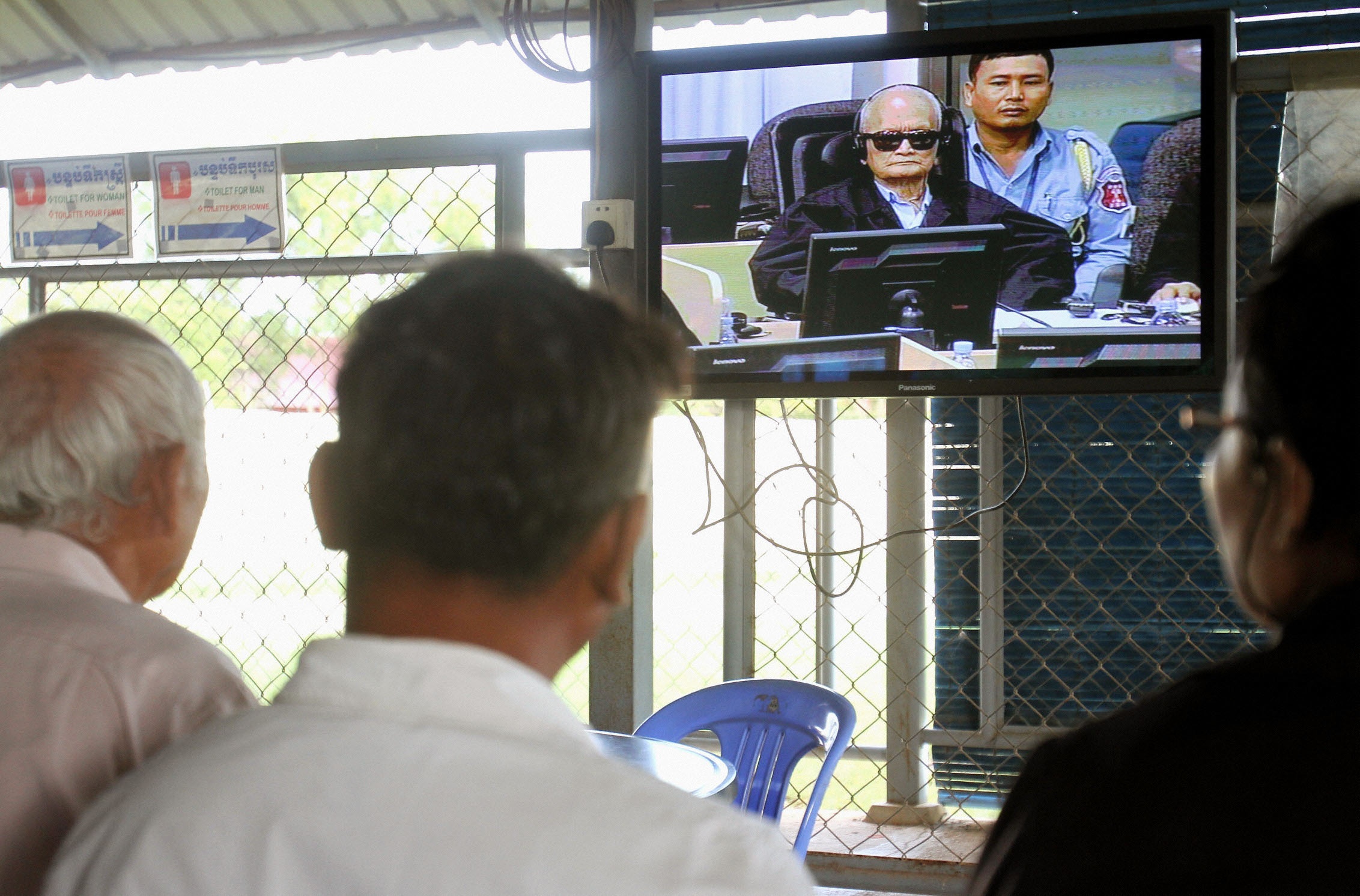 (Kyodo/picture-alliance) Funding matters: without donor money, there would be no war-crimes tribunal in Cambodia.

Countries recovering from civil crisis are often described as being in “transition”. Transition covers the period of movement from an old legal order attacked or destroyed by war, civil strife or political crisis, to a new one of democratic governance. The goal must be the peaceful co-existence of former enemies. One of the big questions in this context is whether transitional justice should be “retributive” in the sense of punishing perpetrators, or “restorative” in the sense of acknowledging and compensating victims’ suffering.

It is true that whenever “justice” is qualified by another word, it invariably dilutes the purity of that commodity and is not “real” justice at all. Be that as it may, there are occasions when “justice” as we know it may not be available, or even possible. Like the two-faced Roman god Janus, transitional justice in post-crisis countries looks backwards to demand accountability, and forward at the same time to reconstruct the future.

The international community has set its face against impunity, and will not condone any situation in which perpetrators are granted blanket pardons. However, such a posture does not address issues relating to whether compromising justice in favour of peace would be a necessary sacrifice that a society would have to make. Nor does it address the issue of whether there would be an enduring enough peace to permit reconstruction because of a general apprehension among the populace that the future is not secure as many people harbour grievances of not having been well-served by the compromises. All things considered, there are no straightforward answers to the question of whether violators of international humanitarian law should be prosecuted or pardoned – especially when they remain powerful enough to disrupt the social order.

Issues of past and future

Transitional justice brings into focus issues pertaining to the past as well as to the future. It always takes place in a highly contested political space. It confronts questions that are critical to post-conflict recovery, but have no obvious answers:

For the international community, there may be issues of realpolitik to deal with, depending on the stage at which issues of accountability arise. For instance, if the international community insists on retributive justice to prevent impunity, that would not encourage other warlords in the future to lay down their arms and pursue political settlement. The Liberian Comprehensive Peace Agreement (CPA), which finally brought peace to Liberia after 14 years of civil war, would never have been signed had the possibility of prosecution been seen to be real at the time. Indeed, the former adversaries later threatened to return to war if anyone laid hands on any of them to put them before a court. They felt that they had been granted amnesty in recognition of their participation in the peace process. Otherwise they would probably not have signed on to the CPA.

Peace due to impunity?

If war lords fight tooth and nail to retain control over state power, the peace process might be endangered. When a society has a chance to achieve peace rather than a continued state of war, it would seem un­reasonable to insist that there could be no amnesty, and so prolong the conflict.

On the other hand, tolerating impunity so that the powerful would have no fear of future consequences and future accountability, is not really an option either. It would remove any disincentive for leaders in other parts of the world to refrain from perpetrating gross human rights violations or taking advantage of the vulnerable under similar circumstances. It would also make a recurrence of the conflict in the society concerned unavoidable.

Where “victor’s justice” is possible because of an imposed peace by a strong external power, or because one side clearly lost, retributive forms of justice such as criminal trials and punishment are possible. Typically, they are preferred by those who are in power. However, where there is an arranged or negotiated peace, with the former leaders still powerful even if they no longer control state power, the situation becomes more complex. For instance, in Liberia, although most people appeared to believe that the “war lords” should be punished for what they did to the civilian population, there was no such unanimity of thought as to who qualified as a “war lord” deserving punishment. One person’s “war lord” is thus likely to be another person’s “hero”; many people involved in criminal action believed that they were serving their people’s interests.

Where perpetrators of grave human rights crimes are not prosecuted, there is a risk of old wounds being re-opened fast, and social tensions being ignited by innocuous events. Society may constantly be on tenterhooks. Choosing to prosecute perpetrators has its attractions. At a minimum, it reinforces individual accountability. The emphasis on punishment ensures that those who have inflicted suffering on others are subjected to suffering in their turn.

However, there are a number of practical difficulties with choosing prosecution. For instance, where there have been mass atrocities as happened in Rwanda, Sierra Leone or Liberia, one has to accept the reality that prosecuting everyone involved would be impossible. In Rwanda, traditional courts (“Gacaca”) were put in charge of handling the trials to expedite matters. That approach suited the local situation, but not necessarily international standards of the rule of law.

Another difficulty may be that the courts themselves may have been destroyed by prolonged conflict. Restoring the judiciary to functional capability may involve so much time and expense that the courts will not be in a position to take on such a major task for many years. Where the courts have not been destroyed, the integrity and moral standing of the judges may have been compromised to the extent that they became complicit to atrocities. It might thus be impossible to expect any form of neutrality from the judges. Without neutrality, however, the judicial function cannot be performed with any degree of credibility. Moreover, the requirements for dis­charging the burden of proof might be too much. The acquittal of known perpetrators, however, would be detrimental to any prospect of healing for the victims of the atrocities.

Therefore, those  seeking to subject persons of influence, both social and political, to justice might very well have to redefine the nature of “justice”, or else postpone the endeavour until many years of peace consolidation have elapsed, in order not to unravel the peace. What, then, is the best option for a particular community contemplating avenues for righting past wrongs and settling the account in order to move into the future? The answer is: whatever would let the peace be sustained until the society’s capacity for managing internal differences and fierce controversy can be better handled.

Deferring the day of accountability in this way has sometimes been misconstrued as seeking peace at any price, without adequate attention to the need for justice. The debate as to whether there can be peace without justice, however, must be re-framed to the question whether there can be justice without peace. Clearly the prioritisation of peace cannot mean underplaying the need for justice. It simply means redefining justice so that the two can move in tandem.

In redefining justice, the basic question arises whether it should be “retributive” or “restorative” justice. Retributive justice focuses on punishment of the perpetrator, whereas restorative justice is victim-centered, seeking to rehabilitate or compensate the persons concerned.

An equally important issue is who will decide on the definition and how to implement it? Who, if not the nation’s leaders? But if the leaders will decide, will they not succumb to the temptation to cover up for their own kind? If it is not leaders who decide, then how will the generality of opinion be ascertained? In any case, will a society recovering from conflict be capable of achieving such consensus over an issue fraught with controversy? These questions plague societies in the aftermath of civil conflict – and none of them is easy to answer.

It is a reality that often the decision is not a “choice” made by the people, but an imposition by those who stepped in to bring the crisis to a close or those who won the war. Often the choice made may be a form of “victor’s justice” because the political leaders in office might have been the ones to face questions had the tables been turned. Truth Commissions seem to be more popular with international community than they are with local constituencies, who sometimes consider restorative instead of retributive justice as a slap on the wrist of perpetrators and a slap in the face of victims (see box on p. 470 f.).

There are occasions when the choice is dictated simply by the availability of funding. The question of who would pay for the cost of bringing the former leaders to account may often determine what kind of account would be asked of them. All too often, the choice is made by those who can provide funding for whatever mechanism of accountability is favoured. This invariably becomes an issue of international poli­tics. In Liberia and Timor Leste, for instance, there were no war-crimes tribunals due to lack of funding from the USA and other global powers.

Although the UN has consistently set its face against the granting of amnesties regarding violations of international humanitarian law, the practical effect may be lost if there is no funding available to follow through with the process. Without funding from the interna­tional community, it would be impossible to set up special courts that would deliver justice according to standards of international justice. Nor would it be possible to build and run detention facilities in which the accused persons would be housed for the duration of the trial or custodial facilities within which sentences would be served in the event of convictions.

Maintaining peace is the obvious priority immediately after a conflict has ended. In the long term, how­ever, the traumas must be dealt with. Marginalisation or non-inclusion of certain groups in governance often prove to be barriers to national cohesion. A common characteristic of “failed states” in Africa is the inability to develop citizens’ commitment and attachment to what should be their nation.

No country can hope to enjoy any of the necessary sentiments of nationhood, if many of its citizens are unwilling or unable to peacefully co-exist on account of grudges that they bear towards the state and towards one another. Therefore transitional justice is a development imperative even though it presents difficult questions that must be resolved.

Henrietta J.A.N. Mensa-Bonsu is a law professor at the University of Ghana, Legon. A long version of this essay is posted on our website too: http://www.dandc.eu/en/article/long-version-henrietta-jan-mensa-bonsu-hard-questions-concerning-transitional-justice