“I have no place in society”

Most gays and lesbians in Zimbabwe have to hide their sexual identity. Discrimination, exclusion and violent attacks against them cause permanent fear and loneliness. Many suffer from poor mental health. A local civil-society organisation provides help, but ultimately policy must change.

contributed to D+C/E+Z in summer of 2019 as a counselling psychologist for Gays and Lesbians of Zimbabwe (GALZ). She lives in Harare, Zimbabwe. 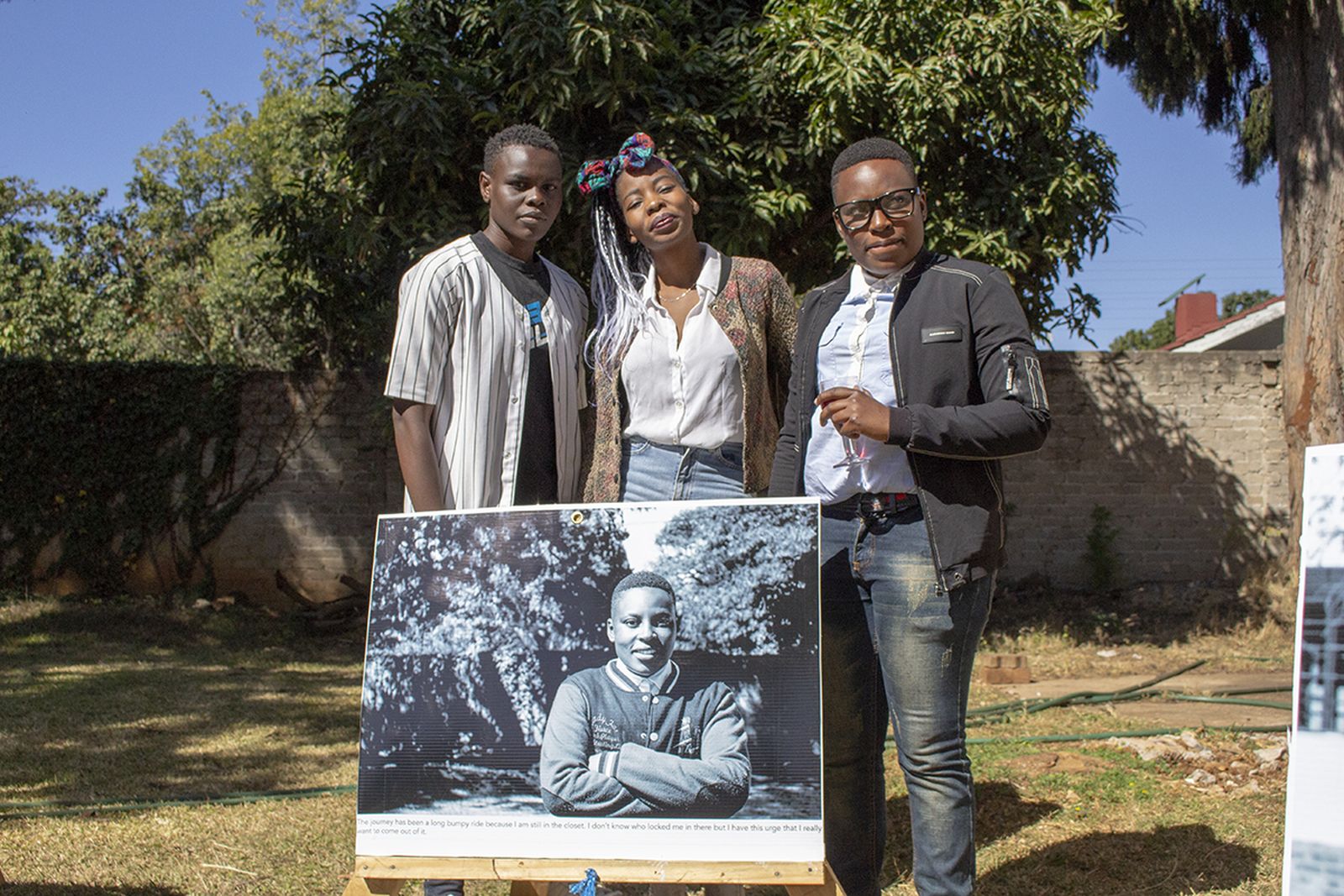 Tash Dowell GALZ activists with a photo of one of themselves in Harare, Zimbabwe.

Ten percent of Zimbabwe’s population are estimated to be gay or lesbian – they are simply born like this. However, only few dare to disclose their sexual orientation. Homosexuality is largely rejected by society and considered a taboo. It is misunderstood as a form of psychiatric problem (see box). Negative attitudes towards people of the LGBTI (lesbian, gay, bisexual, transsexual, intersexual) community are highly prevalent.

“They say I am the reason why the Biblical towns Sodom and Gomorrah were destroyed,” an elderly gay man recounts. “They call me an abomination with no acceptance in the Christian religion.” Another man says that he was harassed at work: “They fired me. I have no source of income anymore.” Many LGBTI people in Zimbabwe suffer from low self-esteem; they are isolated and often depressed. “I have no place in society,” a young Lesbian in Harare says. “Where do I run to?”

Most LGBTI persons give in to pressure from parents and the extended family and agree to heterosexual marriages. They are forced to live a life of deceit and lies, which is emotionally draining and leads to extreme psychological distress.

Zimbabwe is one of the least accepting countries in the world for gay, lesbian and transgender people. A 2006 revision to the country’s criminal code expanded the penalty for sodomy to include acts that “would be regarded by a reasonable person as an indecent act”. This could include two men holding hands or hugging, and it can be punished by an extended prison term.

Zimbabwe is no exception. Homosexuality is outlawed in 35 African countries and punishable by death in two countries, Mauritania and Sudan, as well as in some areas of Somalia and Nigeria, according to Amnesty International.

Homosexual persons are likely to experience violence and marginalisation due to their sexual orientation. Aggression towards them ranges from verbal abuse and bullying to social discrimination, physical violence and psychological torture.

According to a 2018 survey by the non-governmental organisation GALZ (Gays and Lesbians of Zimbabwe), 50 % of gay men in Zimbabwe had been physically assaulted, and 64 % had been disowned by their families. Twenty-seven percent of lesbians also reported disownment. Often, they are accused of exposing their parents to “blame and shame”.

Some families in rural areas assume that their gay son or lesbian daughter is possessed by Satan or demons. Traditional leaders evict them from their villages. A young man from western Zimbabwe, who prefers to stay anonymous, recounts that people in his village believed that “even with a handshake, I would transfer homosexuality”. The elders decided that he was unfit to stay in the community.

But even when moving to cities, LGBTI persons are not safe from discrimination. For instance, they often lose their jobs when their sexual orientation is discovered.

Another frequent problem is bad treatment by health-care workers. Hospital staff are “afraid to touch me,” recounts a gay man regarding his experience with accessing health care in Zimbabwe. “Some will even start preaching the Bible.” Consequently, LGBTI persons often shy away from seeking support from even essential physical health services.

In Zimbabwe and other African countries, it is often claimed that homosexuality is “un-African” and a deviant Western ideology. Robert Mugabe, the former president, publicly called gays “worse than dogs and pigs” in 2013 and threatened to “cut their heads off.” In this context, many law enforcers still do not respond as they should when the human rights of someone who belongs to a sexual minority is violated. They tend to be more concerned with the sexual orientation of the victim than with the crime committed.

Due to living with this stigma, people from the LGBTI community have an increased risk of mental and psychological problems. These problems range from anxiety disorders and depression to substance abuse and risky sexual behaviour.

Consequently, there are higher incidences of suicide attempts and suicide related deaths amongst men who have sex with men. Such trends are known around the world and tend to be underreported even in countries where the rights of LGBTI people are fully acknowledged. Stigma and exclusion obviously make matters worse in places where that is not the case. Civil-society activism can improve things, however.

GALZ was founded in 1990. The association provides counselling and human-rights advocacy. With a staff of 32 people, the NGO pushes for social tolerance of sexual minorities and the repeal of homophobic legislation. Its ultimate goal is to obtain psychological, socio-economic and legal justice for LGBTI people in Zimbabwe.

In September 2018, three GALZ counselling drop-in centres were established in the cities of Harare, Mutare and Masvingo, all financed by the Global Fund. Many clients come with signs of depression, suicidal tendencies, paranoia, anxiety and other related challenges. Psychiatric assessments are conducted. To the extent possible, people are given advice at the centre. Counselling therapy sessions can be conducted individually, with couples, or for families or groups. In cases of particularly severe suffering, patients are referred to specialists. Workshops on mental and psychological health of sexual minorities are also offered. GALZ staff follows up with community visits to check on the progress of the LGBTI clients.

A substantial number migrate to neighbouring countries like South Africa, Botswana or Namibia, where the environment is more open and tolerant. However, a lot of them have to engage in sex work to survive.

There is a need for cultural sensitivity training and public health strategies to reduce stigma and to improve access to health care for key populations, focusing on their mental and psychological health. Zimbabwe must finally protect LGBTI persons from discrimination in line with the Yogyakarta principles, a set of rules on the application of international human-rights law in relation to sexual orientation and gender identity.

Grace Badza is a counselling psychologist for Gays and Lesbians of Zimbabwe (GALZ). She lives in Harare, Zimbabwe.
grace.badza@galz.co