Drug repurposing means that a pharmaceutical is used for a different purpose than the one it was originally developed and approved for. The idea is to use an established drug for new therapeutic indications. Interest in the approach has been growing for some time, but Covid-19 has accelerated the trend.

contibuted to D+C/E+Z in spring of 2021. She is a PhD student at Bonn University’s Centre for Development Research (ZEF – Zentrum für Entwicklungsforschung). 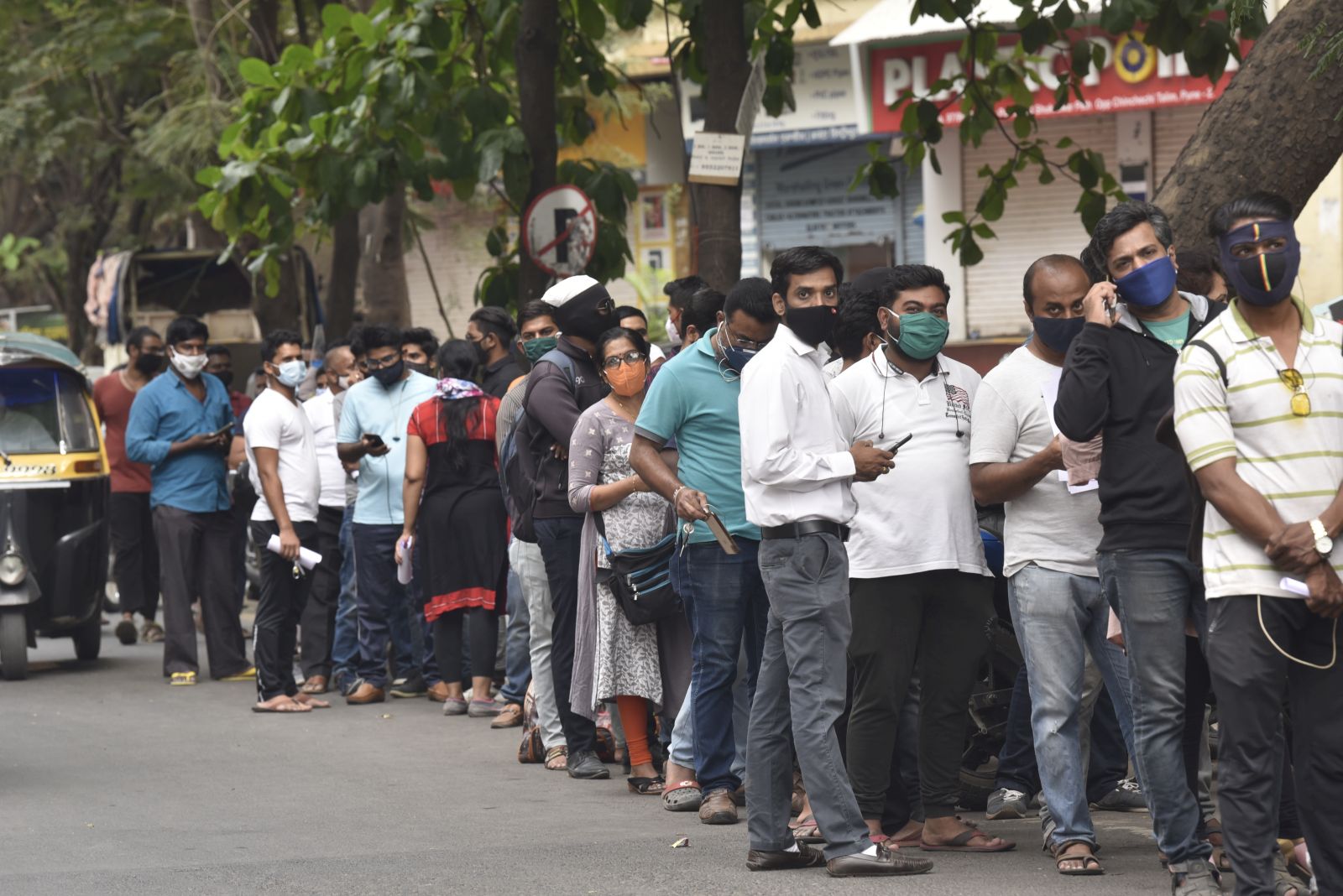 picture-alliance/ASSOCIATED PRESS People lining up in the Indian city of Pune to buy Remdesivir in April 2021.

Developing a new pharmaceutical takes a lot of time (about 15 years) and costs a lot of money ($ 1 billion or more). There are five stages in drug development:

Repurposing can save up to seven years of time and hundreds of millions of dollars. It skips the first stage entirely. Moreover, it gives a chance to reduce or abolish unwanted side effects.

Health-care systems can benefit from the repurposing of generic drugs in particular. These drugs are not protected by intellectual property rights, so their prices tend to be much lower. Moreover, generic production facilities exist in many developing countries, so the dependence on imports is reduced.

Aspirin is one of the best examples for drug repurposing. It was originally registered by the German pharma company Bayer at the end of the 19th century to treat pain and fever, but was later repurposed for many other indications, including blood clots, some kinds of cancer and inflammations such as rheumatoid arthritis. The active chemical is acetylsalicylic acid. It can be derived from plants and has been used in traditional medicine for millennia by various cultures.

Industry observers warn, however, that repurposing regulations must be drafted well so companies cannot rake in excessive profits. On the other hand, pharma companies that specialise in innovative patent-protected drugs will benefit if repurposing means they can sell branded products for more than the originally intended application.

The novel coronavirus has caused the worst pandemic humanity has witnessed since the Spanish Flu a century ago. In absolute numbers, the Covid-19 pandemic is actually the worst in history. By 7 May, almost 160 million infections had been counted internationally. To some extent, of course, the high number reflects that the world population has grown to almost 7.8 billion people, at least four times more than when the Spanish Flu struck.

To date, there is no pharmaceutical treatment specifically for coronavirus, so drug repurposing offers rays of hope. About two dozen previously existing drugs are currently being tested for Covid-19 treatment. Indeed, 225 trials were completed by September 2020. At that point, 321 trials were concluded and documented for the anti-malarial drug Hydroxycholorquine. The respective numbers were 85 for Azithromicin (an antibacterial drug), 52 for Favipiravir and 23 for Remdesivir (two antiviral drugs). Many other drugs were tested as well. So far, none has been fully approved for Covid-19 treatment.

However, the FDA did give approval for treating Covid-19 patients with Remdesivir in certain conditions. This drug does not cure the disease, but it has been proven that it reduces the time patients are hospitalised, need to stay in intensive-care units (ICUs) and depend on ventilators. It is thus valuable in the sense of providing a kind of emergency help. It is nonetheless in huge demand as a supportive treatment or sometimes as a survival drug, not least in India in view of the current coronavirus surge.

The pharma corporation Gilead Sciences originally developed Remdesivir to treat Hepatitis C. Later, the drug was repurposed for Ebola. In business terms, repurposing has made it a much more valuable pharma product. Gilead sales increased in the third quarter of 2020 by $ 2 billion, as the Financial Times reported. Gilead has been accused of charging a very high price (more than $ 3,000 per course in prosperous nations). It states, however, that it is generously donating the drug to developing countries and granting production licenses there. The dispute on how effective it is continues, of course.

Before the Covid-19 related approval, Remdesivir was actually a so called “orphan drug”. This term means that a drug serves only a very specific purpose, so it is not commercially attractive. To some extent, developed nations subsidise the development of orphan drugs if they are believed to be necessary.

Not all hopes come true, of course. When the coronavirus pandemic started, many believed that Hydroxychloroquine would be useful too. The most famous proponent was probably US President Donald Trump, who for some time also did his best to hoard Remdesivir in the his country. Health-care systems in many countries started using Hydroxychloroquine, but the World Health Organization (WHO) later declared it to be useless and even dangerous.

A big question is to what extent Hydroxychloroquine is still being given to Covid-19 patients nonetheless. Apparently, that is happening in several African countries and probably elsewhere too. The background is that doctors prescribe drugs which they believe to be helpful. Government guidelines and even regulations are not enforced stringently in many places, especially in developing countries and emerging markets.

Some antibiotics are becoming obsolete

The implications of drug misuse and overuse can be quite devastating, and not only at the level of individual patients. Indiscriminate use of antimicrobial drugs without adequate indication exacerbates one of the other huge health problems that humanity is facing: the emergence of antibiotics-resistant strains is making an increasing number of important drugs ineffective.

The most dangerous strains today resist more than one kind of antibiotic. According to the WHO, the share of new tuberculosis patients who could not be treated with conventional TB medication was five percent in 2018 (see Roli Mahajan in Focus section of D+C/E+Z e-Paper 2020/03).

Multidrug resistance among cancer patients is worrisome too. Another challenge is that mosquitos become resistant to insecticides with the result of malaria spread­ing more widely.

The more an anti-microbial drug is used, the more likely the emergence of resistant strains becomes. The additional – and often unnecessary – use of antibiotics in the Covid-19 response will increase their overall consumption, potentially multiplying multi-drug resistant strains of various diseases. A long-standing issue is inappropriate drug use. Problems include application of the wrong drug, discontinued treatment of patients before they are cured but also pollu­tion from production sites. These malpractices are particularly common in developing countries. In a similar way, the excessive use of antibiotics in industrial-scale animal farming in advanced nations is resulting in ever more anti-microbial restistant strains.

One implication is that new anti-microbial drugs should be used sparingly so their healing power does not begin to erode. To some extent, this is counterintuitive, however. Doctors like drugs that are particularly effective, and patent holders want to maximise sales before generic production begins.

To some extent, science-based health care is involved in a never ending race. The challenge is to find effective treatments faster than mutant diseases make established treatments obsolete. Indeed, drug repurposing can prove helpful in this context too. In view of the increasing number of drug-resistant disease varieties, the interest in repurposing has been growing for quite some time, even before Covid-19 further accelerated the trend.

In 2020, the Trump administration launched the Repurposed Generic Development Program in the USA. Its main objective is to provide funding for and coordinate testing in the preclinical phase, clinical trials and market approval. About $ 200 million are believed to be needed for the repurposing of one drug. Currently, trials on two generic drugs are ongoing. If one or more succeed, that will further boost the interest in repurposing.

One academic study has warned that the EU institutions and member governments so far are not paying sufficient attention to the potential of repurposing. Pharma companies, however, have taken note. That is also true in India, which has become a global hub of pharma production in the past decades. The pharma industry has had a global outlook since its beginnings, and Covid-19 has further boosted the interest in foreign markets.