When armed insurgents win a civil war, they tend to establish authoritarian regimes. Eritrea is a depressing example. The military mindset that was shaped in the conflict is still prevalent.

contributed to D+C/E+Z in winter 2017/2018. Diglel Fadi is the pseudonym of an Eritrean refugee who wants to stay anonymous for reasons explained in the essay. The editorial team of D+C/E+Z is in touch with the author. 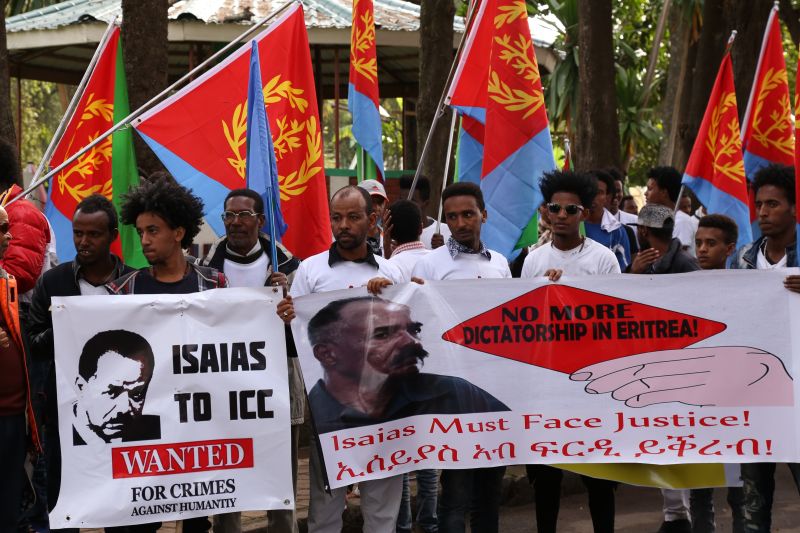 Eritrea has been a one-party state ever since the liberation forces attained independence 26 years ago. It has never held a presidential election. All the governors, mayors and other political leaders are members of both the military and the party. The regime relies on brute force as well as a vast spying network. It pays supporters inside the country and beyond its borders to surveil dissidents – and anyone who might become a dissident.

Human Rights Watch, the international NGO, reports: “Eritreans are subject to arbitrary arrest and harsh treatment in detention. Eritrea has had no national elections, no legislature, no independent media and no independent non-governmental organisations since 2001. Religious freedom remains severely curtailed.”

In 1993, after 30 years of violent conflict (see box), Eritrea achieved its independence from neighbouring Ethiopia. Until 1942, Eritrea had been an Italian colony and was run by Britain after the Italian forces were beaten in the 2nd World War. In 1952, it was annexed by Ethiopia, officially as part of a UN-sanctioned federation. Ethiopian governments – whether under emperor Haile Selassie or later under the communist dictator Mengistu Haile Mariam – did their best to suppress the independence movement.

Mengistu was overthrown in 1991. At the time, Isaias Afewerki, the leader of the Eritrean People’s Liberation Front (EPLF), was an ally of Meles Zenawi, the leader of the Ethiopian People’s Revolutionary Democratic Front, an alliance of rebel movements that were based in various regions and accepted the idea of Eritrean sovereignty. Eritrea thus became a sovereign state in 1993. Afewerki became its president, and the EPLF became the People’s Front for Democracy and Justice (PFDJ), the nation’s only political party.

Meles went on to become Ethiopia’s prime minister. Afewerki and Meles later fell out, and a brutal war was waged along the border in the late 1990s. Both sides lost thousands of soldiers. According to estimates, the monetary costs of war amounted to about $ 1 million per day for both countries. Of course, the bloodshed did nothing to reduce poverty, but the related propaganda helped the governments to bolster their power domestically.

Afewerki has declared that the liberation war claimed 65,000 lives of Eritreans and that 16,000 died in the border conflict of the late 1990s. International observers reckon that there were many more Eritrean casualties in both conflicts.

Under Afewerki, a constitution was drafted, but it was never implemented. His regime runs the country as if it were an army. The commanders’ mindset was shaped in war. The leaders have done well, but their troops have kept living in poverty.

In 1994, the Afewerki government introduced a compulsory “national service”. Its training camp Sawa is an army camp. Every year, 10,000 to 25,000 high-school students are recruited, and they undergo military training in Sawa for a period of six months. For all youngsters, the 12th year of school takes place here. The service has no time limit, however, and the women and men drafted do not know for how long they must serve. Some are not set free before their 50th birthday. Human Rights Watch reckons that “several thousand people” flee from Eritrea every month to escape the national service.

The programme was initially based on the idea that the country needs cheap manpower to build infrastructure. The trainees are forced to build roads, for example. It has long become clear, however, that the service reflects the regime’s military ideology. Many Eritreans think that the national service is simply a means to protect the current leaders.

The regime does not tolerate criticism even among its ranks. After the turn of the millennium, a group of 15 politically active EPLF members expressed their frustration with how the nation was developing. They called for free elections. They are known as the G15, and 11 of them are still in prison. Three have fled to the USA, and one has recanted and rejoined the regime.

The freedom fighters won independence thanks to their determination, unity and patriotism. However, that spirit has long since died, and the regime has lost its credibility. The current Eritrean military includes former freedom fighters as well as Sawa camp trainees. For obvious demographic reasons, the youth trained in Sawa are now the majority. The military no longer has a distinct ideology apart from the desire to stay in power. The youth in its ranks see no hope in the future.

Most Eritreans feel that the victory in the war for freedom has been robbed by the current dictatorial regime. Former freedom fighters feel they have been betrayed by the government which is unwilling to acknowledge their sacrifice and lets them suffer in poverty.

Depressingly, things are not really better in neighbouring Ethiopia, where the human-rights record is bleak and elections have become a joke. In 2015, the ruling party won every single seat in the Ethiopian parliament. The sad truth is that the rebel movements that toppled Mengistu did not liberate the people, but basically empowered their top leaders.


Diglel Fadi is the pseudonym of an Eritrean refugee who wants to stay anonymous for reasons explained in the essay. The editorial team of D+C/E+Z is in touch with the author.
euz.editor@fazit-communication.de