The disease burden of African countries has been reduced considerably since the World Health Organization (WHO) launched the Expanded Programme on Immunisation (EPI) in 1974. This essay assesses some of the major achievements as well as the political and technological background.

last contributed to D+C/E+Z in spring of 2022 as a senior research officer who works for the Vaccines for Africa Initiative (VACFA) at the University of Cape Town’s School of Public Health and Family Medicine.

last contributed to D+C/E+Z in spring of 2020 as a member of the VACFA team. He directs the paediatric HIV clinical services at Groote Schuur Hospital and is senior lecturer in paediatrics at the University of Cape Town.

last contributed to D+C/E+Z in spring of 2020 as a professor of medicine at the University of Cape Town and as director of VACFA. The Initiative conducts evidence-based research aimed at strengthening African immunisation programmes. 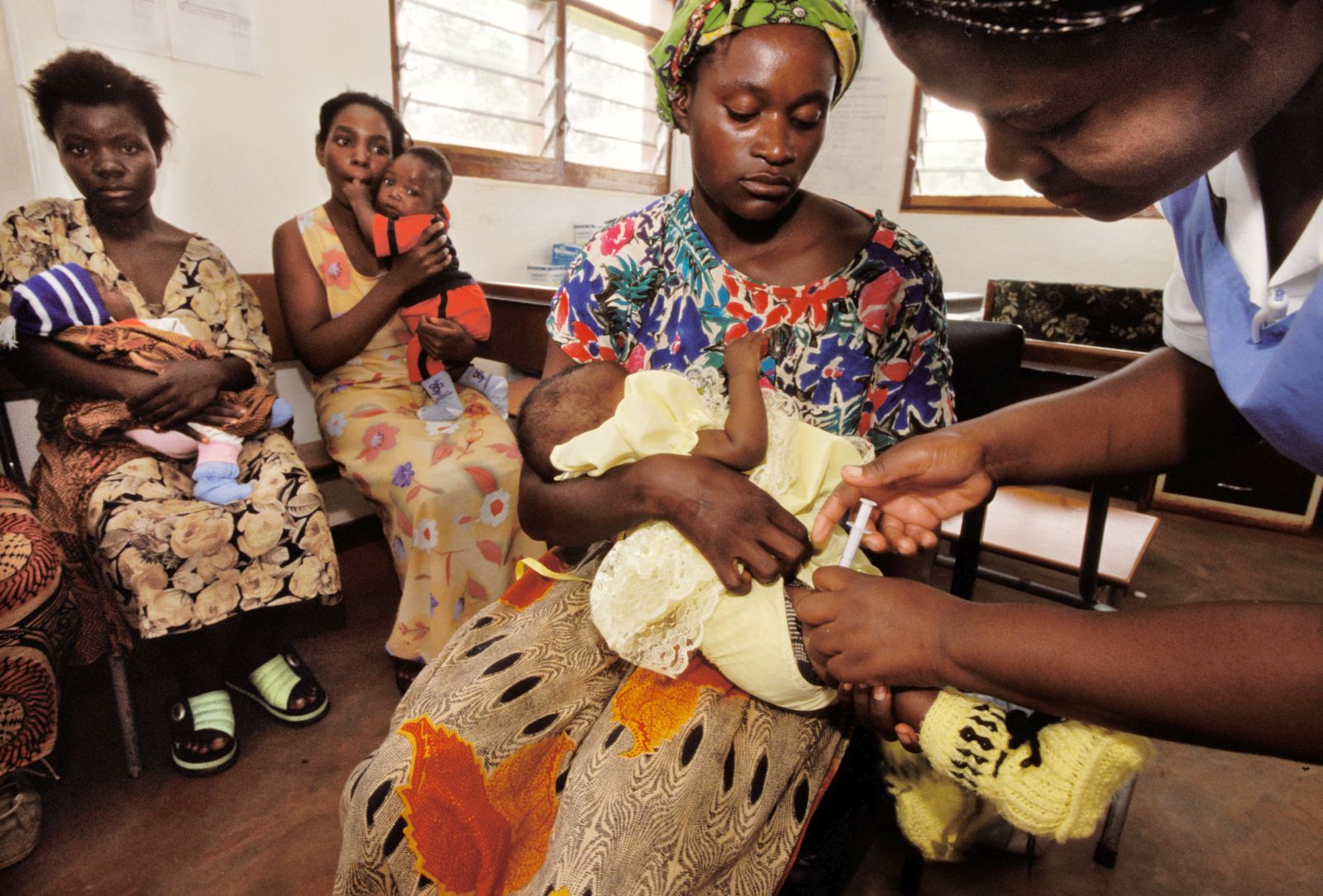 In Africa, EPI is credited with the control of several infectious diseases such as polio and measles. Success, of course, depends on the efficiency and competence of national institutions, which can be negatively affected by political instability and other issues.

A nation’s immunisation coverage is typically measured by the share of infants who get the third dose of the DPT3 vaccine, which protects people against diphtheria, pertussis and tetanus. Immunisation coverage among African countries has significantly improved since EPI was initiated. In 1974, less than five percent of African children got the necessary three doses of DPT3. By 2000, coverage had reached 52 %, and it further increased to 76 % by 2015. Moreover, measles deaths have declined significantly too. New life-saving vaccines have been introduced with enormous benefits. In South Africa, for example, hospitalisation of children under the age of five was reduced by 60 % within a year of rotavirus vaccine introduction.

The best result, however, is that some serious health risks have been eliminated or are about to be eliminated soon. The first big triumph was the eradication of smallpox. The last known natural case of smallpox was reported in Somalia in 1977, and the WHO declared the world to be free of this disease in 1980. The lessons learnt from smallpox eradication have helped to improve EPI effectiveness. Important points are that:

More generally speaking, capacity building, political commitments, international cooperation and adequate resource mobilisation are necessary. To deliver results, health systems must be designed properly and managed well. Maximum benefits of vaccines are only seen with high immunisation coverage at all levels: district, provincial, national and within a world region.

In the meantime, poliovirus has almost been eradicated. Three types of wild poliovirus (WPV1, WPV2 and WPV3) were responsible for millions of paralyses and deaths among children before the launch of the EPI. Dramatic reductions of polio-induced paralysis were immediately observed due to improved polio immunisation. Nonetheless, polio still paralysed over 1,000 children per day in Africa in the late 1980s. Since 1999, WPV2 has been eradicated. WPV3 was last reported in 2012. From 2014 to 2015, not a single wild polio infection was registered in Africa. However, an outbreak of WPV1 was last reported in August 2016 in Nigeria.

Polio immunisation is tricky however. The traditionally used vaccination (trivalent oral polio vaccine – tOPV) contains a weakened, but live WPV2 virus. In rare occasions, it mutates and causes vaccine-derived polio. The vaccine-derived polio mostly happens in under-immunised populations. In 2017 and 2018, a few such cases were reported in Somalia and the Democratic Republic of the Congo (DRC). Better vaccines are available today, and tOPV is being phased out, so Africa looks set to eradicate polio.

Maternal and neonatal tetanus (MTN) used to kill several thousand children in Africa every year. Infections mostly occur when child birth is not attended properly and can be prevented by a vaccine. By January 2018, 43 of Africa’s 54 countries had eliminated this disease. Immunisation programmes and better access to health care are making a difference.

The fight against meningitis is also advancing promisingly. There are different types of the meningococcal bacterium around the world, and a specific type (meningococcal A) has historically caused thousands of deaths in sub-Saharan Africa. Worst affected are the 26 countries in the so called “meningitis belt” from Senegal to Ethiopia. They witness periodic epidemics every few years. A major outbreak in 1996/97 led to some 25,000 deaths, killing about 10 % of the infected people. In response, African governments declared prevention of this disease a top priority.

They got support from international partners, including the WHO, the Bill and Melinda Gates Foundation and the US Centres for Disease Control and Prevention among others. The Meningitis Vaccine Project was created, and the Serum Institute of India (SSI) embarked on the vaccine development. It managed to produce MenAfriVac® at the price of $ 0.50 per dose. This price had been set by the African health ministers. This was the first vaccine to ever be developed specifically for Africa.

MenAfriVac® was introduced in the belt in 2010. By 2017, over 270 million people were immunised. The impact is huge. Reports indicate that meningitis cases due to the type A bacterium have been reduced by 99 % in the 21 countries that are using the vaccine. It is projected that more than 400 million people will be vaccinated with MenAfriVac® by 2020 – and this will translate into the prevention of 1 million cases of meningitis A. That means that about 150,000 deaths and 250,000 cases of severe disability will be avoided.

What led to success

International cooperation was proved essential in many ways. Indeed, multilateral programmes have often triggered African action. That was not only the case with the EPI. There are several other programmes worth mentioning:

In the context of GVAP, world leaders – including those from Africa – committed to obtaining 90 % national immunisation coverage by 2020. To achieve this target, African leaders adopted the Regional Strategic Plan for Immunization (RSPI) in Addis Ababa in 2016. It is commonly referred to as the Addis Declaration on Immunization (ADI). Its goals are quite ambitious.

For obvious reasons, resource mobilisation is a crucial challenge at national, regional and global levels. A significant development in this regard was the establishment of the Global Alliance for Vaccines and Immunization (GAVI). GAVI was launched in 2000, with a $750 million donation from the Bill and Melinda Gates Foundation. African countries, however, bare part of the immunisation costs.

To promote the acceptance of immunisations, a growing number of countries has been celebrating the African Vaccine Week since 2011. At the technical level, cooperation on disease surveillance has made considerable progress. In 1998, decision was made to set up the Integrated Disease Surveillance system in Africa. Moreover, disease-specific surveillance networks have been initiated. The Africa Rotavirus Surveillance Network is an example. It was established in 2006 to provide reliable information on the region’s disease burden and facilitate evidence-based decision making.

Scientific research is indispensable. To maximise the benefits, we must scrutinise the evidence. This is a technically demanding challenge, not least because it includes assessing trial of innovative methods. Research on vaccine preventable diseases in the region has shown an upward trajectory from 1974 to 2017. Impressively, the research generated in the region is focused on the diseases that are on the priority list to the continent.

Despite these key developments and successes, Africa is far from attaining the full benefits obtainable by best use of the existing vaccines. Immunisation coverage remains below the target of 90 %, and funding for the life-saving vaccines is heavily reliant on GAVI. More needs to happen. Improved funding and more commitment from the national governments in the region is crucial. More research on the immunisation challenges and the associated solutions is needed.

Benjamin M. Kagina is a research officer and vaccinologist with the Vaccines for Africa Initiative (VACFA) at the University of Cape Town’s School of Public Health and Family Medicine. VACFA conducts evidence-based vaccinology research aimed at strengthening the immunisation programmes in Africa. Since 2005, VACFA conducts an annual African vaccinology course to build human resource capacity on immunisation in Africa: about 1,000 Africans working in the field of immunisation have trained in the course as at 2017. VACFA also cooperates with the WHO and other stakeholders on training members of the National Immunisation Technical Advisory Group in various African countries.
benjamin.kagina@uct.ac.za

Rudzani Muloiwa directs the paediatric HIV clinical services at Groote Schuur Hospital and is senior lecturer in paediatrics at the University of Cape Town. He belongs to the VACFA team.

Gregory D. Hussey is the director of VACFA and a professor of medicine.