Who cares about the constitution?

In Honduras, the constitution only allows presidents one single term, so the word ­“re-election” is a contradiction in itself. Nonetheless, Juan Orlando Hernández keeps ­telling people he wants to be re-elected. The country’s democracy is seriously damaged, and he might put an end to it, should he ­prevail.

last contributed to D+C/E+Z in spring of 2019 as a social anthropologist. She worked in Honduras for the German development organisation DED and has been active in Honduran human-rights work since 2011. 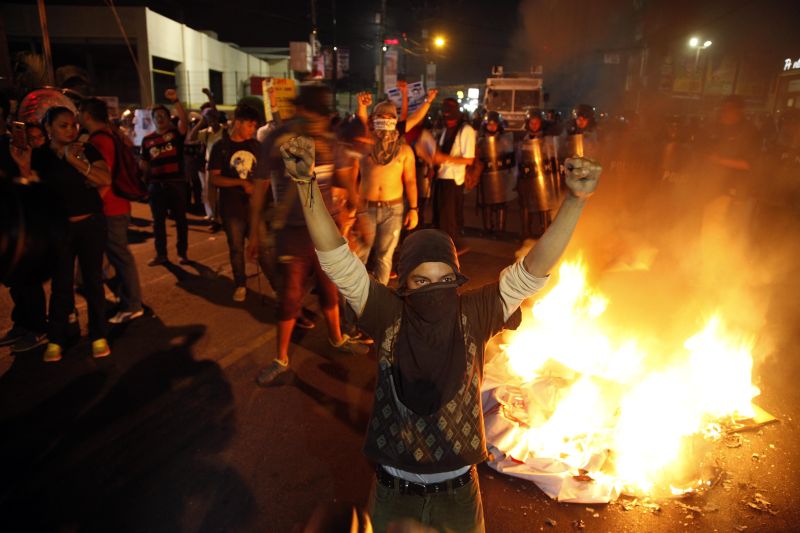 After dark years under military dictatorship, Honduras adopted a new constitution in 1982. The re-election of a president was ruled out for ever. Most of the constitution, however, was not adapted to democratic requirements, so the need for further reforms remains considerable.

National elites heard alarm bells ringing when Manuel Zelaya, a leftist president, announced a referendum on convening a new constituent assembly. They assumed that he intended to run for office once more, and this became the pretext for a coup.
Ever since, the National Party has been ruling with an iron fist. In 2012, it breached the constitution once more. The Congress fired five Supreme Court judges who had dared to rule against recent legislation. Who cares about the constitution anyway? In this context, it is no surprise that Hernández is quite outspoken about “re-election”.

To bypass the constitution’s crucial Article 239, his party is using flimsy legal arguments. Isn’t it allowed to discuss re-election? Is it a criminal offence when a president declares he wants to be re-elected? And does the constitutional rule, that a president may only serve for one term, really conform with the constitution itself? The Supreme Court had to tackle these questions – and, in line with what those in power wanted – it decided that Article 239 breaches norms of international human rights.

This judgement is paradoxical and undermines democracy in a most dangerous way. The constitution is a democratic nation’s supreme law, and it is the duty of its top judges to uphold it. The Supreme Court of Honduras, however, has ruled that a part of the constitution is unconstitutional. Who is to be trusted if the very institution that is in charge of safeguarding the constitution casts doubt on it? Crucial pillars of democracy are at stake, including the separation of the judicial, legislative and executive branches of government. Under Hernández, it has become more evident than ever that the courts are not independent in Honduras. Should he win the next elections, he would be free to establish autocratic rule.

The debate on re-election is ridiculous, especially if one considers the coup in 2009. Its leaders argued that it would be unconstitutional to re-elect Zelaya. It is now obvious that they were not worried about re-election in principle, but only about who was hoping to be re-elected. Unlike Zelaya, Hernández enjoys the support of the country’s truly powerful elites. He has reinforced the military and made Congress pass laws that benefit the elite of oligarchs.

Hernández, of all people, is now saying he needs more time to introduce reforms. His track record in office is poor. In a corruption scandal of unprecedented dimensions, his party abused national social-protection funding worth $ 350 million for election-campaign purposes. As a result, government-run hospitals suffered a severe crisis, and about 3000 patients died because of a lack of pharmaceuticals.

The human-rights scenario is awful. Nowhere on earth are so many environmental activists murdered as in Honduras. Lawyers’ lives are not safe either. In terms of press freedom, Honduras ranks 137th of 180 countries. Violence and increasing militarisation stand in the way of democratic development. As demanded by the USA, Honduras is fighting drugs – but so far, the results mostly prove that the government, the police and the armed forces have close links to drug gangs.

There are no more legal means to prevent the re-election of Hernández. Only broad-based popular resistance or opposition from the USA can stop him, and it does not look as though President Donald Trump is interested in doing so. Honduras needs the rule of law, separate branches of government and a fully-operational multi-party system. Democracy might help the country to overcome poverty, violence and human-rights abuses.

Rita Trautmann is a social anthropologist. She has worked for a German development agency in Honduras and is now involved in human-rights activism.
trari@protonmail.com
Blog: http://hondurasdelegation.blogspot.de/search/label/Delegation2016