Security and development are the two, mutually interdependent foundations of lasting peace. Security requires successful development, and development is impossible without security. This relationship should be reflected in the coordination of civilian and military approaches to solving international crises.

contributed to D+C/E+Z in winter 2017/2018 as the director of Konrad-Andenauer-Stiftung’s Security Policy Programme in sub-Saharan Africa. He is a reserve officer in the Bundeswehr with the rank of major. 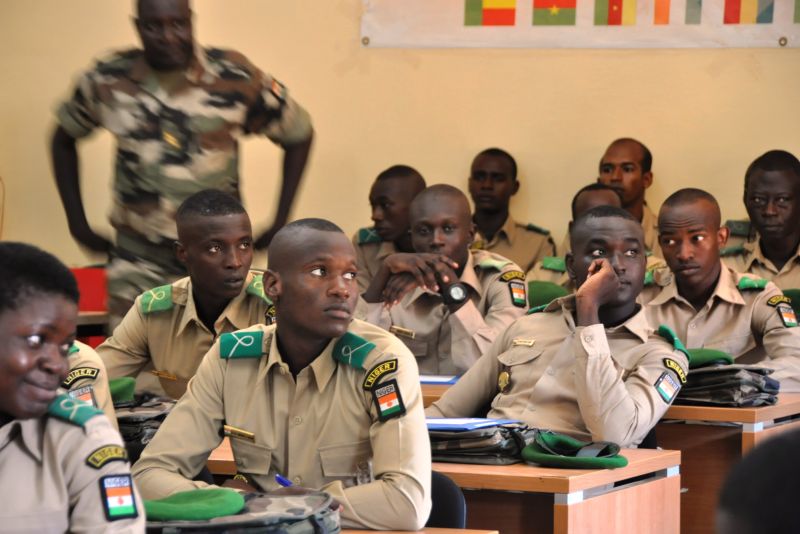 Weibezahl Soldiers of Niger attend a seminar held by the Konrad-Adenauer-Stiftung in Niamey.

In Germany, there is a notable lack of trust between the Bundeswehr and civilian development actors. That is partly due to German history. After the Nazi dictatorship, it was impossible to view German military involvement abroad in a positive light. Public perceptions were shaped by Nazi militarism and the atrocities committed in Germany’s name. Furthermore, during the Cold War, the Bundeswehr’s responsibilities were limited to national defence.

For many decades, moreover, international-development agencies paid little attention to security issues. There were rather few points of contact between the military and aid organisations. To some extent, both sides are still working alongside one another, rather than with one another. The problem is exacerbated by mutual resentment, which does not originate in the target country, but is rooted in the competition of Germany’s Federal Ministry for Defence on the one side and the Federal Ministry for Economic Cooperation and Development on the other. Both sides tend to disparage the expertise of the other, especially when it comes to the federal budget. This tension is currently on display in discussions concerning the NATO goal of each country devoting two percent of its gross domestic product to defence and the UN target of committing 0.7 % of gross national income to official development assistance.

The Bundeswehr is a model case of a democratically controlled military. The Federal Government is a civilian administration. It commands the armed forces. Any military operation abroad must be authorised by the Parliament and justified to the public on a case-by-case basis. The military is a tool at policymakers’ disposal, not a constituency that the government caters to. At the same time, German policymakers who deal with foreign, security and defence affairs appreciate the Bundeswehr’s expertise and advice.

Since the end of the Cold War, Germany has been assuming more responsibility for maintaining international security. Public discourse is increasingly shaped by the rising numbers of refugees (particularly from Africa), the USA’s partial retreat from global interventions and the perception of the number of armed conflicts increasing internationally. Two decades have passed since the Bundeswehr carried out its first foreign mission in Kosovo. Nonetheless, Germans still seem unaware of the need for their country to take on a new role on the world stage.

Shortly after taking office in December 2013, Ursula von der Leyen, the federal defence minister, spoke out in favour of a stronger German military presence in Africa. The reasons were primarily altruistic. She said in an interview: “From a purely humanitarian perspective, we can’t look away when murder and rape occur daily.” Almost simultaneously, at the 2014 Munich Security Conference, Joachim Gauck, then federal president, argued forcefully that Germany must assume more military responsibility in conflict regions. His views were endorsed by Frank-Walter Steinmeier, who was foreign minister at the time and has since succeeded Gauck as head of state.

Their stance earned praise from international partners, but the reaction at home was mixed. Politicians and scholars responded positively, but the majority of the people are opposed to additional Bundeswehr missions. In a survey of January 2014, 45 % of respondents said that the German military was already doing too much and 30 % thought that the current level of engagement was “just right”. At the time of the survey, some 5,000 German soldiers were deployed abroad, the overwhelming majority of them in Afghanistan. The current number is slightly over 3,500.

Justifying military operations as being in the nation’s own security or economic self-interest is not well received in Germany. Former Federal President Horst Köhler had to resign after saying on a flight back from Afghanistan that, in emergencies, “military deployments are necessary to protect our interests – for example with regard to trade routes”. This statement unleashed a storm of protest.

To an ever growing extent, European security is indirectly being threatened by the civil wars and crises that haunt Africa, for example. Refugee movements lead to illegal migration. Terrorism and organised crime find safe havens in areas where states have failed. It is in Europe’s self-interest to protecting Africa’s natural resources and the livelihoods of the people there. The multifaceted challenges cannot be tackled in isolated measures and the response cannot be primarily of a military nature. Developmental, diplomatic and military efforts must be designed and implemented in a coherent and coordinated fashion.

This is the lesson of the past ten years, and it has shaped Germany’s responses to recent international crises to a considerable extent. In Mali, for instance, development measures are being used to supplement the EU’s military training mission (EUTM Mali), in which German soldiers are playing a significant role (please note comment by Julia Egleder). The UN stabilisation mission MINUSMA combines the services of soldiers, police and civilians. While the Bundeswehr is contributing to the stabilisation of the country and building capacity in the armed forces, Germany’s development agencies are providing support for state structures all the way down to the municipal level. Moreover, they are helping to improve the people’s prospects. In Berlin, the relevant ministries are continuously coordinating their activities.

The role of the military in up-to-date security policy must not be limited to deploying soldiers for stabilisation or intervention missions. It must extend beyond military capabilities. The expertise and relationships that the Bundeswehr has built over decades of collaboration with security forces in developing countries should inform policymaking in foreign, security and development affairs. An interdisciplinary approach is needed. We need long-term cooperation instead of the silo-mentality that is still all too prevalent in Germany’s military, government agencies and non-governmental organisations.

In many countries in sub-Saharan Africa, the security sector is not fulfilling its duties. As a result, states can neither enforce the rule of law nor guarantee security. The lack of fully operational and democratically-controlled state power is painfully obvious. Accordingly, people often do not trust their country’s security forces, perceiving them as a threat, rather than a stabilising factor. Depending on country and region, crimes committed by the armed forces range from corruption and plundering to the abuse of human rights and even outright acts of terror. All too often, the political elite uses the security forces to further personal or political goals. Such behaviour thwarts economic development.

For a long time, German organisations considered development cooperation with security forces virtually impossible. The truth, however, is that well-considered institutional cooperation can contribute to significantly improving matters – both with regard to the security forces themselves and their relationship with the general public. This is especially so when cooperation is not limited to strictly military issues. Therefore, the Bundeswehr and civilian German agencies have been involved in actively supporting security-sector reforms in various countries.

Instruments of choice include advice on the wording of laws concerning military matters and training for soldiers, police and officers for example. It is necessary to raise awareness of the role of security forces within a democracy and the role of women in the army and police. Members of the security forces must become “citizens in uniform”, with an emphasis on the first term. Everyone benefits when Germany’s Bundeswehr, government agencies, foundations and non-governmental organisations cooperate closely on these matters.

Tinko Weibezahl is the director of Konrad-Andenauer-Stiftung’s Security Policy Programme in sub-Saharan Africa. He is a reserve officer in the Bundeswehr with the rank of major.
tinko.weibezahl@kas.de