Let’s race to the top

Civil-society organisations regularly accuse the Asian Development Bank (ADB) and other international financial institutions of only insufficiently protecting the environment and the rights of poor people – but they consider national governments an even bigger problem. 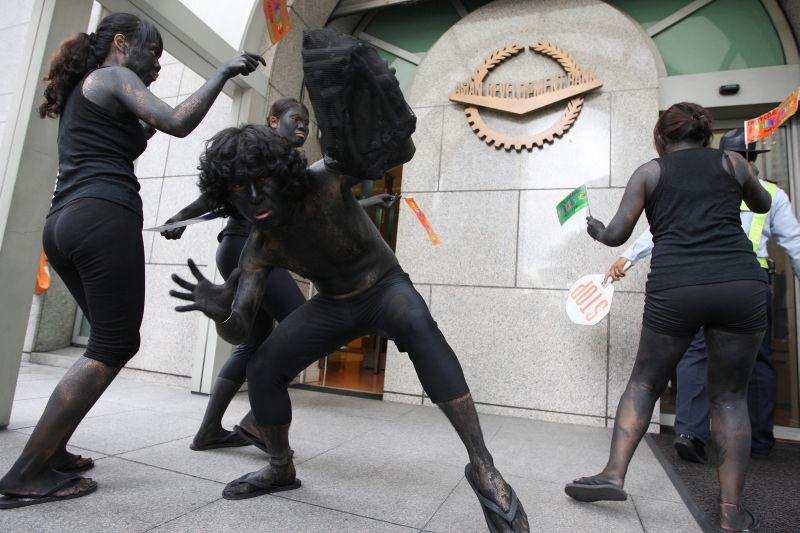 Dela Pena/picture-alliance/dpa In front of the ADB headquarters, Greenpeace protesters expressed discontent with funding for coal-based power infrastructure in 2012.

Building infrastructure is the core component of the ADB’s mission. Civil-society activism has contributed to improving the Bank’s social and environmental safeguards over the years. Today, activists are not calling for more stringent rules, but for more stringent implementation.

In a similar vein, the activists appreciate the work of the Bank’s Compliance Review Panel (CRP), to which people can turn when ADB rules are not followed. However, they bemoan that victims of forcible displacements, for instance, are often not compensated even when the CRP rules in their favour. They warn that things may deteriorate because, due to recent decisions, the CRP’s mission no longer includes proposing remedial action in cases where ADB rules were breached.

When these matters were discussed at the ADB’s annual meeting in Frankfurt in May, leading Bank officers agreed that there was room for improvement. In their eyes, however, ADB jurisdiction is limited because the governments of the countries where projects are implemented are not under its control. Expressing themselves in favour of strengthening the rule of law everywhere, they suggest that non-governmental organisations can help the ADB reach out to marginalised people and engage in the fight to ensure the rule of law.

Civil-society activists, in any case, are resolute about preferring ADB safeguard systems to those of the countries concerned. They point out that the latter are less stringent. While ADB rules give the public 120 days to comment on an environmental impact assessment, for example, Indonesian law foresees a mere 10 days. Moreover, they bemoan that many Asian governments do not obey their countries’ laws. ADB officers agree that the ADB system is stronger and thus preferable.

The Asian Infrastructure Investment Bank (AIIB) and the New Development Bank are adding to NGO worries (see Korinna Horta in our D+C/E+Z e-Paper 2016/03, p. 17). Both new multilateral banks are based in – and backed by – China. Its leaders express commitments to international standards, but what kind of safeguards and compliance mechanism they will use is not clear. NGOs worry that there will be an international downward spiral. The response of Mario Sander, who represents Germany, Turkey, Britain, Austria and Luxembourg on the ADB board, is that he hopes there will be “a race to the top”.