A trend towards ­organic fish

Organic aquaculture, or the rearing and breeding of fish and other marine animals according to organic standards, is growing in Brazil. One reason for this trend is the increasing popularity of organic food with consumers.

contributed to D+C/E+Z in summer 2015 as the president of Welfare Institute (IBEMBRAZIL) and of the Organic Livestock Commission of the Brazilian Society of Veterinary Medicine and as a member of the Animal Husbandry Alliance of the International Federation of Organic Agriculture Movements (IFOAM). 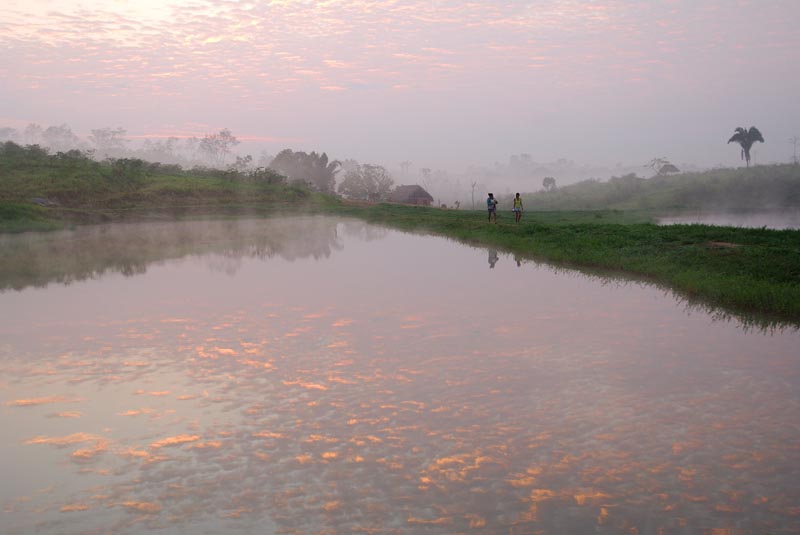 Lorgnier/Lineair Fish breeding ponds in Brazil: Aqua­culture has been spreading here since the 1990s.

In the mid-1990s, Brazil began significant advances in aquaculture techniques – not merely relying on  wild-caught anymore. There has been an enormous expansion of industrial shrimp farming in northeast Brazil, which is presently a practice of great economic prominence in the sector. Another notable expansion has occurred in the cultivation of oysters and mussels in the southernmost region of the country, in the state of Santa Catarina, with increases in spaces designated for freshwater fish farming and in scientific research that focuses on improving cultivation for the sale of Brazilian fish.

In industrial aquaculture, artificial feed and ­other products are used to maximise production; however, the effluents can harm the ecosystem if ­released into the environment without proper treatment. Additionally, the use of synthetic chemicals can leave residues in the animals and harm end-consumers. This is why organic production has been gaining popularity. It is a way to maintain the quality of the fish without altering the environmental balance.

Therefore, organic fish farming is becoming ever more popular in Brazil. Organic cultures are free of pesticides, antibiotics, deworming agents, hormones and genetically-modified organisms. This kind of farming results in fish of higher quality. Organic aquaculture protects biodiversity, preserves natural resources and does not cause any environmental damage and produces food free of artificial chemical residues.

In 2011, Brazil established criteria for organic aquaculture. The standards encompass environmental and social requirements for producers, measures to promote animal welfare and rules regarding production equipment. At the moment, two aquaculture companies (Primar and Aquacrusta) are officially certified as organic in Brazil, although there are various initiatives in different places throughout the country.


The first conversion to organic production

Primar was the first firm to convert from conventional Brazilian aquaculture to the organic system in 2003, following the guidelines of IFOAM, the International Federation of Organic Agriculture Movements. Brazilian standards had not yet been established.

Located in the state of Rio Grande do Norte in northeast Brazil, Primar has close to 40 hectares of fish ponds and was a pioneer in the industrial cultivation of the marine shrimp Litopenaeus vannamei. Previously, the firm practiced the monoculture of this species in excavated tanks. The conversion process lasted one and a half years, with first certification in 2003.

In addition to shrimp, Primar now raises oysters and fish in polycultures. This means that two or more species of aquatic organisms are reared in a single enclosure. The breeding ponds have been designed to resemble the animals’ natural ecosystem as closely as possible. This method reduces stress, increases survival rates and makes the animals less susceptible to disease.

Primar also uses a low-density system, meaning that the shrimp have enough space to move freely. This system improves the taste and texture of their meat. Microalgae and crustaceans live on the bottoms of the ponds and provide food for the shrimp. Thanks to this natural source of nutrition, organically farmed shrimp taste very much like their wild counterparts and very different from conventionally farmed shrimp. With the intention to stimulate fairer commerce, in 2004, Primar began selling directly to residential consumers, restaurants, hotels, and events. The price differential for the organic product enabled the company to rise to the business challenges of compensating for the new system’s initially reduced productivity, research expenses, building facilities for new species and changing the cultivation systems.

Aquacrusta is also located in northeastern Brazil, in the state of Ceará. The region is a true tropical treasure: a protected area with a natural wealth of nutrients and organic sediments. Aquacrusta breeds Pacific white shrimp in harmony with nature. Every step of the production process is carried out at its 400-hectare facility, from the release of eggs to larval rearing to fattening. The company has been producing shrimp since 1983 and converted to organic breeding methods in 2010. Aquacrusta invested a great deal in research in order to develop clean technologies and management methods that strike the right balance between socially and ecologically responsibility.

Larval rearing is the core of its production. Aquacrusta’s farm has a capacity of 150 million postlarvae – the developmental stage prior to fattening – per month. Thanks to strict quality controls and biologically compatible water treatment, these animals are free of disease. The shrimp are fished at night at low temperatures, and then subjected to a heat shock. This is a fattening method that does not require the use of chemicals. Finally, they are processed, sorted, packaged and stored in cold storage rooms.

One of the biggest challenges that organic breeders face is securing an adequate supply of organic feed. It is difficult and expensive to manufacture feed without genetically-modified ingredients because soybeans and corn are typically cultivated using genetically-modified seeds in Brazil. However, some experiments have shown that feed for the fish can also be manufactured from wheat instead of corn.

Similar research is being done to replace forbidden synthetic chemical medicines. For instance, numerous scientific studies have shown that various species of plants are effective against fish parasites. Good results have been achieved with pine-bark extract from the genus Pinus, garlic, papaya seeds, onions and Chenopodium. The latter is particularly effective against fish nematodes. In tests, it killed about 92 % of nematode eggs. Several experiments with homeopathic products also had positive results: they served to effectively treat fish parasites, decrease stress and promote feed conversion.

Brazilian consumers are becoming more and more open to organic food. Brazil is the country that most uses pesticides in the world, and this is starting to concern Brazilians and raising their interest in organic products. In a study published last year, researchers from the Federal University in Rio de Janeiro surveyed people who were shopping for freshwater shrimp. The researchers found that a sustainability seal had a positive effect on consumers’ purchasing decisions.

Angela ­Escosteguy is the president of Welfare Institute (IBEMBRAZIL) and of the Organic Livestock Commission of the Brazilian Society of Veterinary Medicine and a member of the Animal Husbandry Alliance of the International Federation of Organic Agriculture Movements (IFOAM).
angelaibembrasil@gmail.com