Why “slow politics” may make a difference in India

In the first part of this story, our South Indian correspondent Krupa Ge wrote about why Rahul Gandhi of the Congress Party has embarked on a long march across India. It is called the Bharat Jodo Yatra. The idea is to confront the aggressive divisiveness of the ruling Hindu-supremacist BJP with popular outreach and a display of humility. In the second part, she shares what she experienced joining the march for a day.

contributed to D+C/E+Z in the spring of 2020 as a Chennai-based journalist. 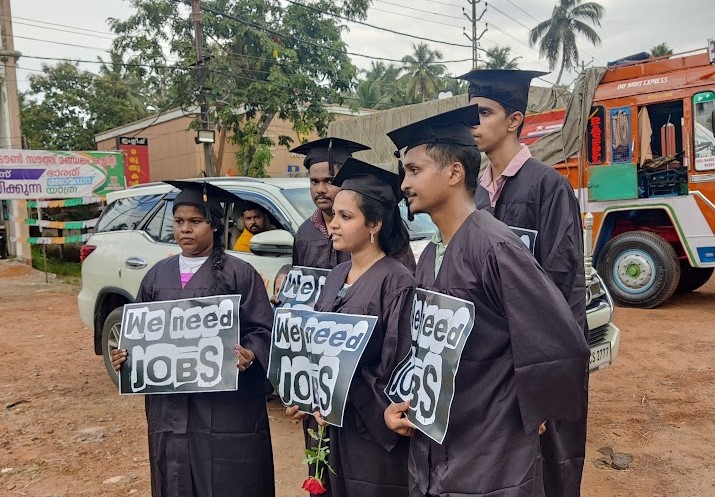 I climbed down the steps of the mosque in Karunagappally and joined the march. It moved at a shocking pace (see my previous post on www.dandc.eu).

Whenever I stopped to photograph some folk artists or unemployed youngsters dressed in their graduation gowns, the leading group left me behind. I tried to keep up for a while, but that was impossible given that I wanted to pay attention to what was going on around me. I steadied my pace and took time to take photos and videos.

On the walk, I met all kinds of people. Party workers, children and old men who seemed too weak to walk but nonetheless kept walking. There were women dressed in the traditional clothes holding roses in their hands which they hoped to hand to Gandhi at some point. There was sloganeering, flag waving, some dancing and lots of music.

No anger, no hate

What was absent entirely was anger and hate. And that seemed to be by design. The yatra felt like a safe space, so it was even more inviting to everyday women and children. Normally, this kind of party-led political event mostly attracts male activists and perhaps a few female party workers. Rahul Gandhi’s Yatra, however, looked more and more like a real mass movement. Hundreds of people waited along the sides of the roads to greet this moving mass of humans. And more people kept joining the march. I lost track of the head and tail of this long rally and simply became part of it.

Rahul Gandhi had succeeded in giving abstract terms such as “unity”, “brotherhood” and “peace” a tangible form. People were putting one foot in front of another, even as they became breathless and the soles of their feet began to feel hot. As the hours approached noon, the temperature rose. People did not complain about sweating however. We all rose to the challenge in a spirit of solidarity.

It was good to experience togetherness in this manner – and it was very different from the aggressive identity politics of our current Prime Minister Narendra Modi’s Hindu-supremacist party BJP. (In 2019 book, “Malevolent republic”, the Indian journalist K.S. Komireddi did an excellent job of both assessing this matter and elaborating the decades-long decline of the Congress Party (see review by Hans Dembowski on www.dandc.eu). Gandhi now needs to not only defeat the BJP’s machinery of hate, but also help build his own party, whose organisational structure has been weakened across the country, after successive losses.

A kind of time travel

On the walk, I felt I had returned to an India that has long been presumed dead. It made sense once more to speak about togetherness and consider co-existing in the public. Smiling, hugging and speaking calmly felt normal again.

Local Congress activists beside me chanted: “Bolo bolo, Bharat jodo” (Say it loud, say it loud, India unite). They told me they were very happy he was walking in their state, and that the local party unit had become more assertive in the “reply attacks”, with which it responded to aggressive propaganda of the ruling Hindu-supremacist party BJP.

After about 12 kilometres, the morning leg of the yatra ended. Everyone needed a break. Many were nursing blisters on their feet. Rahul Gandhi, however, met unemployed youth to discuss their problems.

The experience was exhilarating. Some of the yatris (the people accompanying Gandhi for a longer stretch or even all the way from Tamil Nadu to Kashmir) are prominent members of parliament, former ministers or current state-level leaders. We know them from TV, but here they were accessible. During the break, they were sitting around as if it was the end of a college festival. However, they would get up again in a few hours and walk for another 12 kilometres or so. And for some of them, that is the agenda for 155 days.

The view of Sachin Rao, a prominent party member

In a quiet corner of the auditorium where everyone rested, Sachin Rao, shared some of his thoughts with me. He is a former member of the Congress party’s Central Working Committee, its highest decisionmaking body and plans to walk for most of the 3500 kilometres with Gandhi. He told me: “I keep getting asked on the road if I am walking all the way to Kashmir. When I say yes, people say ‘Thank you’.” He said he had not expected people to do so.

I asked him about the ideological and spiritual connotations of this walk. Rao said that the yatra was more a practical exercise than a religious ritual. Such a long journey, he said, requires one to leave one’s home and forgo its comfort and protection. “When you walk like this, you are subjecting yourself to physical and mental duress. That process practically brings you closer to the nature of your needs. You come up close to the ghosts inside yourself.”

Was the long walk intended to show the Congress Party as a younger, stronger party, with persons who can walk such a tremendous distance? Rao’s response was that even the strongest person was whimpering after the first two days. A yatra demands dedication, though stamina and determination grow as the journey winds on.

The force of slow politics

Many people in India are opposed to the right-wing Modi government but doubt the Congress can bring change. Whether the yatra will make a lasting difference remains to be seen. Those currently in power, however, clearly do not know how to respond to the major opposition party’s embrace of a slow politics. They are experts in manipulating and monopolising narratives, but so far they have failed to claim for themselves the political and spiritual symbolism of the yatra.

Is the slowness unsettling the party in government? Rao said, “The yatra is directed at the people, not the party in power.” Will it then unsettle our people and shake them from their current sense of society?  Rao was cautious in his optimism: “I hope so.” The idea was to show that “big change requires big efforts.” He also reflected on “the total collective loss of our understanding of India”. Politics, in his eyes, has been reduced to a theatrical performance.

The Congress last ran India’s central government from 2004 to 2014. In Prime Minister Manmohan Singh’s first term, it passed important legislations. In particular, the Mahatma Gandhi National Rural Employment Guarantee Act (MGNREGA) made a big difference in some of India’s poorer regions. As expected, the party handsomely won the general election of 2009.

During the next five years, however, the Congress lost most of its goodwill. Its worst blow came from the government’s own audit body which alleged that there was massive corruption scandals. The party did not have another economic reform like the MGNREGA in its kitty to neutralise the negative publicity either. It thus became an easy target for Modi’s aggressive identity politics.

If it wants to become competitive again, it certainly has a long way to go – and Rahul Gandhi’s way of doing exactly that – step by step for 3500 kilometres – may indeed end up slowly changing people’s perception of him and the party he is associated with.