Successful cooperation between development researchers and practitioners who work for development agencies, translates into better policies and more effective policy measures. A recent survey conducted by PEGNet (the international Poverty Reduction, Equity and Growth Network) shows that researchers are interested in more cooperation, expecting benefits for their own as well as the practitioners’ work.

last contributed to D+C/E+Z in autumn 2016. She works for GFA Consulting Group and is also a postdoctoral researcher at the Kiel Institute for the World Economy. 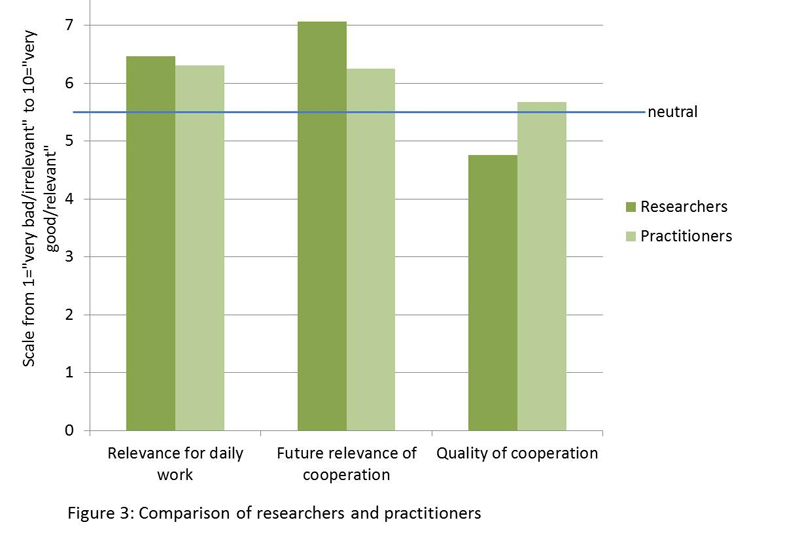 The survey was done among devel­opment researchers that belong to PEGNet with a focus on Germany. On a scale from 1 ("not interested at all") to 10 ("very interested"), the average indicated interest in closer collaboration was 8.4, with 44 % of the 145 respondents opting for 10. More cooperation was estimated to be especially valuable for evaluating projects, designing of projects and programmes and for drafting policies. At the same time, the researchers were ambivalent about the quality of current cooperation. On a scale from 1 ("very bad") to 10 ("very good"), their average response was 4.8. By contrast, they rated the relevance of cooperation with practitioners at 6.5 on the same scale.

From the researchers’ point of view, the most relevant obstacles to closer collabo­ration with practitioners are:

Researchers have to publish their results in high-ranking journals that address the scientific community. One consequence is that non-academics often struggle to understand their scholarly jargon. Development practitioners, on the other hand, want quick and easy solutions. Solid research, however, tends to take longer than practitioners are willing to wait. In addition, the lack of opportunities for communication and networking are considered obstacles.

The survey also revealed what researchers think are the pillars of good cooperation. Success, according to them, is made more likely by:

Respect, in the researchers’ eyes, include appreciation of their independence and their academic standards. Even in the context of joint projects, they demand this kind of respect. While they insist that they need precise terms and specialised jargon, demanding that practitioners have the ambition to understand, they also admit that they should do more themselves to translate their findings into practical language. They also say it would make sense to try to deliver more succinct messages.

Generally speaking, the researchers state that it would be useful to meet practitioners more often and more systematically, and not only in the context of joint projects. Meeting personally helps to share experience, generate new ideas and agree on best practices. In regard to joint projects, the researchers stress that all stakeholders should be involved at all stages. On the other hand, they would welcome clear feedback from practitioners on research findings.

Last year, PEGNet did a similar survey of German development practitioners (see Linda Kleemann and Marcus Böhme in D+C/E+Z 2013/09, p. 318). It is interesting to compare the results. One insight is that both sides value cooperation equally high, and both expect cooperation to become more important in future. However, researchers and practitioners judge the current quality of cooperation differently. Whereas researchers are dissatisfied with it, practitioners are neutral.

Asked about the main problems, both groups mention similar concerns: diverging objectives and interests, lack of communication and the mismatch of time frames. Practitioners state that they lack academic knowledge and do not have the time to read all relevant studies. Accordingly, they cannot use newly generated research knowledge for their work. Nevertheless, both sides would like to network more.

Several steps forward are imaginable. It would make sense to invest more in joint conferences, workshops and other exchange platforms. Specialised knowledge brokers could be employed by both sides. Alternatively, more frequent exchange of personnel would help to build bridges, boost trust and increase mutual understanding.