The Paris climate agreement not only contains ambitious goals to reduce greenhouse gas emissions. It also prioritises climate change adaptation. Most Nationally Determined Contributions (NDCs), especially those put forward by developing countries, include adaptation targets. The international community is called on to support their implementation.

last contributed to D+C/E+Z in the summer of 2017. She heads the GIZ project to support National Adaptation Plan processes in Benin and Senegal. 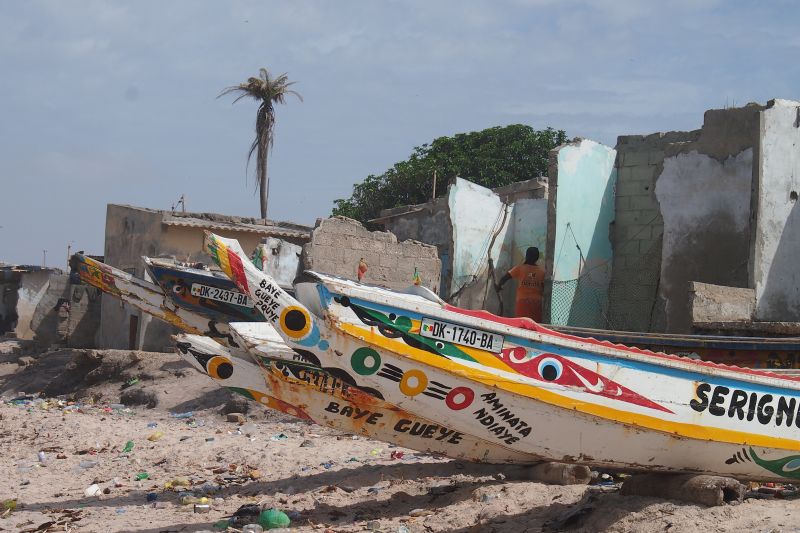 Bünner In the fishing village of Bargny in Senegal, the first row of houses along the coast was washed out and then broke away.

Climate change is causing serious, unavoidable consequences in many places around the world – a trend that will continue even if the ambitious goal of the Paris agreement to limit global temperature increases to 1.5 to two degrees Celsius by 2100 is achieved. Therefore the agreement places great importance on climate change adaptation.

The treaty attempts to spread the burden between rich and poor countries. Starting in 2020, industrialised countries will be expected to mobilise $ 100 billion a year for climate change mitigation and adaptation. Climate financing should contribute to a transformation of the global economy. What is being sought are structural incentives that will help reduce greenhouse gas emissions as quickly as possible and reduce the vulnerability of and risks to people and nature associated with climate change.

One important starting point are the adaptation goals that governments laid out in their NDCs for the Paris agreement. Experience shows, however, that the national environmental action plans or National Adaptation Plans of Action (NAPAs) of developing countries often relied too much on the mobilisation of international funding.

The systematic integration of climate change adaptation into the policies of all affected areas is often hampered by a lack of support at the highest political level as well as a lack of institutional capacities. Many countries also lack meaningful information about climate risks as well as the relevant experts. In addition, scientists, civil society and the private sector have so far had too little input into adaptation policy.

Since Paris, Germany has funded several international cooperation projects that aim to address this bottleneck. Germany’s federal government has focused in particular on promoting National Adaptation Plans (NAPs) that will help to meet the adaptation goals of the NDCs by systematically integrating climate issues in public investment programmes and other political processes. The support also hopes to achieve an appropriate division of labour between public policy and science. Such a division is precisely what determines whether societies find the necessary strength to take action.

Climate change as a cross-cutting issue

These matters are currently playing an important role in Senegal and Benin, which are among the least developed countries (LDCs). In both countries, extreme weather events have led to enormous economic damage and loss of life in recent years. Climate change is threatening to cause even more harm.

Rising sea levels and extreme weather events are also putting pressure on infrastructure and ecosystems. Some places that have experienced a tourism boom in recent years are now facing coastal erosion and losing sand beaches. Experts believe that climate change will further accelerate this process in future. Some hotels were forced to close. The loss of tourists also led to the closure of restaurants, small boutiques and handicraft shops that many people depended on. Fishermen also experience the impact of climate change first-hand when their houses are swept away by floods.

In its NDC, Senegal identifies the sectors in which adaptation measures are most urgently needed. With support from the United States Agency for International Development (USAID), an adaptation plan for the fisheries sector has already been drafted. Other sectors like tourism, water management, coastal management and agriculture still lack meaningful analyses of the effects of climate change. There is also a lack of the expertise and processes required for putting adaptation into practice.

This is where a project steps in, which is being carried out by the German Gesellschaft für Internationale Zusammenarbeit (GIZ) on behalf of Germany’s Federal Environment Ministry as part of the International Climate Initiative and in cooperation with the non-profit research institute Climate Analytics. The project provides support to the governments of Senegal and Benin to improve their ability to provide scientific analyses and strengthen national coordination structures to adapt to climate change.

Senegal already has a great deal of expertise and climate information. But the data sets that climate research depends on are often unreliable or distributed amongst many institutions, making them inaccessible. Since 2003, one committee has coordinated all the country’s climate policy processes, including the elaboration of the NDC and the adaptation plan for the fisheries. What began as an informal gathering has matured to a formal institution with a growing list of responsibilities that works across sectors and also involves scientists and environmental organisations.

This is already a step in the right direction. However, Emmanuel Seck from the non-governmental organisation ENDA Tiers Monde wishes that climate adaptation measures were systematically integrated into development planning. He believes that a great deal still needs to be done at the decentralised level in particular: “To date, very few regional authorities have territorial climate plans or local development plans that already take climate change into account.”

In order to ensure that climate change is addressed not only in specially developed adaptation plans, but also in other planning processes, the project is helping the Ministry of Economy, Finance and Planning to revise the guideline that informs the creation of sectoral development plans. The guideline is being expanded by several steps that are meant to integrate the consequences of climate change for all updated sectoral strategies.

Benin’s Ministry of Planning has also recently taken up climate change as a cross-cutting issue. For example, every year the ministry puts out an “Analytic Report” that evaluates the implementation status of current development plans and sketches ideas and challenges for the upcoming year. The report is sent to representatives from ministries and parliament who are part of the budget planning process. The “Analytic Report” for fiscal year 2018, which is currently being compiled, devotes a detailed chapter to climate change for the first time. As a result, the issue will receive more attention when decisions are made about allocations of public funds in future.

Exchange between science and practice

Like Senegal, Benin has to deal with the impacts of extreme weather events more frequently. In 2010, for instance, extreme rainfall caused flooding. There was serious damage to infrastructure, transportation, schools, medical facilities and houses. Sixty-two percent of Beninese municipalities and 680,000 people were affected by the inundations. There were 46 deaths. Flooding that occurred between 2011 and 2016 destroyed over 140,000 hectares of arable land.

That is why farmers and processing companies are now taking an interest in climate change. Poorer harvests due to irregular periods of rainfall and drought, damage to storehouses or warehouses and increased energy consumption because of the need for more cooling all lead to higher costs, explains Camarou Bello from Benin’s Chamber of Commerce and Industry. “It will become more difficult for us to create jobs and income if we do not face the risks from climate change,” the economist warns. In order for him to be able to keep performing his duties and provide information to companies, he expects public institutions to do a better job of sharing relevant research results with businesses. He also believes that such data should be made digitally available.

In the Ministry of Living Environment and Sustainable Development, which is responsible for leading adaptation efforts, experts observe a big gap between those who produce information about the impact of climate change and those who are supposed to use this information for policy or economic planning. If it were up to Médard Ouinakonhan, the ministry’s head of climate change adaptation, more scientific studies should guide policy decisions in Benin: “Just like the Intergovernmental Panel on Climate Change (IPCC) supports the Framework Convention on Climate Change.”

In order to meet the demand for improved cooperation between science and policy, the project supports in both countries the set-up of committees that will be composed of representatives from the ministries, the private sector, the scientific community and civil society. Together they will define the need for and scope of scientific analyses and will accompany the research step by step in order to assure that it is useful for policy planning and the private sector. Everyone involved will also receive training on the topic at the same time.

Climate science has had a decisive impact on the global climate policy agenda of the past 20 years. In many West African countries, however, the national research institutes have not yet been well integrated into the development of adaptation strategies. As a result, political decision-makers lack knowledge about how many adaptation measures should be implemented, what techniques are needed, what the associated costs and benefits are and what policy actions should be taken. Interdisciplinary cooperation between practitioners and close collaboration with research institutes during the development of specific adaptation measures are both essential to reduce the threat of climate change to people and nature.

Till Below is a planning officer for climate change adaptation in GIZ’s Competence Centre for Climate and Environmental Policy.
till.below@giz.de

Both authors are expressing their personal views in this article, not official GIZ policy. Benoit Odjougbèlé, Ndiaga Diop and Amadou Touré of GIZ contributed to the text.

Experts debate on how to achieve green economy