Around the world, forest areas tend to be haunted by violent conflict. In the Amazon basin, settlers are displacing indigenous communities. In the Democratic Republic of the Congo, various militias thrive on the exploitation of natural resources. In central India, a Maoist rebellion has taken hold. Nandini Sundar of the Delhi School of Economics explained the background in an interview.

contributed to D+C/E+Z in summer of 2020 as professor of sociology at the Delhi School of Economics.
Twitter: @nandinisundar 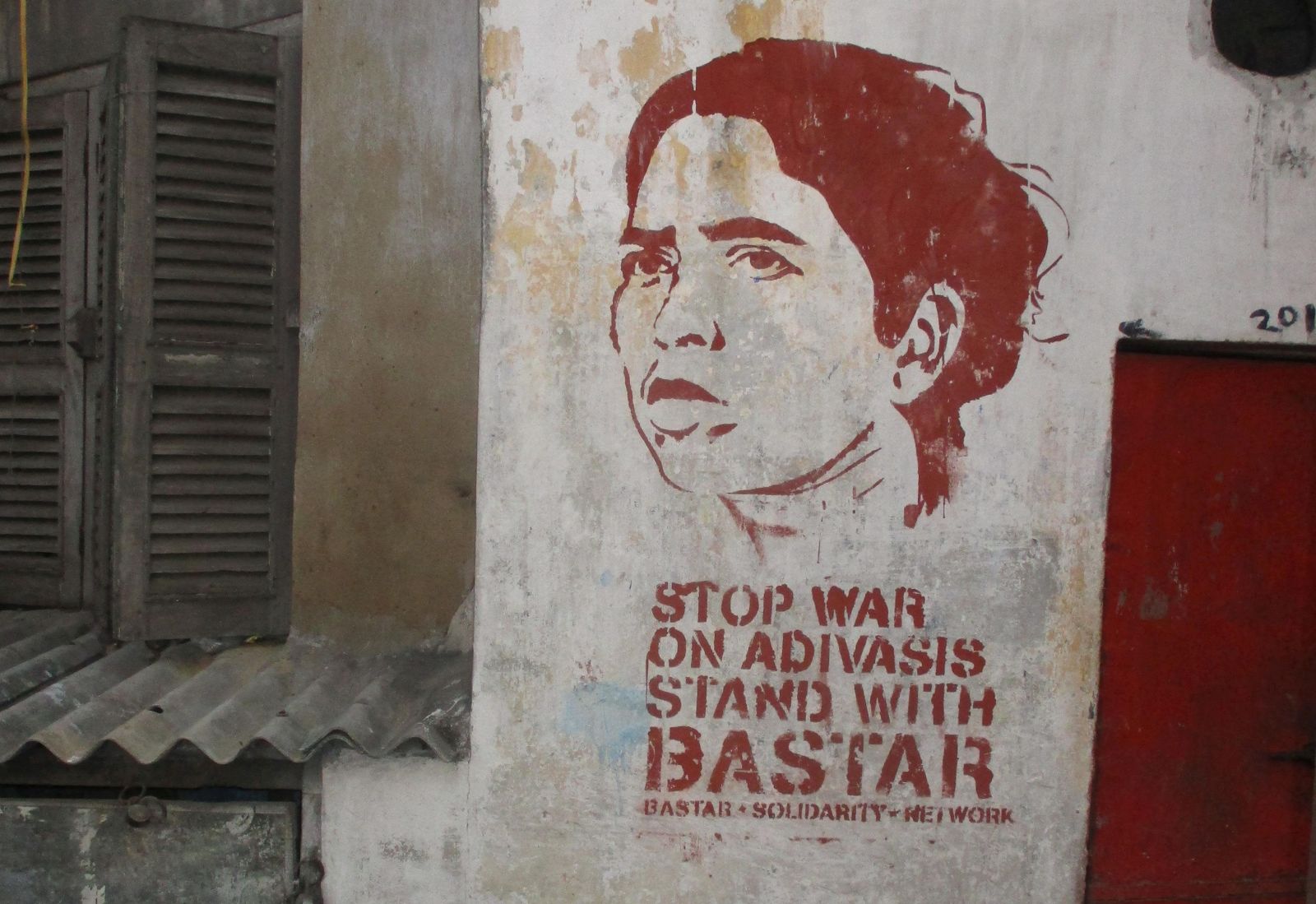 dem Wall painting expressing solidarity with Bastar in Kolkata in 2017.

Why does violent conflict so often rage in primary forests?
There are several reasons, including the demand for land, timber and other forest products. Moreover, mining companies want to exploit coal, ores and minerals. Powerful interest groups are thus involved, and the local people, who live in the forest, are typically not considered relevant. Indeed, policymakers often find wildlife tourism more important than local people’s welfare. The big issue is always who controls forests and exploits the resources.

Does it add to problems that natural forests are almost by definition remote areas where the state is hardly present? The local people are not connected to networks of influence. Often they speak different languages and have cultures of their own.
Yes, forest communities are mostly disempowered. Where and when the state is present, moreover, it mostly takes sides against them. In India, the officers of the forest department have police powers. They can arrest people and search homes. They are not accountable to those who live in the forests and know that they basically enjoy impunity. Of course, things differ from country to country. But almost everywhere, informal militias, paramilitary outfits or private military-service corporations like DynCorp or Blackwater – now called Academi – play a role.

A decade ago, India’s then Prime Minister Manmohan Singh declared that the Naxalites, Maoist insurgents, were your country’s greatest security threat. His government launched Operation Green Hunt to suppress them. Was it successful? The Naxalites aren’t making headlines anymore.
Well, not having headlines is part of how the security forces manage this conflict. They mostly prefer not to discuss the violence in remote parts of the country at all – unless something has happened that makes them look strong. Violent encounters still occur sometimes. The region that has been most affected by guerrilla warfare is Bastar, a district in Chhatisgarh State, where the military now has a camp every five kilometres. The troops are all over the place, but the villages still have some autonomy and there is clandestine activity. The situation remains tense and Operation Green Hunt is still going on.

Historically, Adivasi tribes populate India’s forests. They speak languages of their own and do not traditionally adhere to Hinduism. Do the Naxalites mobilise people along identity lines?
Well, their presence in central India’s forests became a big issue in the early 2000s, and I don’t think it was Maoist ideology that attracted people as much as the feeling that their livelihoods were threatened. They wanted protection from a predatory state. The Naxalite leaders learned Gondi, the major Adivasi language spoken in Bastar, and the majority of the cadre are now local. Identity politics of that kind may play a role at the grassroots level, but that is not the rebellion’s raison d’être. And even though the current national government demands Hindu dominance, the conflict is not about religion either. On the other hand, Adivasi belief systems are typically linked to natural resources, so any attack on those resources can be read as an attack on the religious faith. However, there are many Adivasi who do not support the Naxalites as well as many members of other marginalised communities who do. Generally speaking, Naxalites have been particularly successful in mobilising Adivasis and Dalits, the members of India’s lowest castes, who were called “untouchables” in colonial times. To some extent, Maoist outfits also reach out successfully to other poor and marginalised communities. India’s stratified society has many of them.

Today, Narendra Modi is India’s prime minister. Does that make a difference?
The answer is both yes and no. On the one hand, all parties are complicit in oppressive action. The Naxalites have a long and violent history that goes back to the late 1960s. They always called for a violent overthrow and mobilised oppressed communities, and were met with ever more violence by the government. There was never any serious attempt by the state to broker peace or to alleviate the grievances that they thrive on. Even the major Communist parties resented them right from the start. On the other hand, the Hindu-chauvinists of the BJP, Modi’s party, are especially intolerant of minorities, including Adivasis and Dalits, even if they have some token leaders among these communities. The BJP is very militaristic in its approach, while the Congress is more divided between a carrot and stick policy. It is primarily the BJP which was responsible for the escalation of violence in Bastar from 2005 on. It was running the state government and had links to very brutal vigilante groups. The Congress-led national government at the time supported them. Today, the Congress is running the state government and the BJP the national one. The atmosphere in the state is a little more free for journalists, civil-society activists et cetera but the war on Adivasi villages continues. Other states – from West Bengal and Odisha in the east to Maharashtra in the west  –have been affected by Naxalite violence, but things never escalated as they did in Bastar.

The scenario looks depressingly bleak. Are there any positive lessons India can teach the world community?
Yes, there are. Sustainable forest management is possible. There has been a lot of good experience with empowering local people who understand the natural environment and know how to exploit forest resources without destroying the ecosystem. If and when the authorities adopt their approaches and support their efforts, the results tend to be very good – without bloodshed or other human-rights violations. It is wrong to think that we must either destroy the environment or not have any development at all. More nuanced approaches are better. The bad news, however, is that our governments – whether at the national or state levels – still believe the choice is binary. It is particularly frightening to see the Modi government once again prioritising industrial growth over everything in the Covid-19 crisis by giving environmental clearance to mines, abolishing protective labour legislation et cetera. The government’s treatment of workers was appalling with millions of workers stranded without food or shelter during the stringent Covid-19 lockdown, many of whom were forced to walk home to their villages, thousands of kilometres away. Modi is siding with the big corporations and the dominant castes. With so many migrant workers returning home to their villages, we need imaginative models for rural development and livelihoods, but the government is oblivious.

Nandini Sundar is a professor of sociology at the Delhi School of Economics and the author of “The burning forest: India’s war against the Maoists” (London, Verso, 2019).
Twitter: @nandinisundar
nandinisundar.blogspot.com