Cooperation of the future

Achieving global development goals will require the combined effort of the international community. All countries have something to contribute, and all have something to learn. To mobilise the funding needed, it is necessary to form the kind of global partnership that the UN outlines in the 17th Sustainable Development Goal (SDG). New financial institutions are playing an important role in south-south cooperation.

last contributed to D+C/E+Z in autumn of 2020 as an independent development consultant and former GIZ senior manager.

last contributed to D+C/E+Z in sommer of 2019. She is responsible for emerging countries and triangular cooperation at Germany’s Federal Ministry for Economic Cooperation and Development (BMZ).

contributed to D+C/E+Z in summer of 2019. He works for GIZ and specialises in matters relating to south-south and triangular cooperation. 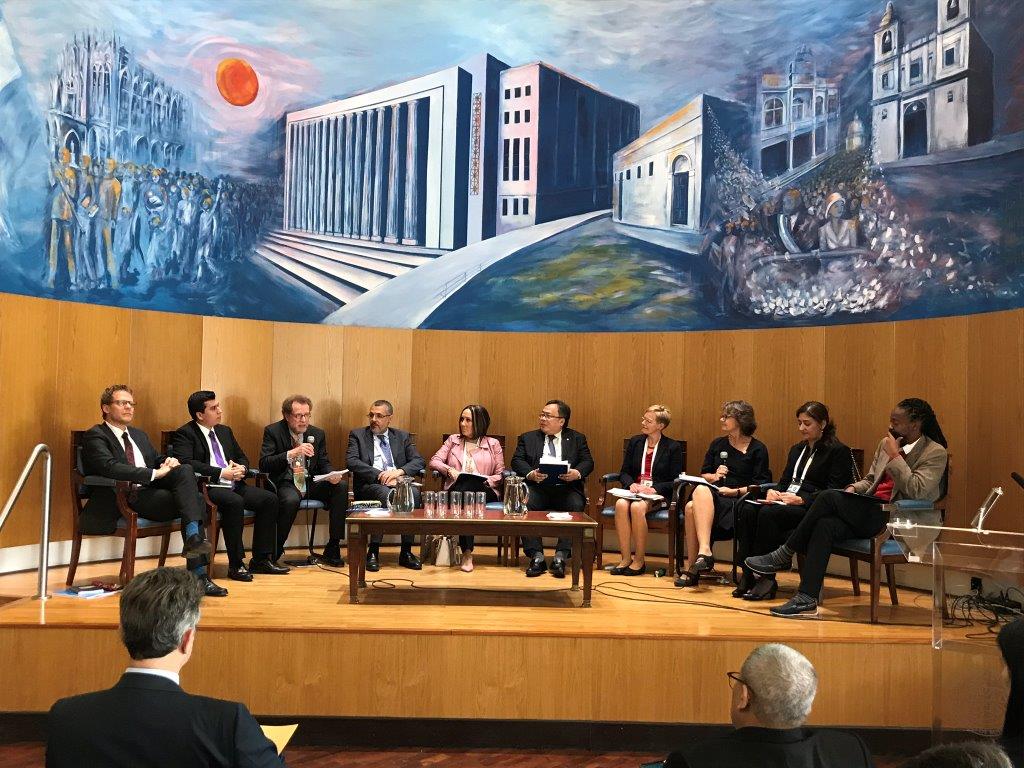 Felipe Rossi Schmechel An example of new forms of cooperation: a joint Paraguayan, Indonesian and German side event at the BAPA+40 conference.

The global south is making increasingly significant contributions to global development. The economic and geopolitical relevance of many countries has grown. In the past, south-south cooperation focused on sharing knowledge and building capacities, but the countries of the global south and new financial institutions have recently also become increasingly active in development finance. Triangular cooperation, which in many cases involves a developing country, an emerging market and a traditional donor country, is becoming more common as well.

In order to improve conditions for success, representatives from 160 countries and numerous organisations shared experiences at the UN Conference on South-South Cooperation (BAPA+40) at the end of March in Buenos Aires. Participants also discussed how their experience in this field can serve the implementation of the SDGs.

The existing controversies about south-south and north-south cooperation have diminished but still prevail. This became clear in the resistance some countries articulated against mentioning – as it was finally agreed – development effectiveness and triangular cooperation in the conference’s final statement. Other controversies that came up in the final debate had no influence on the text of the statement. Some countries questioned the legitimacy of the current Venezuelan government, which caused others to reiterate the principle of non-interference in domestic affairs. On the other hand, the USA claimed its right to go its own way in regard to climate issues and international trade.

It is a good sign, by contrast, that the principle of national policy ownership is now generally accepted. In Buenos Aires, Maria Fernanda Espinosa, the president of the UN General Assembly, called for overcoming paternalistic and vertical models of cooperation. She stressed that cooperation should make use of each country’s strengths. This also corresponds with the experiences of north-south cooperation and is a precondition for knowledge sharing and mutual learning.

Building infrastructure and financing relevant projects is of crucial developmental relevance. The rise of south-south and triangular cooperation means that funding requirements are growing too. In addition to bilateral development banks such as Brazil’s BNDES (founded in 1952, headquarters in Rio de Janeiro) or South Africa’s DBSA (founded in 1983, headquarters in Midrand), other financial institutions were founded in emerging markets at national, regional and global levels, not only in recent years.

One example is the China Development Bank, which was established in 1994 (headquarters in Beijing) and is increasingly involved in financing projects in the global south. The BRICS countries (Brazil, Russia, India, China and South Africa) created another financial institution four years ago: the New Development Bank, which has its headquarters in Shanghai. Initially this bank was exclusively active in the BRICS countries, but this year it announced that it would expand operations to non-members.

Another milestone was the creation of the Asian Infrastructure Investment Bank (AIIB) in Beijing (see Kathrin Berensmann, Focus section, D+C/E+Z e-Paper 2016/04). It was a Chinese initiative; other nations were invited to participate. The AIIB is a new multilateral institution that is relevant beyond Asia. It has even begun to lend to European countries. It is expected to contribute considerably to financing projects related to China’s enormous infrastructure investment programme, the Belt and Road Initiative, or the “New Silk Road” (see interview with Doris Fischer in the Focus section of D+C/E+Z e-Paper 2019/07).

In 2015, Britain, Germany and France were among the countries that decided – against the urging of the United States – to become shareholders in the bank. The AIIB began operations in early 2016; it now has 97 members. As of the middle of last year, it had invested $ 5 billion in 28 projects in 13 countries, with a focus on infrastructure. Initially the AIIB co-financed projects with the established multilateral development banks, but it is now gradually adopting projects of its own. Experts criticise, among other things, its lack of transparency with regard to lending, its failure to properly monitor the effectiveness of its own standards and the limited influence of the non-Chinese shareholders (see Cema Tork in Monitor section of D+C/E+Z e-Paper 2019/06). Today Germany is the fourth-most important shareholder.

Among the established development banks, the Islamic Development Bank (IsDB, founded in 1975, headquarters in Jeddah, Saudi Arabia) gives an example of how to connect development finance and triangular cooperation. Its “Reversed Linkages” programme is designed to find funding for policy measures that applicant countries consider essential. In the future, the IsDB wants to cooperate in this programme more with rich nations like Germany.

Japan pioneered triangular cooperation. Nowadays, Germany is playing a prominent role as well. According to OECD data, Germany is involved in more than 100 such projects. In Buenos Aires, speakers emphasised the strategic advantage of triangular cooperation: it builds trust and better relationships between governments and other actors. Speakers also stressed that private-sector companies, think tanks and civil-society organisations should be involved in planning in order to “ground” projects. It is generally accepted that mutual accountability of all parties and joint action are the founding principles of successful triangular cooperation.

A core message of the conference is that south-south and triangular cooperation are important for achieving the SDGs. They should be enhanced and applied more frequently. For the system of official development assistance (ODA), this provides opportunities and challenges. One serious challenge is to overcome the often as unilateral criticised paradigm of aid towards a cooperation on equal terms. Thus, triangular cooperation could become the development cooperation of the future, in which countries participate that have graduated from ODA eligibility.

Ulrich Müller
works for GIZ and specialises in matters relating to south-south and triangular cooperation.
ulrich.mueller@giz.de